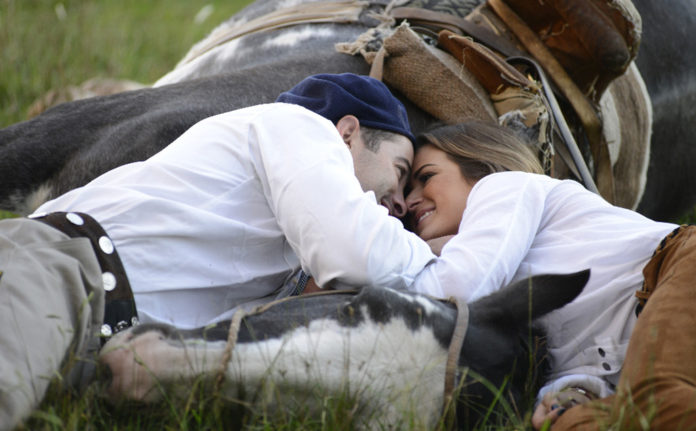 Guys I need to be honest with you… Not having the show on last week really threw me off my game, but not just that, I totally forgot Alex existed. So, imagine my surprise when that angry little man was not only still around, but still pretty damn angry. As for what else went down this week, I seriously hope none of you have equinophobia – fear of horses – or fear the word “front-runner,” because there was a lot of both.

We say goodbye to Buenos Aires and we headed to the Argentinian countryside, which is shockingly more beautiful than I could ever imagine. But first, Chris Harrison stops by to inform the guys JoJo is strong, independent, and smart, because otherwise, how in the world would they know? Honestly.

Horses and heartbreak apparently go hand in hand on this show, so let’s just get it already and discuss all the times we were utterly annoyed with The Bachelorette last night.

Angry Little Man (Alex) And His Non-Shakespearean Way With Words

Oh, Alex… This lil’ guy tried his very best, but unlike a GMC truck, he wasn’t built to last. Damn, I’m good. JoJo and Alex play a game of Thumb War in the car, and Alex intelligently questioned, “Is this wheat?” when passing by a field of wheat. That’s a facepalm if I’ve ever seen one. Needless to say, knowledge was lacking on this date, as was chemistry. Quite frankly, not even his brilliant revelation about trees could save him: “I like those kind of trees. The one that’s, like, droopy…” I don’t know about you but I would rather stick my head up an elephant’s ass and live in there for 48 hours than listen to anymore of his  horseshit.

Of course, the most cringe-worthy part of this date was when Alex and JoJo spooned a passed out horse who was clearly not paid enough carrots or apples to appear in this episode. The pair ended up kissing while lying on their friend’s neck, which was cute. You know…if you’re into that kind of stuff. Anyone? Don’t all raise your hands at once.

Jordan and JoJo Get To Taste Each Other’s Feet

So we have some good news and we have some bad news. Good news: Their date was much steamier than her date with Alex. Bad news: It was just as horrifying, they might as well licked each other’s toe lint. For their date they got to squish grapes with their feet – which definitely were not, I repeat, were not cleaned beforehand. This could have been a cute date had they not immediately drank their foot juice, and said “I tasted your feet today.” Gag me now. Grapes are dead to me, from now on I want my alcohol distilled exactly 26 times and lit on fire before putting it anywhere near my mouth.

Since the group date got rained out they did what any polyamourous squad would do: hang out in a hotel room and play Truth or Dare. James shoved a whole bunch of weird ass looking fries in his mouth to “impress” JoJo but Robby stripped off his clothes and mooned his friends.

Compared to JoJo’s other dates this week, Luke’s was a total bore – although there were some adorable moments, and honestly, the fact that they were able to hang around horses without using their warm bodies as a stage for love-making was a relief. Anyway, these two basically spent their day riding ponies and skeet-shooting, oh, and Luke told JoJo that he wants to “open chapters” with her. Cool, sounds great, moving on.

Thanks to Alex taking one for the team by being sent home after his date with JoJo, she luckily only had to breakup with one boyfriend this time. Said boyfriend was James Taylor – shocker. The poor guy literally wept his way out JoJo’s life, and the saddest part was when he said “I hear that kinda a lot. Like ‘Oh, you deserve a great girl.’ And for some reason, I never get to get one.” Well bud, that’s kind of what happens when you try to sabotage the “front-runners” in this game. Not everyone is born a hero, so let this be a lesson for you.

We are finally down to the final four men who get to go through to hometown dates. You know what that means, right? That we are so much closer to this season being over. Thank f*cking God. Is it just me or does it seem like this season went from 26 men to like 4 overnight? I mean it’s totally fine by me, the sooner we can end this show the sooner I can go back to drinking for fun.

So, that’s it, guys. We’ve made it through another week and we’re heading straight into hometowns. I wonder who the front-runner will be next week…

If you need me at all, I’ll be booking a trip to Argentina to spoon with a horse.