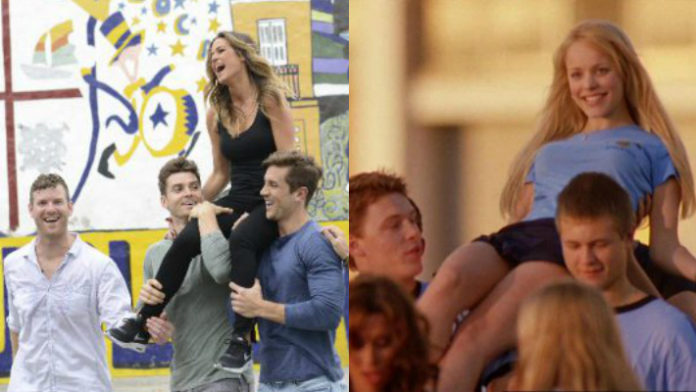 From Uruguay to Buenos Aires, we set out to explore places no one can seem to pronounce. This week, JoJo takes the guys to Argentina, where she will take two of them on this season’s record-setting second two-on-one date, and, the place where JoJo discovers that draping a jacket over your shoulders is a “fun fashion thing”. Personally, it looks stupid AF, but that’s just my opinion…and WHY IS EVERYONE WEARING A GODDAMN LEATHER JACKET?!

Arriving in Argentina in full cocktail-party attire, JoJo heads out to meet up with Chris Harrison, on a park bench…clearly, ABC producers realized they need to actually show his face this season. With both of them dressed to the nines, Chris reminds her she’s about at the halfway point of the season. No shit Chris. Then they discuss the irony of JoJo potentially falling in love with two people. Although, the real irony would be her saying “I love you” to two people.

But let’s face it, the real irony here is how the men of The Bachelorette are eerily similar to the characters of Mean Girls. So, why don’t we focus on that:

Definitely acts super confident in himself, feels like he’s got it in the bag so he doesn’t have a care in the world. Cares more about himself than he does others, may even be in this for the fame/reputation.

Really wants to be a part of the Plastics but they’re shutting him out and he’s starting to get bitter. Derek got quite possibly the most SAVAGE exit in Bachelorette history.

Robby trying to spell margherita was really all the evidence we needed for this one. And after his mind-blowing attempt at nothing but pure epic failure, I need a margarita.

From asking JoJo if she’s going to kiss Wells on their date, to creeping everyone out, and making everyone feel uncomfortable. It’s all a little too intense. Coming on a bit too strong, Luke. No but like seriously, back off.

For real though, Chase’s face does not move. Like ever. There are literally zero facial expressions going on. So like, does he honestly give any f*cks?

He’s a bit of a manservant really. Jordan’s right hand man but a little too desperate. Like, he should totally just stab Caesar kind of thing.

He doesn’t even go here! James Taylor isn’t feeling like he belongs in this episode. He definitely feels like the outsider amongst all the super-ripped brochachos. He decided to do the stupidest thing ever and run to JoJo complaining about how mean Jordan was to him during a poker game. He probably wishes they could all get along like they used to in middle school. He might even wish he could bake a cake filled with rainbows and smiles and everyone would eat and be happy.

A super innocent babe, not understanding how this all works. The last guy to kiss her. He clearly didn’t understand that you have to maul her, like a lion, repeatedly to make an impression. Also, they were sweating profusely on their date, you would’ve guessed they were somewhere deep in South America. Kind of gross. He’s definitely an outsider who is not 100% sold on this process like some of the other guys are.

So now that we’ve established the men of Bachelorette and their alter egos that are the characters from our beloved Mean Girls, we should definitely discuss who Chris Harrison is…

Well party people, now that most these guys are hopping on the train to I-Love-JoJoville, it’s safe to say we’re definitely going to have at least one more week of this f*cking shit. I really don’t know why but I keep hoping that this specific show will just internally blow up and never exist ever again…

Unlike JoJo, I’m not excited to do this all again next week. So, if you need me between now and then, I’ll be convincing all my friends to update their dating app bios to include the requirement that eligible men must know the meaning of “entitled” and how to spell “margherita.” (And also make a margarita.)

Feature Image via screengrab from The Bachelorette and Mean Girls.

Why The Saying ‘Time Heals All Wounds’ Is Complete Bullsh*t

These Scary Statistics Prove Ghosting Is Becoming More Common By The...