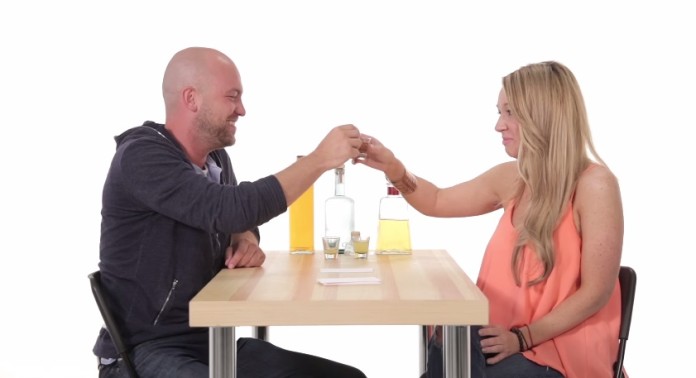 “Exes and alcohol make for a great combination.” – said no one…ever.

Cut Video is at it again after filming videos including: Grandmas Smoking Weed For The First Time, Ex-Cops Smoking Weed, Truth or Drink (Parents & Kids), and Truth or Drink (Couples). This time around they somehow managed to convince a few brave souls to reunite with their exes to play a twisted game of ‘Truth or Dare’ called ‘Truth or Drink’. Yes, it is exactly what you think it is, you either answer the excruciatingly uncomfortable questions or take a shot. Personally, I think they should ditch the shot glasses and take that bottle straight to the face. But that’s just my opinion.

I would also want to switch up the game a little bit by throwing my own questions in there, such as: “Was it wrong that I celebrated our break up?” “Can I have my cat back?” “Do you understand why people thought you were a piece of sh*t now?” “You still never told me who the f*ck is Karen?” “You’re not going to finish that bottle, right?” You know, the necessary questions…

Grab a bottle of literally anything and get ready to take as many shots as these former couples and think…what you would ask your exes?

Featured Image via screenshot of Truth or Drink (Exes).