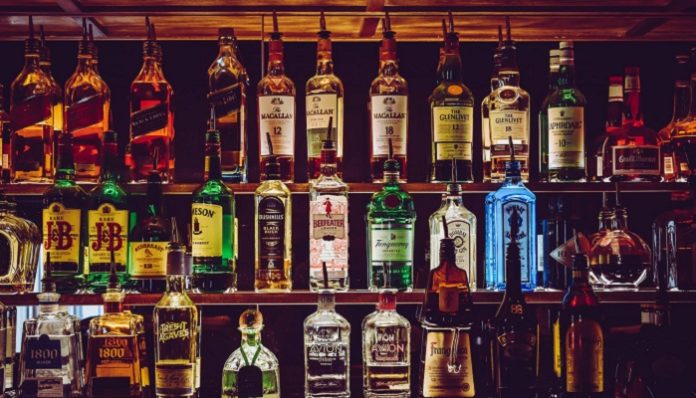 I am currently young, kind of single-ish and living the dream, but lord knows if my boyfriend was an alcoholic beverage I would be married, committed, and never turning back. There’s just something about that particular love buzz that I cannot get enough of.

With alcohol, you wouldn’t have to settle for merely one beverage, oh no, you could have a bit of Pedro (Sex on the Beach) on a Monday and cheeky bit of Brian (Banoffee Pie) on a Tuesday evening. Monogamy? Who gives a damn about that, all bets are off when whisky is involved.

The pressure of getting your freak on no longer exists; if you’d rather have an early night, you can just kick Mario (Tequila) out of bed and pull Gregory (Bailey’s) under the covers for a nice, comforting spoon. As the wise woman I am, I’ve decided to enlighten you on what certain alcohols would be like as boyfriends (that you would inevitably cheat on because you can’t stick to vodka for the rest of your life).

When all else fails, you can always rely on Vodka to save the day. Yes, Vodka seems to be you’re drink of choice, you’ve ordered MANY vodka spritzers in your time… but there’s a reason for that.  Vodka is a brilliantly versatile man, you can shoot him, mix him, gargle him; the possibilities truly are endless. You can always trust Vodka to get the party started and ensure you have a good time, but there is just one problem. When Vodka lets you down he let’ you down HARD, and it will be bad; it will be very bad. It’ll just sneak up on you and then BAM (you know what I mean), it will tear your whole life apart. Damn you Vodka. You won’t leave him, because as much as the betrayal may hurt at the time, you can’t resist but to go back to him. Even as you’re frantically trying to recover from the pain, you can’t wait to mix him again with a bit of cranberry and orange, and have some good old sex on the beach.

You’re sick of the boys now; you want a man who knows how to take care of you. Enter the Whisky if you’re feelin’ frisky. Established and strong, Whisky will set your heart on fire. The older the better is the case with this one. A little less versatile than Vodka, you are more at risk of being burned, but you love the risk. Admit it . You’ve always been too scared to give him a try, but as he burns his way through you, you’ll find yourself taken aback. The burn is palpable, sensational even and he makes you feel like a REAL woman, in a way that no other alcohol ever could. Don’t be afraid of the intense feelings though, Whisky is the Christian to your Anna, whatever pain you feel will soon be replaced with pleasure.

I’ll start off by saying I’m biased with this one. Captain and I are currently partaking in a steamy affair, and I can most certainly recommend a cheeky sip. If you’re looking to add a bit of spice to your life, Morgan my friend, is the one for you. Sweet and smooth with a bit of a kick Captain Morgan is passionate beyond words and can revive one’s libido in a second flat. Can you trust him? No. But you don’t need to, because chances are you’re probably already in a committed relationship with Gin, and Morgan’s just your cheeky little tease on the side.

Bless him, he’s technically just as strong as all the other men but maybe tends to be a bit more dull. My advice to you? Give him a chance. Often left on the sidelines and relegated to the friend-zone, Gin is the most loyal of the lot. If given the opportunity he will make you oh-so-happy. More of the button up type, he’s dependable, caring and makes you look like a responsible human being (even if you’re not). But be warned, if you do decide to stray from him, he will get his revenge in the form of the evilest of hangovers (watch out for the Captain).

Your dad loves him, your mother does not. “You can do better than Kopparberg my dear”, but you don’t care. You’ve been burned by so many spritzers in the past that you’ve decided to go back to the cheap and common old faithful. Yes, he gives you wind and makes you less lady like, but you know that he will always be there (even when you leave him for a spirit). You know at the end of the night when it’s all went wrong, you can have a sip of him and he’ll make it all better. Even if only for a little while. This temporary honey will stick it out with you til the end.

Technically not a boyfriend; Tequila is the unfortunate one-night-stand. You know you shouldn’t, you know it’s wrong, but after a bad breakup or a few too many rejections, you’ll find yourself shooting him back like you’ve been craving. You will regret it, and you will feel dirty afterwards, but alas you will do it again and again. The cycle will never end.

So what are you waiting for? Embrace your inner boozehound, and get your alcohol freak on. Mix them, shake them, sip them, shot them…DO IT ALL. Don’t be afraid to try new things, relationships are all about trial and error, so experiment; if you don’t like it don’t drink it, but you won’t know unless you try. Like all things though, stay safe, if you find yourself in a toxic relationship with alcohol don’t be afraid to take a time out, alcohol celibacy is officially a thing, embrace it. And for everyone else remember every hour is happy hour somewhere in the world, so drink up, unless you’re have lectures, then only drink up a little bit.

Why You Should Open Your Heart To Change With Every New...