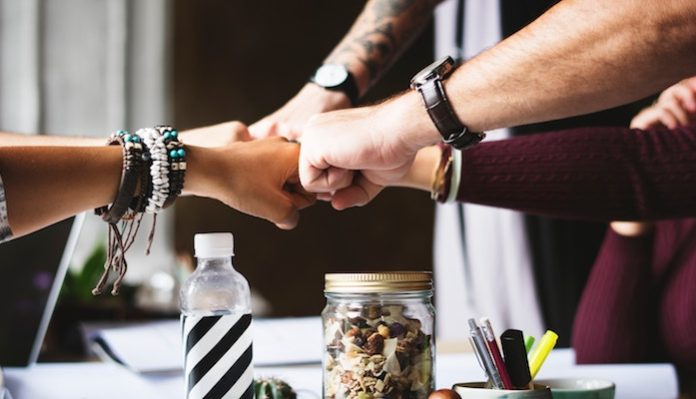 What is a safe space? Well, a safe or positive space is an environment where an individual (or group of people) can feel confident that they were will not exposed to violence, criticism, harassment and other forms of oppression. However, I must mention that the use and mobilization of the term ‘safe space’ means different things to different people and communities. However, this is the most hegemonic definition of the term.

As we were told growing up, it is the language and words we use that can be harmful to others. They have the power to oppress, demean, and cause severe mental trauma. We must communicate responsibly with accountability for what we say and do.

Unfortunately, people often overlook the weight of their words. This can cause an unsafe, tense, dangerous, or even detrimental workplace and jeopardize worker’s mental health. I believe every employee has the right to a safe space, and anything short of that is precarious labor. When we think of a safe working environment, we imagine ‘the right to refuse unsafe work’ like lifting heavy loads or operating heavy equipment. However, dangerous workplaces are far more widespread than people think. It’s in the words, tone, and cadence we use to communicate.

Here are some ways to ensure your language is inclusive and progressive so everyone gets to feel safe and comfortable in your workplace.

If you don’t know how someone identifies, do not assume someone’s gender. I know this might be difficult to some older folks, but it’s really quite simple. Do not use her/she pronouns or he/him pronouns for someone until you know how they identify. Just because someone walks into your work dressed head to toe in bright pink with a bow on their head, does not automatically mean they identify as a woman. There is a difference between gender identity and gender expression. There are many trans or nonbinary peoples who do not identify as female but absolutely love dressing femme! So please, be respectful and use gender neutral pronouns (they/them/theirs/everyone/folks) until you know for certain.

Also, don’t assume everyone around you is cis-gendered and be mindful when discussing topics that regard trans folks. IE: “So if I think I’m a pig does that make me a pig?” argument, or “Such a shame she was such a pretty girl before….” or “You must be crazy to do that to your body”…NOT OK. It’s not just ‘your opinion’ is transphobic and oppressive. You never know who is listening and will be hurt by this.

Ah, misogyny; the bane of my existence. I do not want to be called ‘hun, sweets, dear’ by a man (or anyone for that matter). It’s gross, tacky and sexist. Do not automatically assume a woman can’t or wouldn’t be interested in certain task based on her status as a woman. It’s nonsense. Do not comment on my clothing or give me unsolicited relationship advice. Do not speak over me when I am speaking and definitely do not interrupt me. Don’t take credit for my work or make sleazy jokes about other women to me. Oh, also, don’t you dare “compliment” me by putting other women down (IE: You’re not like other girls). No? Damn, I wish I was because women are pretty awesome and also fuck you.

Let’s also remember women can reinforce patriarchal sexism as well IE: slut shaming or attempting to distance themselves from ‘typical’ women. Ladies, let’s raise each other up, not tear each other down. And remember, every time you victim-blame, gossip, or demean other women, at least one woman listening decides she can’t trust you. Trust is often a huge part of working with your co-workers, so be careful.

Look around your work…..do you see any people of color? What types of positions do they have? What type of labor are they doing? Or maybe you don’t see any and it’s just a bunch of white people…..big surprise. These are not coincidences. If you only have one person of color in your workplace, it’s probably a really shitty idea to ask them to speak for their entire racial community, or even worse, racialized communities in general.This completely dismisses the thought that racialized folks are different and just serves to homogenize their experiences and ideas. Not cool. Also questions like “where are you from…like…originally?” or statements like ‘you’re so pretty for a black girl’ are super fucking racist. You know what’s even shittier than being racist? Claiming reverse racism. It’s not a thing. It will never be a thing. Stop it. Implicit racism can also take the form of only catering to or celebrating Western, hegemonic holidays and events. Work towards a more inclusive work space. Do your research on how to include other types of holidays in your workplace. For example…. if someone in your workplace is beginning Ramadan, a great idea would be to do some research (or ask) on how they can best be supported during this time. Joking about offering them food at lunch hour? Not funny.

If anything you say is prefixed with “I’m not racist but…” or “I love all races but…” or “I don’t see color but…” What you’re about to say is probably super fucking racist.

Making light out of severe mental health concerns or downplaying their effects is fucked up. To do it in the workplace puts so many people at risk. Here are just a couple statements you should never ever ever tolerate in your workplace, EVEN if your workplace supports people with disabilities.

“That is so retarded”
“I had so much work to do last night I wanted to kill myself”
“I couldn’t find a matching sock this morning, that just my OCD again!”
“Ya I’m moody before I get my coffee then I’m fine, I’m so fucking bipolar”
“They called in sick again? She’s not even sick. She’s milking it”
“Ummm a mental health day? I wish I had a disability so I could take one”
“Can’t find a place to park but, 16 handicapped parking spaces, 16! God I wish I was handicapped”
“He looks normal, he can’t have a disability. Scammer. Is that what our tax dollars are going towards?”

If I were a boss, these would be grounds for immediate termination. People with disabilities is one of the largest marginalized group of people. Considering some disabilities are invisible to most people, you never know who identifies with one. So educate yourself and think before you speak.

These are just a few ways you can make your workplace more inclusive. I must note this is only a glimpse into some of the bullshit people have to deal with in the workplace. You have the power to make it a good environment or a toxic environment. Choose wisely.