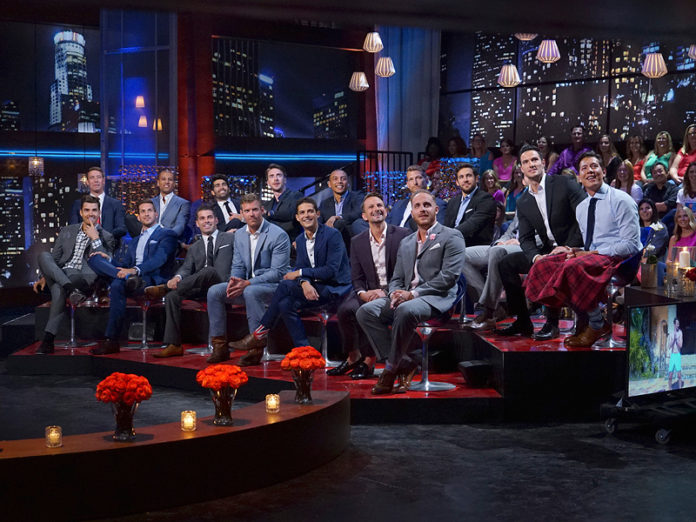 Grab a massive goblet of wine, and prepare for some male drama because these rejects are spilling some protein shake. Thee broken-hearted men sit around with Chris Harrison for The Bachelorette: The Men Tell All special while they get some closure with their beloved ex JoJo.

Burning questions that we were eager to learn the answers to were as following: Will Evan the Erectile Dysfunction Specialist finally get a new shirt? Will Chad make love to a deli meat platter during commercial breaks? And finally, will Dan the Canadian leave us with any more insightful words of wisdom? We can only hope.

A season’s worth of pent-up feelings come to a breaking point during The Men Tell All special, so, naturally, here’s all our thoughts we had during last night’s episode:

Jonathon…still wearing a kilt I see.

2. If we’re basing this off applause, my God these women are going to tear Luke’s clothes off in shreds.

4. Re-watching Chad be Chad is like having an acid flashback.

5. I’ve never heard so many men call each other bitches…

6. Alex, Alex, Alex…I used to like you, but even now after the show you’re still causing trouble. Tsk. Tsk.

7. But seriously Alex, go away. You can’t sit with us.

8. LOL at Wells trying to intellectually and psychologically diagnose Alex’s deal, like he just wasn’t hugged enough as a child. Wells, this The Bachelorette. You’re on the wrong show.

9. Uhhh, another thing Alex. Saying you’re just being “honest” is not an excuse for being an unbelievable asshole.

10. Is it inappropriate to use this space as an opportunity to devote myself completely to Derek? No? You’re all still laughing about his crying? Fine, I’ll go watch The Office instead…

11. Shut up Daniel. I want to throw myself off a bridge hearing you talk.

13. Ali, you were on the show for like a second. Go run off into the woods somewhere and change into a werewolf. Tell Taylor Lautner we said hey.

*Has a lifetime of nightmares*

15. *Realizing you’re only less than 10 minutes into this episode*

16. My drinking game for tonight: Every time someone interrupts someone else I will drink a pool of Moscato.

And anytime one guy calls another guy a “bitch”, I will drink a vat of nitric acid.

I wonder what will kill me first?

18. Why does Chad still do that creepy ass whistling?

19. Has anyone checked Chad’s house yet? Cause I’m pretty sure there are some fairly worrisome journals with some plans and drawings sketched out…

20. How much do you want to bet Evan mentions how Chad still owes him a shirt?

21. Everyone hated you Chad because you’re a possum covered in asshole.

24. How much money do you want to bet Chad’s voting for Trump??

26. Saint Nick about to whoop some ass.

27. I hope Chad slips on spilt protein shake or a meat platter and dies a slow and painful death…

28. “Robby has threatened her”…what the hell is Robby going to do? Style her hair with gel? Force her to tan too much?

29. Is it just me or are half of these men unrecognizable? WHO ARE YOU PEOPLE?

30. Is anyone else falling deeper and deeper in love with Wells and his reasonable and rational comments? *SWOON* Guy is a 10 in the real world.

31. I watched this episode with a psychologist who couldn’t help but diagnose Chad. “He is very ill,” she muttered over and over again.

33. Where does JoJo get her abs? Where can I get some?

34. Oh my God my heart is breaking. Stop this. Stop this right now.

35. It’s unbelievable that JoJo didn’t want to take steamy Luke into the fantasy suite. Shit girl, I’ll take him for a ride for you.

36. Andddddd America’s heart just broke all over again. Thanks ABC.

37. I hate to be dramatic, but when Luke was speaking, did anyone else suddenly transport to a rowboat on a lake filled with swans? No? Just me?

40. Did Chris Harrison just hint that Luke will be the next Bachelor??

41. So happy to watch Chase’s face NOT move.

42. How are we supposed to possibly care about Chase after Luke?

43. JoJo, you’re telling Luke that you need words of affirmation,

But Chase told you for the first time, and you sent him home…

45. I cannot watch her talk about Luke like that like he’s not there. It’s too soon. I have PTSD.

46. Think Derek’s a little too concerned about the word “reassurance.” May be time to let it go dude.

48. Oh God, Vinny don’t let your mother fight your battles for you.

49. And so glad we found out that Vinny’s mom is his pimp…

50. TBH I’m so fucking happy this show is almost over!

Alright beautiful humans, gather round and place your bets. Will it be Jordan or Robby? (Fair warning, if you pick Robby you should probably steer clear of Vegas.) One thing we can probably bet on happening is JoJo pulling a classic “Ben” and telling both her guys she loves them. We all know how much this show loves a formula.

Was watching this just as painful for you as it was for me? Probably. There’s something about grown men calling each other bitches that just doesn’t feel right. As great as this season has been, it’s quickly coming to an end, and thank f*cking God for that. Let’s be honest, JoJo is going to pick Jordan in the end. But to be honest, we don’t give a shit because neither one of the remaining guys is Luke. He’s the real MVP.

The real nail-biter here is which one of these dashing men (*cough cough* Luke) will be the next Bachelor…mainly so we can all sign up to be on the show. The next Bachelor season will actually end up being a crossover with Game of Thrones. Because girls may not care about the Iron Throne (that shit is uncomfortable) but they will most definitely fight to the death over Luke. #BloodWillBeShed (and not just because we would all be on our periods at the same time) LOL. F*ck, this show is ruining my life.

Check back next week for the recap of After The Final Rose! The Bachelor airs Monday (8 p.m. ET) on ABC.