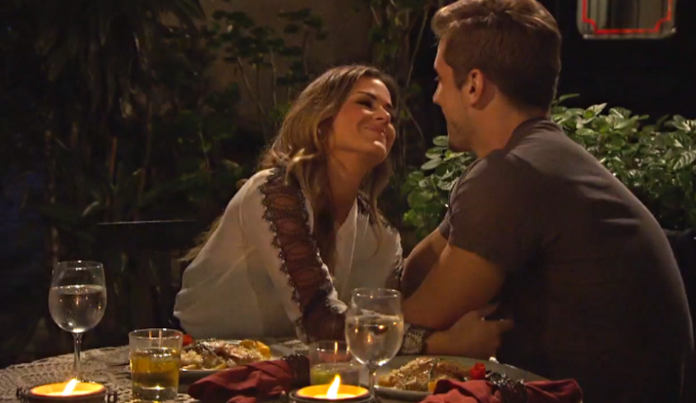 Okay. Let’s just get this out of the way now, because honestly, I’m not sure I even took in anything that happened after the first 5 minutes of this show.

Ouch, JoJo, ouch. Poor Luke knew what was coming and tried to stop it. This scene was comparable to the one where Voldemort kills Cedric Diggory.

JoJo, we need to have a talk. We were all on board with you when you were announced as the Bachelorette. We were on your side. We saw you connect with Jordan and Luke and thought, “Yes JoJo, yes. You’re doing the right thing. You’re on the right path.”

Well you’ve squandered all that good will away. You don’t know what you want. You’ve sent home the war vet, horse whisperer, straight out of The F*cking Notebook dreamboat that is Luke. You’re f*cking up and I just don’t know what to think anymore. You need to go away for a while and think about what you’ve done. You’ve boarded a one-way train to Shitville and puzzled all of us. WTF!

Let’s dive on into the questions we were all asking during last night’s episode of The Bachelorette:

1. Do you think JoJo made the right decision sending Luke home?

M: F*CK NO! That man is a God…but JoJo didn’t deserve him anyway. We’ll definitely be watching your season as The Bachelor. You broke his damn heart JoJo, I hope your last two men walk away from you. Hearing Luke say, “You didn’t want me. Holy shit.” was absolutely heartbreaking.

K: I wasn’t a fan of Luke. The man dug his own grave when he showed up for hometowns with 50 of his closest friends and the entire town in tow. I’m not dating him and even I was freaked out.

2. Won’t JoJo be worried about Robby being prettier than her if they end up together?

M: I mean come on, he’s orange like an oompa loompa, his hair – like Chase’s face – doesn’t move, he looks like Ken barbie. I don’t see the attraction, sure he’s a good guy, but ew. Also, he’s a swimmer, so he’s used to no body hair…so no slacking on shaving your legs, yeah…that’s a failure of a relationship already.

K: I think Robby is beautiful. I would marry him myself except for two reasons: 1) He would inevitably leave me for our Swedish pool boy and 2) I would get sick of his goddamn face and overly perfect smile. Also, I don’t think we’re done hearing from his ex…and this excites me.

K: I get mixed signals with this one. I’m desperate to know the deets on the beef between him and big bro, Aaron. I did some sleuthing of my own and found a little that involved Baby Rodgers’s ex. Anyway, I feel him and JoJo have a real connection and he’s the only one with a real personality. JoJo is putting up walls and it’s almost as if she’s pushing him away to see how he pushes back.

M: UGH. He’s sexy AF…and his hair moves! I think he’s in it for the right reasons (I want to throw myself off a bridge for saying that). If I were JoJo I would have to jump his bones in and around that cave and then every step on the way to the fantasy suite. I really hope my boyfriend doesn’t read this. Also, why the hell is she grilling Jordan, but went easy on Robby. What a bitch. But kudos to Jordan for taking it like a true champ.

M: Dude, don’t be a Chad. You missed her, and we all know this because you’ve said it 10 times already. She let you put your P in her V and you can’t stand not seeing her for a day. #Stage5Clinger anyone? Go do something with your life, like gel your hair.

K: Dude. Dick move. *whispers* I still love you though.

K: I couldn’t quite exactly follow what was going on here. I thought JoJo was going to throw up before running outside, where I assumed she was going to draw a pentagram in the sand to summon Chris Harrison and send Chase packing after he dropped the “L bomb” on her. She should’ve just let him go instead of bawling all over him. JoJo was kind of a dick to wait to dump him until they got to Fantasy Suite. Props to Chase… *cracks a beer and gets in the van*

M: WHAT IS HAPPENING?! What the f*ck?! “I just threw myself out there. I just jumped over a hurdle I’ve never done before, and now I’m skewered. Now, I’m shattered. I mean, what do you want me to say? You’ve 100% made me regret saying that. So, now love equals, ‘Get the f*ck out?’” Daaaaaaaammmmnnnnn. Chase gave zero f*cks on his way out. How ironic that JoJo is chasing Chase. LOL. It’s sort of funny that Chase never really had a personality up until he got pissed AF. Grabbed a cold beer, got in a sketchy little van, and cursed JoJo – probably.

6. Your thoughts on Chase’s return?

K: I’d like to start off by saying that I have no fricken idea how Chase even made it this far. However, I think the producers made Homeboy come back for the ceremony because they knew that half of the viewers were asleep by now. Seriously, pump up the drama. This season is Snoozeville. Chase should’ve taken that monkey with him as a consolation prize. Actually, scratch that. Chase wins because he’s no longer stuck in that hell hole.

M: Holy drama, even the monkey wants to know what’s going on. I applaud Chase for being a man and apologizing to JoJo. Chase has a fan, the monkey. I really wish Chase cracked another beer while leaving for the second time around. If anything he should be really happy he’s done with this show, because Lord knows we can’t wait to be.

7. What will the finale hold?

K: God, I can’t wait for this to be over. I just want my life back. This such a shitshow. Previews suggest that one of the guys really screwed her over. I think it’s Robby. JoJo cries. Like usual. Jordan wins and they all live happily ever after…for eight months or whatever. This season has the worst acting I’ve seen in many seasons. I (not so) secretly want to be on this show, and I kinda hate myself a little for it. Bring on Bachelor in Paradise.

M: I, too, can’t wait for this show to be over. I’m starting to realize my life has more drama than this stupid show, and if I were JoJo I would’ve ended this show a few episodes back. We all know Jordan and JoJo are going to end up engaged, so why carry this out any longer.

Honestly, we don’t really need to watch the rest of the show. Does anyone honestly think she’s not going to pick Jordan? Luke was the only other viable option. #LukeForBachelor.

Both Jordan and Robby got their roses, and all ended well…at least until tomorrow night’s Men Tell All special. Although I’m excited for male drama – finally – I’m also dreading seeing and hearing Chad Bro Chad talk about #ProteinShakes so fuck my life. *chants* fight, fight, fight. I’m secretly wishing for a fight to the death, ABC owes us at least that.

Check back tomorrow night for the recap of the next episode (or don’t, I don’t give a shit anymore)! The Bachelorette: Men Tell All airs Tuesday (8 p.m. ET).

Featured Image via screengrab from The Bachelorette.