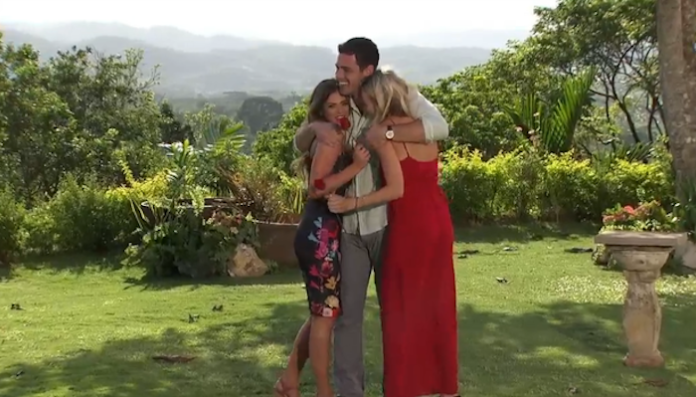 Imagine a life where you started dating a man, and at the same time he started dating 27 other women. Imagine you actually agree to this, and then after several months you may or may not be engaged to him. No way this could actually happen, unless you are cool with having sister wives. Except, lol, it does. It’s called The Bachelor: where all normal dating rules and social codes go Sayonara out the window. Let’s imagine for a second that the dating that occurs  on the bachelor was the reality for all of us looking for love. The following are 10 simple and sane guidelines on how this so-called dating would go:

Within the first moment your eyes meet, you decide you want to spend the rest of your life with him and that he is a God in human form. You often use the line, “I want to marry this man.” You also know a ton of facts about him even though he doesn’t even know your name. You start putting your name in front of his surname and can’t wait for him to meet your family.

When referring to him you say, “our boyfriend,” because he is dating 27 other women. You are also okay with the fact because, well, you don’t really have a choice. Besides, he is perfect. Not only is he dating 27 other women, but some of them end up being your close friends. You talk about your dates with him and state that you are falling in love. You even scream for your friends when he chooses them for a one-on-one date and not you.

Each week you know the day is approaching when he could break up with you. As the day gets closer, you try to make your relationship with him more solid. Love is on a timeline, and if you two haven’t grown in your love within a week, then it’s time for you to go.

You thank him because he chose not to break up with you. That’s right. He is the definition of a perfect man, so you couldn’t be more grateful he has chosen to continue kissing you and your best friends for another rocky week. Also, in choosing you he presents a rose. He doesn’t just say, “hey, we should keep dating,” but also asks you to accept a single, prickly rose because that somehow symbolizes his love.

If you don’t have some sad story that made you into the wonderful person you are today, then you probably shouldn’t date him. He expects that on your first date you will tell him something about yourself, and even if it isn’t sad, it must be delivered in a way where he thinks, wow, that’s so sad she must be a great woman. The story is your key to success and without it, you are nothing. He will see you as someone without depth, without enough layers, and who can’t open up fast enough. Tick-tock.

The benefit of dating someone alongside 27 other girls, is he has a beautiful speech in his back pocket that he is able to slightly alter to match your heart-wrenching story. He will say his speech, which shows you that he REALLY likes you. He will tell you different versions of this speech on each date, while presenting a rose, until you no longer make the cut. You may also hear a version of this speech said to a different girl right in front of you, after which they will hug and she will be presented with a rose because he wants her to stick around more than you.

Phrases like, “This has been an incredible journey,” “I’m on cloud-nine,” “I’m excited to take the next step in our relationship,” and “I am falling in love with this man,” frequently roll off your tongue. The other women are saying similar things, so you may want to take a step back and wonder how you all can be soul mates with the same person. They are probably the ones confused though, right? Besides, exactly eight days ago he gave you the validation you needed when he subtly touched your right hipbone whilst giving another girl a rose. Oh, and three days ago he looked at you from across the room. No girl gets validation like you do.

He presents you with a letter asking if you want to sleep with him. Most likely, unless you have a child, you will say yes. You say this knowing he will sleep with two other women as well, and then after sleeping with him you may be sent packing. If sent home you might question whether it was based on who performed best in bed, but you can’t ask him because you aren’t allowed to contact him. He continues on his “journey to find love,” while you go home to cry alone.

If you aren’t sent home after sleeping with him, then you might actually get to marry him. This isn’t necessarily a question of whether you want to marry him, but whether he will choose you. If you have made it this far, there really is no turning back. The supposed love of your life will be torn between you and the other woman he has slept with, in order to decide your fate. You will wait, praying he will choose you. You have been on a few dates with him, and you know other women are attracted to him, so you have decided he is the one. You don’t really have a choice in the matter because it’s all or nothing; and you choose all.

If he doesn’t choose you, you cry, move on, are best friends with the other unchosen woman, and end up dating 27 men the next year anyways. You might even spend time with him and the winner because you two are BFF’s. If he does choose you then you get to watch him on TV making out with 27 other women and telling them they could be the one. It doesn’t really matter though because you are the winner, and in the end that’s what is most important. All is good.

These guidelines make perfect sense and I’m sure you are now wondering why we don’t all resort to dating in this fashion. The rules are simple, and the heartbreak is worth it. Just put yourself out there for all the world to see, and expose your entire soul and story. Doesn’t get much more sensible than that. In reality, you know how insane this all sounds, yet somehow ABC is able to convince the world that “it works,” and is a logical path to “finding love.” But hey, who’s to judge?

Featured image via The Bachelor ABC.

To The Boy Who Left Me Feeling Completely Numb