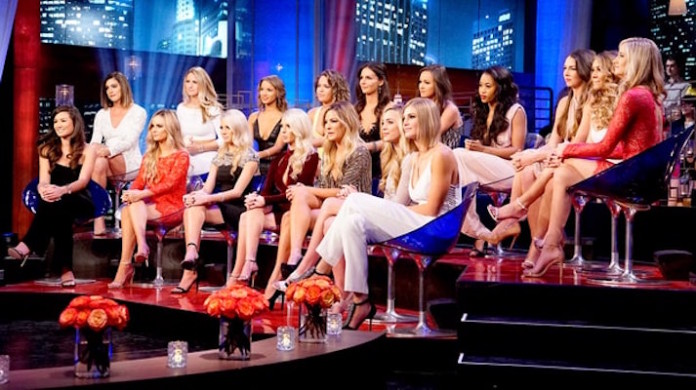 Last night we all (most likely) drunkenly sat in front of our TV’s eagerly watching for some shit to go down on The Bachelor: The Women Tell All special. It may have been just me, but with all the shade being thrown I was waiting for some fists to be thrown as well…or at least that damn chicken.* I’ve been saying this for a while, but I seriously think ABC should consider hiring some bouncers like the ones on The Jerry Springer Show and let the girls settle their issues like (wo)MEN…you know, for science.

*No animals were harmed during the making of this article.

Just to make sure we all remember what happened last week on The Bachelor: I love you, you love me, Ben cuts down to two from three. Basically. Now that we’re all caught up, let’s look back on some of the more interesting moments that happened, and our immediate thoughts that came along while the drama pursued:

1. These girls should have name tags.

Who is she? Oh, the chicken lady.

WAIT! Where is that girl Samantha who Ben described as ‘sour’ smelling?

Have they seen Liam Hemsworth?? Step aside Miley.

3. I wonder if Lace is drunk right now?

Because I totes am.

My drinking game for tonight: Every time someone interrupts someone else I will drink a bathtub full of Moscato.

4. One of the twins looks like she wants to kill Leah…and Olivia.

Emily, is that you?

5. I hope they show a montage of Olivia’s wide ass mouth.

If not, here you go. You’re welcome.

6. They should have a wrestling match where it’s Emily vs. Olivia.

And fight to the death.

When is this b*tch going to realize that nothing on this show is private.

…and totally destroys Jubilee with Jami.

Where was this drama during the show?!

And how does she have so much to say being as she was only on this show for two episodes.

10. Jubilee is thrown under the bus…

And I’m totally okay with the events currently unfolding.

11. The Russian has said more during the first 15 minutes of this special than the entire time she was on the show.

12. Why does everything have to be a racial issue?!

13. Why is Jubilee even in the hot seat right now?

Her seat back with the other girls was hotter than this.

14. When girls who no one remembers talk…

This show is basically a bunch of no-names attacking a bunch of somewhat no-names.

15. The dude with the Lace tattoo should make a career in stalking arts.

Second year in a row that Chris Harrison invites the most unstable contestants to Bachelor In Paradise.

16. The great hole-y Olivia. It’s amazing that we didn’t know how crazy she really was until Episode 3. A lesson to everyone 6 months into a relationship.

ASK HER HOW SHE GOT OFF THE ISLAND!

17. The twins talking over each other yet saying the EXACT SAME THING is everything.

18. Olivia’s game plan right now is to bring up any hot topic like bullying.

Wouldn’t be surprised if she tried saying she grew up as a brace-face paraplegic living in the projects.

19. I can’t tell if the Russian has an accent, can’t speak English, or both.

20. Olivia should show us her toes. You know, for educational purposes.

22. When you realize you’d rather watch the chicken take a nap than watch Caila in the hot seat. So, I’m changing the channel, if anything groundbreaking happens, let me know.

23. Caila is looking a little chubby in the face… She probs got real close with Ben & Jerry’s after the breakup.

I feel like she’s so unstable right now, like she could fall in love with Chris during this interview.

25. Chris Harrison: “What was just going through your head?”

Me: “I’d really like to run some texturizing cream through her curls.”

26. Caila wants someone to look at her the way ben looks at two women, one of whom he has dumped in a special everyone will watch on TV next week.

29. Can we have the chicken weigh in on some of this. I feel like she has important things to say. Wait, did the chicken date ben too? I vaguely remember her ruffling some feathers the first night. Get it? Yeah, you get it.

30. Leah better shut her damn face. She still makes me want to punch a small child.

31. Everyone is saying “smart things”…so, why is Olivia not happy? Her mouth should be wide AF right now.

32. Why are these women going so easy on him?! He broke their hearts, and they’re still swooning. Nailed it.

34. Hardest question of the night…which twin was which? Glad they asked that because I had no idea until now.

35. This blooper reel gives me life.

36. At least Chris Harrison finally realizes that he says every season will be “the most dramatic season yet.”

As much as this season has sucked lately, it couldn’t be as bad as watching yourself get dumped on TV in front of a studio of people. That’s got to be its own circle of hell. I know we’re all impatiently waiting for drama to erupt next week where Ben quietly thinks to himself, “Maybe they never have to know about each other.” (Typical male logic right there.) ABC should seriously think about renaming The Women Tell All to He’s Just Not That Into You. They should also give all the women who don’t get a rose a cat to take home…

This is how I envision After The Final Rose episode:

Ben to Chris Harrison: “I love you.”

Ben to cameraman: “I love you.”

Ben to rando shrubbery: “I love you.”

Now I give up, I’m too tired, and too sober for this shit. See you beautiful humans next week!

Check back next week for the recap of After The Final Rose! The Bachelor airs Monday (8 p.m. ET) on ABC.