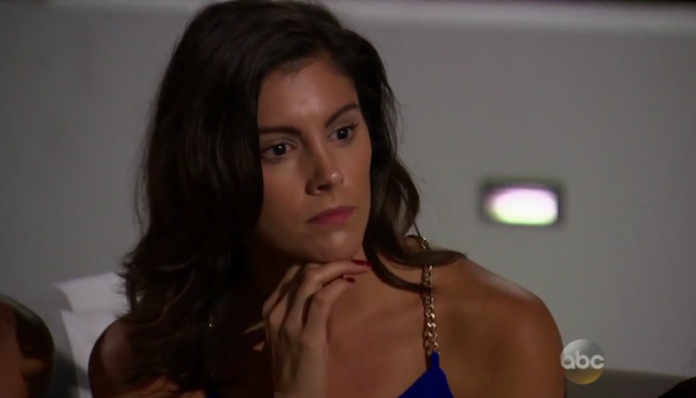 The second episode of The Bachelor, Season 20, started out with one of the twins calling Ben Higgins “the greatest Bachelor on the planet of history,” so that obviously guarantees us two great hours of television. As for which twin said it, I have absolutely no idea because nobody can tell them apart, probably not even Ben…hence why he continues to keep both of them around.

With two group dates, a one-on-one date, a hot tub, Kevin Hart and Ice Cube, a private concert with Amos Lee, an emotionally charged cocktail party, lots of open mouths, a sh*t ton of crazy eyes, and a handful of straight up b*tches, we had ourselves all the essential components of a classic Bachelor episode. Really the only thing we should have to go in-depth about is the “handful of straight up b*tches” so let’s not waste anymore time. Let’s count it down to the worst, most annoying b*tches on this show:

All I have to say is thank God she speaks Russian because I’m almost positive she has cursed out each one of these girls and we’re just sitting watching TV thinking she’s just doin’ her thang and speakin’ her language. We don’t know enough about her to hate her entirely, but just in case we find out later this season she’s a Russian spy or just there to f*ck things up, we can say we called it from the start.

Yes, we’re grouping them together because we can’t tell these dumb blondes apart…and don’t you dare judge me for saying that, they opened up that door real quick when on the group date at the Love Lab and one of these sisters said, “Don’t put the blonde on this date.” Not only was she offending herself, and her sister (who looks EXACTLY like her), but every other blonde on this season, and in real life. I also think it’s safe to say that Ben seems to be liking mostly blondes so far. Ben also mentioned he wants a wife who is smart, soooo you basically just lost. Do yourselves a favor and stop wasting everyone’s time, send yourselves home just like LB.

We aren’t exactly hating on her just yet, but we’re starting to get the sense that war vet, Jubilee, isn’t quite done with wars. This episode she is quoted saying, “I will not murder her, I will not murder Lace, but she might tastefully disappear.” We may not end up hating her, but she may end up being hated by every other contestant on this show. *Literally peeing myself from the anticipation of what war breaks out next week.* Remember ladies, Jubilee knows where you sleep at night, so if you end up crossing her, b*tch might just cut you.

One of the first things we heard from Lace tonight was, “Last night, I got a little too drunk.” Umm…a little too drunk? Okay, well let’s give her the benefit of the doubt and say that she was just a little drunk and the editors/producers had it out for her. But the very next time Lace shows up on our TV screens, she has a drink in her hand, she’s slurring her words already, and she’s pissed she didn’t get enough attention from Ben. We’re talking less than 5 minutes into the show here people. Then, she interrupts the other girls while they’re talking to him and three seconds later is complaining that she hasn’t spoken to him all night. Okay, Lace, well maybe if you stopped interrupting Ben every time he said anything to you then you’d feel like you got some alone time with him. (Let’s not even bring up the fact that Ben basically kissed everyone else except Lace, and it pretty much made my night). Then, when Olivia (who you’ll hear about in a quick second) gets the rose on the group date, Lace decides to pull her aside to complain about the fact that she hasn’t talked to Ben all night, saying that she “gets interrupted every time they’re talking.” Lace, you do the exact same thing. Get over yourself.

While we do enjoy the drama Lace brings to the table, and the excessive crying, someone needs to give this girl some tips on how to calm down. We all want Ben, Lace, so take a chill pill.

Let’s just start with this…close your f*cking mouth. We’re pretty sure we didn’t see Olivia’s mouth closed any time during the entire episode. After the first episode, we kind of liked Olivia, but we don’t remember her voice being this annoying, nor do we remember her being so transparent and fake. In the group date she was on, Ben smelled the girls in the Love Lab and she claimed that “I want Ben like real bad, and apparently my scent does too.” (I’m pretty sure that’s not how pheromones work, but whatever). Oh anddd she isn’t “worried” about the other girls because apparently her and Ben have a special connection…Olivia, it’s literally been a day. Then comes our favorite part, Ben gives her the group date rose, and she says during her one-on-one interview with the cameras, “Olivia Higgins…it’s mine. Just, come on, let’s end the show now.” We’re all for being in love with Ben, but this girl barely knows him! Someone give her one of Lace’s chill pills (or drinks).

Now that we’ve sufficiently blasted the girls we didn’t like, here are some memorable (and adorable) moments that we really did enjoy and make us look forward to the weeks of romance ahead.

First of all, can we just talk about how cute Caila was on her date with Ben? Add in Kevin Hart and Ice Cube and we think they’ve already had the best date in the history of The Bachelor. If you didn’t fall in love with Kevin Hart tonight, then get a new show to watch, because he was the true MVP of this episode. And let’s not even mention how adorable Caila and Ben dancing to Amos Lee was because it’s almost too cute to handle.

Amanda S. and Ben also shared a lovable moment, when they were talking about her daughters. Not only did they cuddle for a bit, but Ben also made rose barrettes with Amanda for her two daughters because they were ‘already involved’ in their relationship. It was definitely an ‘awwww’ moment.

Although Ben managed to narrow down his selection to 17 women, maybe he should take Kevin Hart’s advice by feeling these girls back and kicking any ones with bumps off the show.

“One thing I’m not good with is women with bumps on their backs.” – Kevin Hart