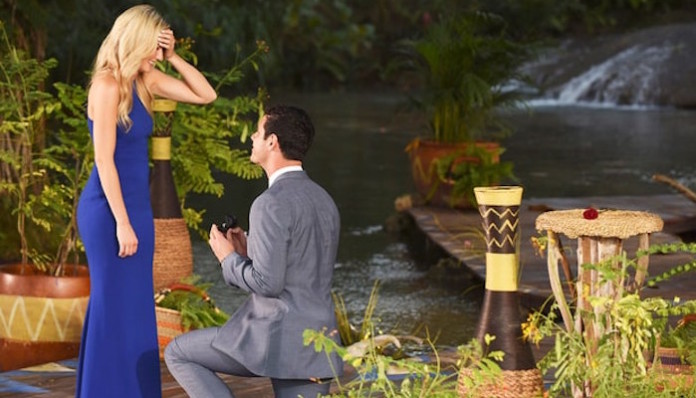 This season has been quite the ride that, I’m sure, most of us have considered jumping off of (preferably at high speeds). Yet, here we are. We’ve made it to the finale week, f*cking finally. Chris Harrison always promises the most dramatic season finale ever, and this time, he just might be right for once.

We end this season in Jamaica, where Ben spent every free moment hoping and praying for some clarity. He’s in love with two women and he has no idea how to choose. I say go old school and use the eeny, meeny, miny, moe method, but that’s just me. Ben’s fear at first was that he was unlovable, and now his problem is that he’s too lovable. La-di-f*cking-da. Ben: single people everywhere are collectively telling you to f*ck off.

Ben hopes that his parental units can share some wisdom, so he meets up with them. But after explaining that he is in fact in love with two women, all mama bear can seem to say is “wow.” Actually, mom, Amy, finds this situation “really disturbing.” If you’ve ever wondered what a proud mom looks like, trust me, it’s not her.

First up, Lauren comes to meet the rents where her and Ben both mention this meeting has been “a long time coming.” Has it? Ben explains their first date where Lauren flubbed by saying she wanted to meet his parents right off the bat. That was like 2 months ago, but sure, let’s all pretend like she’s been waiting years to meet the fam.

Ben’s dad pulls Lauren aside to talk. Lauren says, “Ben is seriously, like, one of the most incredible people I’ve ever met,” and Ben’s father simply says, “Thank you.” Guess papa bear is taking all the credit for this one, sorry Amy.

During Amy’s talk with Lauren, which seemed like more of an interrogation, mom seems more concerned on how Lauren can help Ben when he gets “intense,” if she gets wifed up. Is Lauren ready to talk him down off the ledge? That depends, Amy, did you put him on that ledge?!

Sitting outside, on more f*cking steps, Lauren tells Ben that “getting married, for me, is like, a big commitment.” But only for her, right? Because, you know, the rest of the population thinks getting married is about as big a commitment as deciding what pair of dirty pants they’re wearing today.

The next day, JoJo meets the parents, shaking. This b*tch is a nervous wreck. She quickly sits down and tells Ben’s parents that she’s happy to have met the “two people who have made such an incredible guy, one I’ve fallen completely in love with.” *gag* And the fact that she brings up how Ben is “hard on himself,” she begins speaking straight to Amy’s (dark) soul.

Ben gets too comfortable because he starts telling his rents about their helicopter ride in Vegas and how they didn’t exactly see much of the Hoover Dam. Get it? Because they were making out. Mom puts it as, they had “too much cuddle time.” And just like that we all know why Ben was so good at talking to those elementary school kids about sex: because that’s how his parents STILL talking to him about the good ol’ birds and the bees.

JoJo ends her nerve-racking day with Benji, explaining that there’s zero doubt in her mind, which only makes matters worse for Ben. Ben returns to his parents, where all they offer up is informing him that no matter which woman he chooses, she’ll say ‘yes’ to his proposal. Suddenly, I want plot twist ending where he asks both women and we get a Sister Wives–Bachelor spin-off.

The next day, Ben gets to go on his very last date with Lauren. She can tell something’s up, but as she puts it, Ben is “thinking about something, and I don’t really know what.” Well my darling dear, he’s definitely not thinking about those baby sea turtles.

During the evening part of their date, Ben tells Lauren, “No matter what happens, you’ve made me a better person, made this worth it.” Uhm…Ben? I know you’ve never broken up with someone you love, but this is a really great f*cking start. He follows that up by thanking her for allowing him to get to know her AND allowing him to fall in love with her, which apparently don’t already coincide. Now all my past relationship failures make total sense. This takes Lauren from confident AF to 100% freaking the f*ck out. Naturally.

The next morning comes around, where Ben admits that JoJo finally caught up to Lauren. JoJo is the tortoise, and Lauren is the hare…got it.

A big ol’ hug happens and JoJo asks, “Can you feel my heart again?” which I’ll ignore, pretending like it never happened. They finally arrive at their destination, where JoJo is introduced to “the blue hole.” JoJo’s first realization? “The water is so blue.” Turns out, you can judge a waterfall by its name.

Later that evening Ben explains that “what I’m feeling for you is deeper than anything I’ve ever felt,” but when she asks about his struggle, he explains, “I don’t have one.” Ben explains that he’s looked long and hard at both relationships and can’t seem to find something that would make his decision easier.

JoJo takes him into the bathroom, she shuts the door from the cameras, and quietly whispers to him that she needs “something” from him. Ben, clearly not getting the whisper memo, yells that he loves her, which leads us to this:

Leaving JoJo that night, Ben’s a lost man. “Emotionally, I’m lost…In terms of what to do, I’m lost.” He almost just said, “Physically, I’m lost,” so can someone please show the poor man to his room?! Ben: if Olivia can make it off that island, you can get through this.

Finally, it’s decision time, and leave it up to Neil Lane to show Ben the way. As soon as Neil asks, “Do you know who it is?” Ben realizes! Looking at the ring, Ben discovers which woman deserves the bling.

After the women both board their individual helicopters, the first one to see Ben is…JoJo. Thankfully, Chris Harrison is there – flown all the way to Jamaica to walk the women 10 feet – literally to escort her 1/16th of the way to her heartbreak.

JoJo tells Ben that all of this could be worth it. She knows love isn’t supposed to be easy, but rather, it’s supposed to be worth it, and “To me, this is worth it; you are worth it.” Twisting the knife in Ben’s heart, she tells him, “I love you with all my heart, and I trust you, and I’m never gonna run from this no matter how hard it gets.” (Well, that’s not completely true. Prepare to escorted off the island, JoJo.)

It’s finally Ben’s turn to speak, and although we were all hoping he would suddenly become an elegant speaker he leaves JoJo with this; as he tells her that even though he found love with her, “I found it with somebody else more.”

Returning the knife-twisting favor, he tells JoJo that even today he doesn’t question that he loves her, but JoJo’s too blindsided/confused to understand. She asks where it went wrong, but all he can say is that it never did. As Ben walks her out, he doesn’t come up with anything better to say other than that he fell in love with two people and had to pick. Hugging her goodbye, Ben puts JoJo in what should be a hearse, fully knowing that she got the “raw end of this deal.”

Ben explains to the cameras that he’s about to propose to Lauren and he was confused about that because of JoJo, “because that’s how much I love her.”

As for JoJo, she’s left feeling blindsided, but even in her heartbreak, she isn’t mad at Ben nor can she hate him. She simply wants to meet somebody who will love her back. Meanwhile, her brothers are calling their hitman. Just kidding, they do their own dirty work.

Ben admits that he could’ve married JoJo and been very happy if it weren’t for Lauren, whom he loves with all his heart. “It’s a love that I can’t lose,” he says as he calls Lauren’s father to ask for his daughter’s hand in marriage. And Dave is into it, so much so that he tells Ben to have a “great night.” Yeah…enjoy all that “cuddle time,” Ben.

Side note: Ben’s fist pump and “woo” might be the cutest thing I’ve ever seen. He was like Tiger Woods but without the ego or sex addiction.

Now for the moment we’ve all been waiting for: Lauren arrives and nearly ruins everything with her horrible walk, but by the time she gets to Ben, she tells him that their first kiss “was the last first kiss that I ever wanted to have.” Ben’s her person and she looooves him.

As for Ben, he tells her that he came into this feeling unlovable. And with this being an experience full of goodbyes, he’s realized, “Lauren, I never wanna say goodbye to you. I want to wake up every morning and kiss you on the face. I want to go to bed at night and know that in the morning I’m gonna wake up to the most beautiful woman I’ve ever laid eyes on. My desire from here on out is live for you, commit to you, love you, hold you, kiss you a lot. Lauren, I want to spend the rest of my life with you.” Did he mention that he wants to kiss her? Okay, cool.

Getting down on one knee, Ben asks Lauren to marry him, and she, of course, says ‘yes’. And in what might be the second-cutest moment of this season, Ben stops kissing her only long enough to say, “Lauren, you’re my person.” Then there’s a whole lot of “I’m lucky,” “No I’M lucky,” before Lauren accepts the final rose and Ben carries her off to their happily ever after.

Lauren B and Ben Higgins are now engaged to married, “very soon.” Now, the lucky lady will be followed around for the next year or so – even well after her relationship with Benny boo comes to an end.

Can’t wait to watch JoJo’s family intervene in her up and coming love life shit show next season of The Bachelorette airing this May (sorry Caila but JoJo is the better choice)! Will Chad bro Chad make an appearance? Way to be ABC, nothing says finding true love than watching it fail, crash, then burn once on national TV like making them do it all over again just for shits and giggles. Am I right?

8 Simple Things All Guys Need To Understand About Flirting