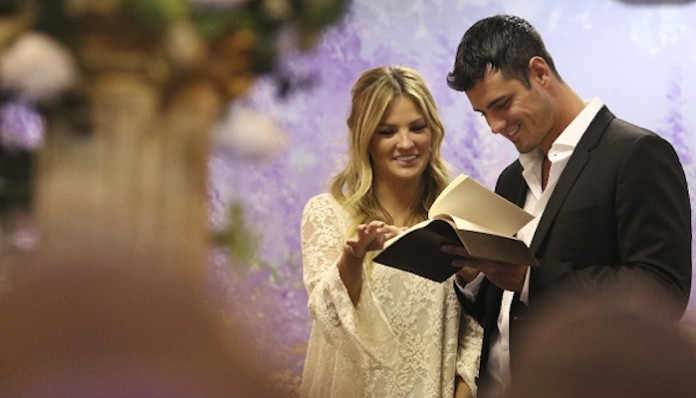 It’s that beautiful time of the week, where we all sit around our TVs drinking a couple bottles of wine, watching a house full of women fight over the same man and call it love. Right. We all know this show has had more bad luck with successful marriages than Elizabeth Taylor. So, what better way to show these women you’re “serious about marriage” than to take them all to Las Vegas, “marriage capital of the U.S.” aka why our divorce rate is 50%. Great thinking production team, you’re really nailing things this season.

We start the fourth episode with the ladies in the mansion discussing their political views, foreign affairs, and their five year plan on how they plan on changing the world. JK. Instead, their captivating revelations included statements like, “There are not a lot of us.” So, Lauren H. clearly paid attention in elementary school math. Good to know.

Since this show has been a trainwreck from the very first episode, worry no more, because nothing has changed. Girls are still f*cking crazy, giving the rest of us women a bad rep, and Olivia is still going full-steam with her batsh*t crazy self. So, let’s not waste anymore time, it’s time to give these 11 ladies a much-needed reality check.

I’m rooting for you girl, but you’re sort of an idiot… When you’re opened up to Ben, you mentioned your most recent ex-boyfriend, and how you “weren’t the only one in his life.” We get it, he cheated, and now you’re f*cked up from it. Get over it. Oh, and honey, here’s a little secret, you’re not the only one in Ben’s life either. But hey, we all heard Ben say “When I’m in those moments with you, nothing else matters,” so we’ll most likely be seeing you in the final four.

I’m starting to think you’ll also make it to the final four as well, mainly because Ben called you a “sex panther”. So, kudos to you. You are no longer the shy Caila I saw in the first few episodes and I feel like a proud mama bear. You got up on that stage and belly danced the sh*t out of it. You jumped in his arms during the premiere and now you’re practically sitting in his lap. You’re grabbing him and just kissing the living sh*t out of him. You go girl. I bet money that you’ll become one of the girls to beat in the final four. Oh, and I’m no longer calling you Calliou, so yay for me too.

You are the last twin standing, must feel good right?… Until the Women Tell All where Haley sees how fast you threw her under the f*cking bus. I have a good feeling that’ll start some insane twin drama. Nothing says love like having your boyfriend reject your twin sister in front of your mom in your own home, and then leaves her there as you two make out during the limo ride home. For your sake Emily, I really hope you don’t make it to the hometown date, because that would be awkward as f*ck. Good news though, I don’t have to try to tell you two apart anymore, so at least we have that.

How did it feel having Ben give you a wedding dress to wear for your one-on-one date and have him get down on one knee in front of you, just to ask if you would stand next to him while he marries other couples?… Then later that night Ben asks about you being a virgin and “Has it been hard for you?”, even though we all know he really wants to know if you’ve done anything other than sex. Most likely, because he didn’t get a clear answer from you on that, he probably won’t waste an overnight date on you, so he’ll send you home before then. But just so you know, Jubilee has no faith in you since after you left on your date in the wedding dress she was quoted saying, “If she hasn’t lost it in 26 years, I doubt it’ll happen in 6 hours.” Shade has been thrown, hard.

The only thing I remember you saying is “I don’t think any of the girls have any talents here” which you would be completely correct. Listen, you need to step your game up if you want a rose next week. Do something that will make everyone watching this stupid show remember you. And if I’m being honest here, if no one else remembers who you are, what makes you think Ben will?

So, you can count and your “talent” is dressing up as a chicken and singing; well aren’t you a catch. Your concern on the group date, about whether or not nipple tassels were involved, is actually quite unsettling to me… Also, the fact that I was in the other room when I heard you kissing “Lil Ben”, I immediately thought, “This b*tch kissed his d*ck, didn’t she?” and I’m not sure if I was relieved or disappointed to find out it was only a ventriloquist dummy made to look like Ben. Not sure how I feel about you still.

I have a feeling that not only will you make it to the final four, but you’ll leave this show with a pretty little diamond on your left hand. Ben is not only super touchy-feely with you, but he also told you to “never question us.” Which, let’s be real here, was his way of making you wifey real quick. You probably have nothing to worry about because Ben wanted to give the group date rose to someone who feels strongly about and confident in what they have, and you my darling, got it. Lauren Bushnell you will soon be Lauren Higgins, and I’m perfectly okay with that.

What is up your sleeve little girl? To my surprise, and probably everyone else’s, you were not an asshole flying off the handle for a change. Only leads me to believe you’re either up to something, or this is the calm before the desert storm (see what I did there? – cause she was in the military). I know every guy watching this show blame the fact that you were a little cray cray before because you were probably on your period, were they right?

You need to stand out a little more too, sweetheart, because right now, you and Jennifer are the two most unknown humans on this show. I think I know more about the cameraman than I do you two. You seem nice, and you’re really pretty, so what the f*ck are you doing standing in the shadows? You got through this rose ceremony by the skin of your teeth, because God knows that clown costume did nothing for you. Show us, and Ben, who you are already, you don’t have much time left!

Can you adopt me already? I seriously love you so much. I hope you make it to the final four and we get to see Benny boy with your two princesses. And I am so excited knowing you are the one to call Olivia out to Ben. We are all aware of the curse on this show, where usually the person who tattle tales on someone almost always gets sent home that night, but I’m crossing my fingers and not-so-ugly toes that you are the reason Olivia gets sent packing.

You need to f*cking stop with this “best for last” sh*t. I didn’t save the best for last, I saved you for last because you get a damn novel. Stop this bullsh*t act of yours, it’s so unbecoming. You are 23, so f*cking act like it. Seeing him with other women clearly does bother you, stop just shut up and stop trying to act all tough and sh*t. Whenever you see him give anyone else in the house attention your face looks as if your other brother destroyed your Lego town and mansion you spent all day building and told you to clean it all up while walking away laughing. (True story, this happened to me.) I also think it’s super hilarious when you see him with someone else and that is literally the only time your mouth is closed all the way, almost makes you look semi-normal. Oh, and you make me want to hit you in the face with a metal chair, especially when you were spying on JoJo and Ben kissing and said “I think he’s my husband, and now I feel like I’ve been cheated on…” Go cry to JoJo about it, apparently you two have something in common now. I also call bullsh*t to you having a panic attack after the talent show, which might I add, you lacked the “talent” part. Popping out of a cake isn’t talent, that’s what strippers do. You weren’t having a panic attack, you’re just a little b*tch. And you left literally all your clothes and sh*t all over the floor. This isn’t your house Olivia, clean up your f*cking mess and maybe figure your pathetic life out. Honestly, what do you have going for you Olivia? You have cankles, weird calves, ugly toes (which the producers don’t even want to show us them), bad breath, a wide ass mouth, a sh*tty personality, you’re ugly as f*ck without makeup on, you’re a spoiled brat who freaks the f*ck out when you don’t get your way, you have an I’m-better-than-everyone attitude, and clearly no talent whatsoever. Just go home, you’re an embarrassment, and I hope you never get your job back. Ben isn’t ever sending you messages, ever. So, just stop before one of these girls burns you in your sleep with a curling iron. Also, you made me curse 14 times in one paragraph. B*tch. 15.

Now that we got that out-of-the-way, let’s discuss Benny boo. Is it just me or does it seem like Ben’s ego skyrocketed this episode? Signs of him turning into a f*ckboy are becoming evident. He’s kissing all these b*tches, let’s just hope he doesn’t turn into a Juan Pablo, and think “it’s okay.”

If you think this episode was one for the books, wait until next week where Olivia turns the house against her by insulted my main girl Amanda by saying “I feel like this is an episode of Teen Mom”. Olivia, she is a mom, do you honestly think she’s going to let you say that sh*t and get away with it? Hell to the no. Previews show Amanda sitting Ben down telling him what was said and later he is seen asking to talk to Olivia. B*tch needs to understand, never mess with the moms. You bet your ugly toes your ass is getting sent home, Olivia. We have a week to recover from this week’s episode, so until next week on the “most dramatic season ever”.