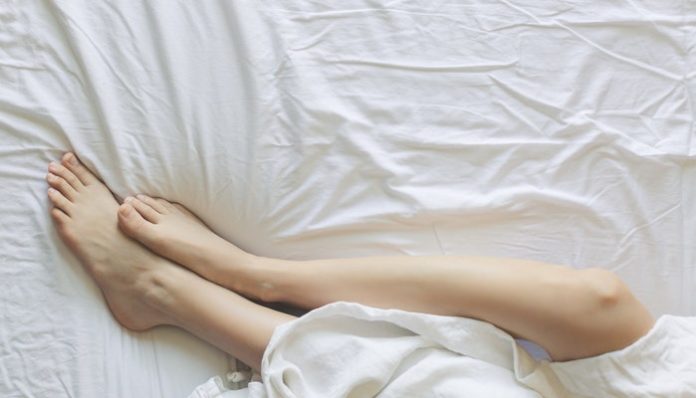 Ah, vagina… My entire body is washed with a wave of the warm-and-fuzzies just writing the word.

For me, going down on a woman I love often feels like sitting down to a steak dinner after 40 days in the desert. There’s just something about the idea that sets me on fire, which has led me to talk with some experts and research various techniques over the years.

Want to learn how to give her good oral sex? Here is the low down on going down.

For best results, you’ll want to get her totally relaxed, comfortable, and in her body. Make sure she can lie back and let every muscle go.

Set her up with a few pillows if she wants to be propped up for comfort, or get a better view if that’s what turns her on. If she’s a squirter, put down a sex blanket so that she can really let go without worrying about leaving a wet spot on the sheets.

Lightly massage, touch, and kiss her whole body. Tell her what parts you find sexy. Lavish her with genuine praise. Let your excitement show.

Just as important as making sure she is physically comfortable is settling in and ensuring that you are physically comfortable. Position yourself so that you’ll avoid any neck, hand, or forearm cramping for as long as possible. I mean it: get comfy. Settle in with the mindset of “I’m gonna be here all night” and she will respond to your level of relaxation and relishing.

Some guys will jump head first off the high dive into her lap and start lapping her up like their lives depended on it. There’s a time and a place for that, but her experience will be way more pleasurable if you start out very, very slow.

This leaves room for you to build the intensity and experience, much like a musician. A piece of music rarely starts with the crescendo. Otherwise, there would be no payoff. All my favorite songs build slowly, rising and falling, adding more elements along the way until they finally explode in flourishing sonic orgasm.

The simplest, most on-point metaphor for this was given to me by an instructor of Tibetan Tantra. Imagine that your sexual arousal is a pot full of water. Men have a tiny saucepan, while women have giant stockpots. While a guy can happily hit a rolling boil in no time at all, a woman needs more time to heat up. Again, there are times where she’ll be down to ravenously jump right into it with zero foreplay, but this is a solid rule of thumb for a reason.

By starting slow and switching up the intensity from high to low, and low to high, you create sexual tension, which eventually spills over in the form of orgasm(s).

3. Pay attention to her clitoris.

The clitoris is a gateway to some of the most insane levels of peak pleasure a woman could ever experience. It has around 8,000 nerve endings, which is more than twice what the penis has.

Women can sustain orgasms of length and intensity that men will simply never know (caveat: men can also become multi-orgasmic with a little bit of effort, but women still get the sweeter end of the stick in terms of orgasmic/peak arousal). So if you’re ignoring it, or are simply uninformed, you’re missing out on a massive treasure chest of sexual experience.

Like most things in life, there’s more to the clitoris than meets the eye. It’s more like an iceberg than a button. The little pear-shaped bulb that pops out over top of the vaginal opening is actually just the tip of it. It’s actually more of a wishbone shape, with two shafts that run down either side between her opening and hip creases. Rhythmically massaging this area before or while using your tongue is a great way to stimulate blood flow and add to the fullness of sensation.

That said, the tip of the clitoris is definitely a magic sweet spot. It’s slightly cloaked by a protective hood, so when you’re ready to really turn it up (generally at least 5-10 minutes into it), you’ll want to pull that back. There are two most comfortable ways to do this:

When you gently pull up and slightly outward, you’ll get maximum nerve exposure on the clit and start driving her wild.

There are other key internal erogenous zones, but a decent percentage of women can’t orgasm without some form of clitoral stimulation taking place. Give the little cutie the attention, love, and respect it deserves.

Warm her up by keeping your touch gentle and slow-motion. Kiss, lick and tease her thighs and the sides of her vagina. Softly make out with it exactly like you would her mouth. Stop and use just your fingers for a little bit. Trace slow circles on her clitoris, then switch to rapid lateral micro-strokes, as if you were trying to gently rub a small stain out of your t-shirt. Using your middle and ring finger together works best here.

When you go back to using your tongue, add a finger or two to stroke her G-spot on the first few inches of the upper inside wall of her vagina. Try matching pace and pressure with your fingers and tongue and then contrasting slow, firm strokes with your fingers and rapid flicks of the tongue.

And when I say firm strokes, I mean firm. When you’re more than a few minutes into stimulating her, it’s nearly impossible to go too hard with a few fingers. Think about it: babies come out of there. It can handle a lot of stress. Some of the best orgasms I’ve given women were when I was giving it every ounce of strength I had.

Once you build intensity, slow way back down to how you started out and then quickly build back up. Playing with differences in speed and pressure will give her stronger (and often multiple) orgasms.

You can increase the oral intensity once in a while by flexing your tongue and leaning into her while you lick. When you’re doing this in the heat of the moment, you can try pushing into her clit with a firm tongue and shaking your head vigorously from side to side, kind of like a paint shaker. Doing this for too long can rattle your brain a little bit, but it’s often very effective in short bursts.

Also, try pulling the whole clitoris into your mouth and slowly sucking on it like you’re pulling a milkshake through a straw. Some women love this and some don’t. You’ll just have to throw it in once in a while to test the waters. And always avoid using your teeth at all costs.

There are no hard-and-fast rules here for structure and order. You just have a toolbox that you can pull and switch from whenever you choose. If you use your intuition, communicate with her about what she likes and wants, and LISTEN to her response as you’re going down on her, you can’t go wrong. Notice what makes her breathe harder and deeper.

Just remember, the slower you build, the more intense her orgasms will be. And just like it is for men, the more the person giving oral is truly into it, the hotter it is and the faster the recipient will likely hit climax. So if you’re going to go down, simultaneously act like you’ve got all the time in the world, and unleash yourself and go all the way.

Stamina is the biggest key to great oral sex. One of the biggest secrets to being able to stick with it is to totally relax your jaw. The tendency most men have while licking is to clench up, which is what causes most guys to quickly burn out and not make it to the payoff.

Let it hang completely loose and flick your tongue independently of any jaw tension. If you cramp up easily, you may have a lot of stored jaw tension that you need to release.

6. Attempt to give her multiple orgasms.

Most guys can’t handle, nor do they want, any stimulation after they’ve had an orgasm. But for women, it’s usually quite different. Sometimes maintaining stimulation after orgasm can cause you to cruise right into another one. Or, you might be able to dial back stimulation for a few seconds and then ramp it right back up again to bring her to climax. I find this works relatively often.

Just don’t be too cautious about it. I usually find that if I push back a bit against her natural bodily reflexes to close her legs and squirm away, she’ll have more and more orgasms.

And don’t worry, if it’s way too intense, she’ll stop you. Again, listening and paying attention to her response throughout is key. But as a rule of thumb: it’s better to lean slightly over the edge of too much stimulation into the land of potentially-another-orgasm than it is to delicately handle her like a fragile soufflé and give her an underwhelming/frustrating almost-orgasm.

Giving good oral is a knack. Like any other skill, all you can do to develop it is practice and repetition. It takes some time to be able to tune into a woman and intuitively read her arousal blueprint. But I promise it’s not as hard and mysterious as everyone makes it out to be. Keep calm and lick on my friends.