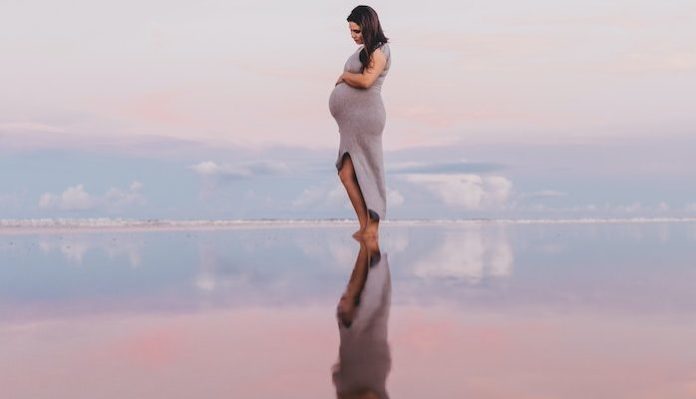 I waddled across stage to receive my college diploma, knowing my leather-bound degree would serve as a paperweight in the months and years to come.

I was one of hundreds of graduates, ready to take their next step in life.

For most that meant transforming internships into jobs or leaving to attend grad school, perhaps doing some world traveling before settling into their new adult lives.

Me, however? I was having a baby.

Some deep, primal part of me had wanted to become a mother for some time.

A friend of mine had confided in me that she, too, had these feelings from time to time.

I imagine quite a few young women have maternal urges every once in a while when they’re in those prime reproductive years.

Most of them, however, don’t act on those ill-advised urges and completely rearrange their lives to become young moms.

But that’s exactly what I did.

The truth was, there was no rearranging required. Actually, having a baby seemed easier than facing the real world and trying to figure out what to do with my life after college.

I’d spent hours meeting with professors and advisors over my junior and senior years, trying desperately to get someone to tell me what exactly you’re supposed to do with a liberal arts degree in the real world.

Grad school came up a lot but I knew that wasn’t a viable option for me.

I would have to move away from my husband to attend an MFA program, not to mention put us into crippling debt and likely have the same questionable future when it was over.

So, one impulsive night I took the plunge and my husband and I started trying to have a baby.

Let that sink in: A baby. On purpose. In college.

Being pregnant my final semester of college was no cakewalk but I felt a sense of perverse relief every time someone asked me what I was doing after graduation and I was able to nod towards my protruding belly.

I didn’t need to have a career path mapped out or my resume spruced up. I had a baby on the way; I’d figure the rest out later.

Once my son was born, however, I found having a baby wasn’t exactly a pause button on adulthood.

My transition to motherhood was much harder than I’d anticipated.

I struggled with postpartum depression for the first year and a half of my son’s life, partly because I was so young and emotionally unprepared when I had him.

Going from an actively social college life and retail job to being a stay-at-home mom was a total shock to my system.

As for the real world? It came crashing down on me even harder now that I had a child. There were bigger bills to pay. There was more responsibility to shoulder.

Marriage got real hard, real fast. I knew motherhood would be difficult, I just didn’t realize how difficult. I prepared as best I could, but you can never really be prepared.

Though I had planned on putting my future on the back burner to figure out at a later date, I found myself restless much earlier than anticipated. Instead of muting my career goals for the future, having a baby only amplified my need to go after my dreams.

I suddenly had this tiny person looking up to me and I didn’t want to disappoint him.

Suddenly, I wanted more for myself than ever before.

I wanted to be an example of all he could accomplish.

I wanted to make him proud.

I wanted to show him that young motherhood didn’t limit me or define me in a negative light, even though (or perhaps especially because) it had been difficult.

I wanted him to know that he lit a fire inside of me that drove me to be better.

I didn’t want to hide anymore.

The years since his birth have been a tremendous time of growth for me, a far cry from the stagnant future I imagined for myself toward the end of my college career.

I’ve followed my passions wholeheartedly, and have taken leaps and bounds towards my dreams, where my younger self would have timidly taken steps.

Becoming a mom gave me focus and drive I might not have uncovered otherwise.

My plan to escape from the real world by diving into motherhood may have failed miserably, but I’m so glad it did.

8 Dating Mistakes That Are Making You Less Desirable