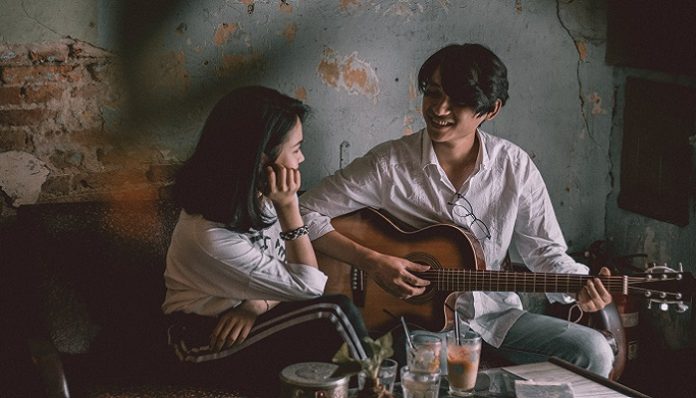 By musician, I don’t necessarily mean someone who makes a living playing music. It’s actually incredibly difficult to make a decent amount of money as a musician. What I mean is someone whose passion in life is playing music. It’s someone who turns to music to express themselves; it’s their true form of communication. Musicians are emotional, complex, deep, and passionate. They express themselves in a very vulnerable way through their music. It doesn’t matter if they sing, play an instrument, song-write, or all three. Music is their way of connecting with the world.

It’s difficult dating a musician because, most of the time, you’re not going to be able to understand the unexplainable passion they have for music. It’s not just a hobby for them; it’s a way of life. There are certain things you need to know if you find yourself dating a musician.

1. If they’re upset, it’s best to let them play their music before trying to talk to them.

Musicians have A LOT of feelings. There are going to be times when they don’t want to be around you because they have too many feelings. When they play their music it allows them to release their feelings. It’s best to just wait it out and let them play their music to cool down.

2. They think of their instrument as their child.

A musician’s instrument is one of their most valuable possessions. You shouldn’t try touching or playing it without their permission (and most of the time they won’t even give you that). They are also going to spend a lot of money on their instrument and related equipment. Don’t question them about these spending habits; they’ll only get offended.

3. One of the most frustrating things for them is when they have ‘writer’s block’.

You thought this was only applicable to writers? Think again. If a musician can’t put their feelings onto paper, it means they’re unable to get all those feelings out. When a musician is having trouble composing or doesn’t like anything they’re coming up with, watch out. They’re not going to be in a good mood.

4. Don’t give your opinion on their original music unless asked.

A musician’s original music is like a portal into their mind. They are generally pouring all their heartfelt emotions into their music, leaving them vulnerable and emotional. Most of the times they’re not writing this music for anyone else. It’s hurtful to have work that is so personal criticized. And when they do ask for their opinion, you should feel honored. It means they’re genuinely trying to improve their music and value what you have to say.

5. Concerts are where musicians feel most alive and inspired.

For musicians, concerts are like art galleries. It’s where they go to see a fellow musician express their art forms. Musicians don’t want to go to a concert because it’s a cute date-night idea. They go to find inspiration and to appreciate the music of someone else who understands music like they do.

6. Don’t tell them they will never be as good as another musician.

Musicians know that they will probably never be as good as legendary music icons. It’s not about being the best; it’s about playing their music and expressing themselves. If your significant other is a musician, don’t tell them they’ll never achieve what other great musicians have. Not only is this incredibly mean, but it shows that you don’t understand what music means to them.

You’d be surprised how many people have asked me to write a song for them. If I’m being forced under obligation to write you a song chances are it won’t have a very personal meaning. With the exception of maybe a few musicians, it’s difficult to produce a great song on demand. If you really want us to make a worthwhile song about you, wait until we voluntarily do it.

8. Be prepared that there may be songs written about you.

Romantic relationships and heartbreak are almost always the inspiration behind a musician’s songs. While we may write you a really touching song, we can just as easily write a really nasty song. Like I have said, original music is a reflection of the musician’s feelings. If I don’t have positive feelings towards you then the song I write might not be that nice either.

9. If they’re inspired to write something, anything else they may be doing will stop.

It’s true that creativity comes in random bursts. When they get inspired to write something, nothing else will matter until they put those thoughts to a page. It doesn’t matter if they’re going to be late, missing a TV show, or something is burning on the stove; their music comes first.

10. You’re probably not going to get as much sleep as you’re used to.

This isn’t as dirty as it sounds. Musicians are known for practicing at all hours of the day or night. If they’re inspired, like I already said, then nothing else matters. It’s a good idea to invest in some earplugs and be ready to apologize to the neighbors.

It is definitely not always easy to date a musician. They are passionate, emotionally-driven and generally put their music before everything. With that being said, there are obviously so many benefits that come with dating a musician. They are artistic, able to express their emotions, and can make you feel like the only person in the world when they write that first song for you. Musicians may be emotional and complicated at times, but we are well worth it.