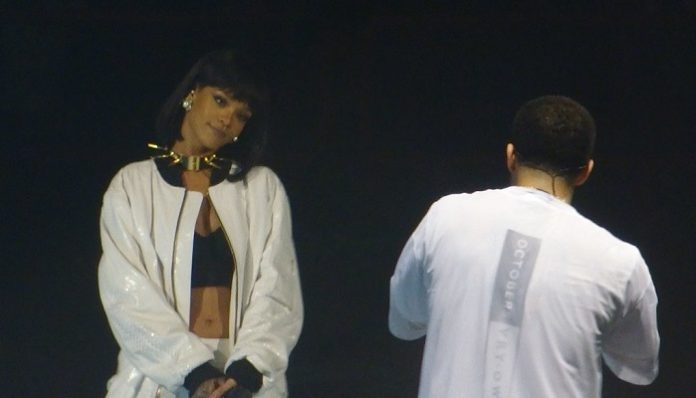 Ever since Britney and Justin split, the entertainment industry has been severely lacking a power couple for us to project all our hopes and dreams onto. Selena and Bieber tried, but we could never really take them seriously. Taylor and Calvin had a good run but of course, that blew up in a pile of suspicious flames. Luckily for us, though, Drake and Rihanna have swooped in to save us from ourselves and have filled the void in our cold, dead hearts.

Let’s be honest: We have been waiting for this for a long time. These two have been playing cat and mouse with each other (and with our hearts) for almost 7 years. We knew from the disaster that is Chris Brown that Rihanna had a penchant for the bad boys and Drake was perhaps a bit too nice for her at the time. I mean, this was her Good Girl Gone Bad era. But thank god, she seems to have gotten over that phase and has realized that nice guys finish first and deserve love too!

Here are 5 times Drake and Rihanna made us believe in love again:

A night of bowling begins the obsession

In 2009, after Rihanna first kicked Chris Brown to the curb, she and Drake hung out at Lucky Strike in New York City. We have no doubt the sexual tension was out of control, how could it not be after a hot and sweaty night of 10-pin bowling? Drake even alluded to the meeting in the lyrics for “Fireworks.” “I can tell it wasn’t love, I just thought you’d f*ck with me / Who coulda predicted Lucky Strike would have you stuck with me.” They should totally join a league.

Drake and Rihanna have continuously intertwined their careers together through countless duets, and it’s really hard to play favorites. “What’s My Name” was our first glimpse at the unstoppable chemistry the two have, and perhaps the most unforgettable. We can’t be the only one who, after watching them perform, screamed, “What do you mean they’re not together!?” With “Take Care” we got a real in-depth look at the struggle the two were going through together. They never seemed to be on the same page at the right time. And finally, we were gifted with the hot as shit video for “Work” this year. The entire continent needed a cold shower after watching that one.

That time Drake and Chris Brown fought over her

Now, listen. I’m a feminist and I fully believe a woman is not an object that can be fought over. That being said… It’s kind of amazing that this powerful woman can reduce these men to children in a sandbox. It’s also a little sexy to see Drake so hot and bothered over her. And let’s be real, Drake is totally the good guy in this battle and we’ll fight in his corner any day of the week.

The only reason the VMAs were worth watching this year was because we finally got what we have waited for this for 7 years. Drake declared his love for Rihanna in front of the entire world and made every girl immediately hate their boyfriend for not being as romantic as Drake. Did we think there was a small chance he was going to propose? Sure. The suit was overkill and he looked way too nervous. But we’ll totally settle for grand declarations of love, too.

Not only are these two out and about in public, they’ve also taken their relationship to the next step. No, they’re not engaged but they do have matching shark tattoos. Stupid? Yes. Romantic? Obviously. But really, it’s mostly stupid. Don’t ever get matching tattoos with a significant other, kids. That shit is forever.

Let us all pray that these two have finally come to their senses and are in this for the long haul, because I really don’t know if society could handle a breakup between these two. 2016 has sucked in almost every way possible and we need a little love in this world to make us feel better.

By the way, do these two have an official name yet? Drihanna? Rake? Oh god, please don’t call them Rake.

What 15 Straight Men Had To Say About Male Lingerie