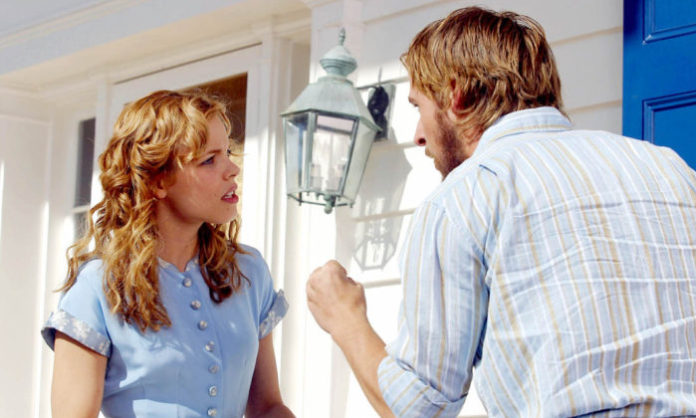 Remember that part in the Sex and the City movie when Miranda and Carrie are in the back of a taxi, and Miranda is trying to get Carrie to forgive her for screwing up her whole wedding and entire life, and then Carrie says Miranda should forgive Steve for cheating on her while they’re at it, and then Carrie says, “It’s forgiveness,” and the taxi driver nods in understanding? Well, that has no relevance to what I’m about to say next.

There are things people do in relationships that can never be forgiven. You might think I’m referring to cheating or something along those lines, but the issue goes much deeper than that. There are things far more awful that a woman can never, EVER forgive her man for doing.

1. Texting/sexting other girls behind your back and denying it after you find out.

This is walking the very thin line of cheating and whether or not he ever acts on said texts/sexts, it is still very inappropriate to feel the need to talk to other women while in a “committed” relationship.

If your man ever makes a comment insinuating that your work or major in college is irrelevant, you cannot forgive that. He will forever see you as someone incapable of taking care of herself, and he definitely won’t be someone you can talk to about your stresses or even passions.

3. Having blamed your presence in his life for his shortcomings.

He is a grown man and no one is responsible for his shortcomings but himself. If he blames you once, he is the type who will always be looking for someone to blame rather than accept the failure himself.

4. Being rude or disrespectful to your family/friends.

He obviously hasn’t learned one of the most important lessons in life which is to learn how to get along with the family. If he doesn’t learn that, you’ll feel tension in your life forever.

5. Sharing explicit photos of you or another woman for that matter.

A man has no respect for you and doesn’t appreciate that it was a privilege that even he got to see you naked if he shows naked pictures of you to anyone.

6. Pushes you to do something you feel highly uncomfortable doing with no remorse.

He doesn’t understand boundaries and the lines that shouldn’t be crossed. If he can’t respect when something makes you uncomfortable, run far far away.

You two are in a relationship; you are not his personal ATM card, you are not his chauffeur, you should not have to worry about your bills and his. He’s a grown man and is capable of handling his own issues without having to take from you or use you for anything.

This is a given, any man who has no problem laying his hand on you or any other living thing has no remorse and does not care about the outcome of his actions. Don’t let him get away with this, look out for yourself, or others, and leave/get them out of that situation that will only get worse.

9. Instead of abusing you, he’s abusing substances or alcohol.

10. Lying to you, even if it’s about the small things that don’t matter.

Men usually lie to survive living with us, but that is no excuse if they start sneaking around and lying about the small insignificant things, then what else will he lie about?

That obviously means there are some trust issues at work here and he needs to work on them. There is no need to read your inner most thoughts or private messages.

12. Taking shots at you, especially if it’s in public.

You should never humiliate each other, whether it’s only you two or in front of people, just to put them down. It’s just an insult in a form of a joke.

I don’t care how many people he’s been with you, there is no need for him to compare you to an ex, a random girl at the bar, a former fling, or a drunken one night stand. No one likes to feel like they’re in a competition with someone, especially if it’s an ex.

14. Dismiss any of your problems, or belittle the things that concern you or stress you out.

If he can’t help you solve your issues or calm your worries, then he won’t be a steady figure in your life you can depend on or lean on in hard times.

15. Put everything and everyone else first.

When you love someone, that person is usually (and should be) a priority in your life. Just as you become an important priority in theirs. You don’t want to just feel important, you want to know you’re important.

16. Bring up your past in a negative way.

You should only be focusing on the present and your possible future. Leave the past in the past, and if it happened before you two even started dating, do yourselves a favor and never bring it into your relationship.

He shouldn’t make you feel worse about failing. He should always be your rock, your unwavering support system, no matter what.

18. Doesn’t show you how much he loves you and appreciates having you in his life.

If your man can’t show you he loves you, then ask yourself why you are with him. There is no need for you to waste your time on anyone who won’t treat you the way you deserve to be treated. There’s also no reason to settle for anything less.

Unfortunately, once the honeymoon phase is over, you are just two people who need to deal with the ups and downs of life together. And that is when you see someone’s true character. There are certain pressures that everyone collapses under, and those can be forgiven. But there are other challenges that only a weak, distrustful person fails to rise to, and that is someone you don’t want to be with. The bad things are blaringly obvious; the other things…well, you be the judge.

Featured Image via screengrab from The Notebook.

5 Reasons Why You Will Always Be A ‘Daddy’s Girl’