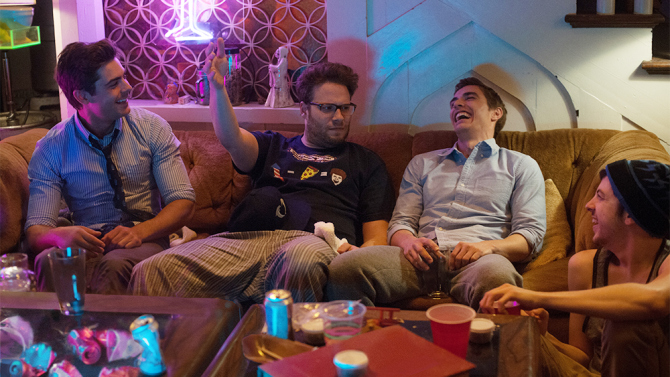 Men are a complicated species, full of mystery and curiosity that women are dying to unveil. All of us have had, at one time or another, a question that crossed our mind which seems just…inappropriate or uncomfortable to ask. Maybe there just wasn’t a right time to slide that question in a casual conversation, or maybe you didn’t want to ruin the rare moment when your pillow talk is actually full of meaningful chatter instead of post-intimacy awkwardness. There are some questions EVERY girl has pondered occasionally but yet no one ever seems to have the guts to speak up about. Well lucky for you, we took the liberty of asking a pool of men 10 questions we are all dying to know the answers to.

1. Is having a penis fun, or is it annoying?

“It’s fun, but annoying when you get random erections.”

“It’s definitely fun, but not for reasons you would traditionally think. You can like, swing it around, like when you’re in the shower or whatever.”

“It’s a mixture of both. It gets in the way sometimes, when you’re lifting or playing a sport. And girls know that if they’re pissed at you, they can drop us simply with a flick of the wrist.”

3. Assuming you’re not married, if your girlfriend got pregnant, would you stay?

“Probably not, I would convince her to get an abortion. I would think of anything possible to get her to not have it.”

4. Have you ever seriously thought about settling down and getting married?

“I’ve thought about it, and I’ve decided no. I mean, that sounds awful, right now. I’m 22 years old! But eventually, sure yeah.”

“I thought at some point in the future about possibly marrying a person, but she’s not mine anymore. And if I do get married it would be in my mid to late 30’s. I want to get married when I can’t go out and do stuff that 21 year olds do, like getting trashed every weekend.”

“Absolutely not. My parents are divorced and it was sh*tty. I don’t think marriage works out.”

“Yes, with the right person. Every girl I’ve dated I fantasized about getting married.”

“I’ve never thought about it, I’m worrying about school and getting a degree and supporting myself. Then I’ll worry about supporting other people in my life.”

5. What is your take on female body hair?

“Bald from the eyebrows down!”

“Some girls can work it…It’s not weird, we’re all human. There’s a limit, ya know? It’s all about maintaining it, as long as it’s clean…”

6. Would you consider seriously dating a stripper?

“Umm, I don’t know if I would actually get into a serious relationship with one. I would be scared some dude would tip her too much one night and she would sleep with him.”

“Absolutely! She’s smoking hot, and probably makes more money than I do, so I don’t see a downside to that.”

“No. I would feel awkward telling people [family] what her profession is…”

“No, I feel like if you have to be that low to make money you haven’t tried hard enough in your life to get a decent job to support yourself.”

7. Why do guys always do the bro hug?

“Because everyone does it…I never rejected one, and who knows what the consequences might be. And it makes us feel cool as f*ck, kinda like how some girls do the duck face in a picture.”

“It’s almost become an involuntary action. You don’t even think about it. It’s just something that society makes acceptable.”

8. What do guys actually want in the bedroom?

“Depends on the girl, and on the mood.”

“I want something consensual, and normal. None of that 50 Shades of Grey sh*t!”

“I just want to have sex sometimes…Any will do, really.”

“I want a bond between the two of us, to show that we care about each other enough to have sex and accept each other for who we are.”

9. Do guys discuss girls as much as girls discuss guys?

“We do talk to each other about girls…We’ll be like ‘hey that girl’s hot.’ ‘Yeah she is, I banged her yesterday.’ ‘That’s cool. *high five*’ I don’t know, that’s how I talk about girls…”

“Probably not, because guys don’t know how to talk about girls the way they should be talking about them!”

10. What is the first thing about a girl that grabs your attention when you meet her?

“I started looking for the hourglass, now. That’s my number one.”

Let’s be honest…We will never truly understand the ins and outs of the male species, but this is a minuscule sneak-peek into the way the male mind functions. We chose the best, most honest answers out of the bunch. The lesson learned from this experiment, however, was to never be afraid to be inquisitive! Most of the time, men can be pretty enthusiastic to answer the weird, uncomfortable, personal, questions that make your inner filter die a little. Also, some people just dig a girl who is so outspoken. So speak up, ladies! Ask what it’s like to pee standing up! Discover reasons why guys act a certain way or say the things they do! There’s a whole world of male-centered trivia to crack! (Get it?)

Featured Image via sceengrab of The Neighbors.

Why You Learn To Appreciate Having A Protective Older Sibling