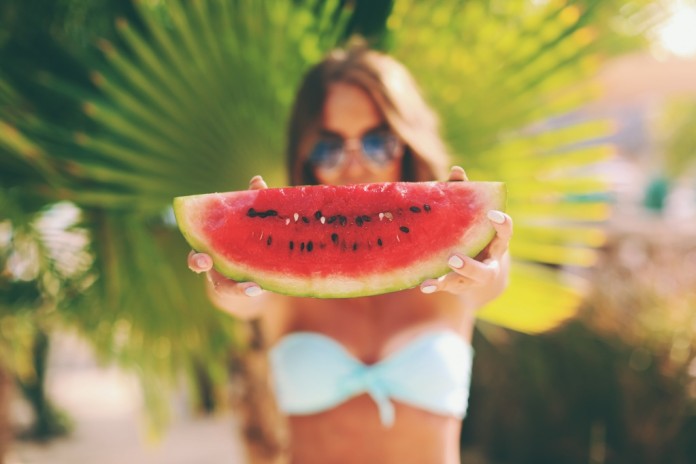 Ah, vegetarianism. Loathed by some and praised by others. Plant-based diets are growing more and more common as the awareness of poor animal treatment in slaughterhouses and the effects of processed meats on the human body are becoming more open conversations. If you contribute to the belief that ordering salads on dates is an offensive act, your mind might change after seeing which celebrities are actually doing it. The following veggie-loving hotties are proof that vegetarian and vegan women may just be more sizzling-and provide cheaper dates-than your $52 sirloin.

This country crooner is not only a blonde bombshell with killer legs, but a vegetarian as well. Says Underwood, “I stopped eating beef at 13 and stopped eating all meat a few years ago. I would feel guilty that what was on my plate was walking around yesterday. Either I could live with that or stop eating meat. I choose the latter, and I’m happier for it.” And we’re happier for it, too. Looking’ foxy, Car.

This iconic beauty has been a vegetarian since 2001. “I turned vegetarian after 9/11. A friend of mine came back from New York and said that he couldn’t stand the smell of burnt flesh. It immediately reminded me of a barbecue,” said Milano during one particularly intense interview. Nowadays, this actress is simply smokin’!

Oh, the beautiful Pam Anderson: she’s conquered Baywatch, Kid Rock, and our personally favorite, vegetarianism. Today, this MILF(who, believe it or not is 48 years old), is passing on her passion for animals to her children. Says Anderson, “Every time we go by KFC, my kids ask me to honk and they yell ‘Boo’ out the window.”

Since her breakthrough role in Clueless, Alicia Silverstone has done a lot more than merely break in her purple clogs. An avid animal advocate and member of PETA, Silverstone has extremely strong beliefs regarding animal welfare. The actress and mother said the following powerful statement in one interview: “Once people spend time with farm animals in a loving way…a pig, cow, a little chicken or a turkey, they might find they relate with them the same way they relate with dogs and cats. People don’t really think of them that way because they’re on the plate. Why should they be food when other animals are pets? I would never eat my doggies.” Woof woof, Alicia!

Seriously, Nat, could you be any more perfect? This stunner has a degree from Harvard, an incredibly successful acting career, and absolutely adores animals. Says the actress, “Part of my reason for being vegetarian was because it practices respect and love for life all through the day, so three times a day, you make a decision to eat things that have not been killed.” We feel, Nat, we feel.

The aforementioned beauties are proof that veggies really do the body good. Thinking about making the veg transition? Companies like Morningstar Farms and Boca Burger manufacture products that look and taste exactly like the real mccoy. You, too, can become a veggie bombshell. Cheers to broccoli, b*tches.