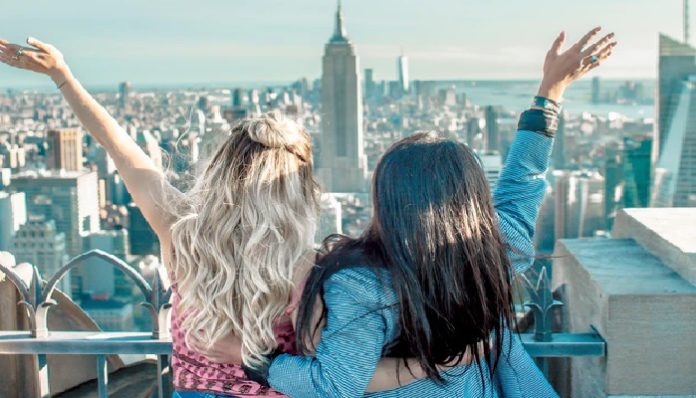 If you are under any preconceived notions that us girls don’t talk to our best friend about ABSOLUTELY everything, then you are more stupid than we thought. Sometimes, half the fun of dating someone is being able to dish to our best friend about the drama: the sex, the laughs, the fights, and the stress – it’s all a part of the relationship, and it’s all part of those girls’ night sleepover conversations.

If my boyfriend and I get into a lousy fight, I am calling my best friend right away to make fun of him and his idiocy (most of the time, I just impersonate him). If my boyfriend and I had an amazing night out, my best friend already knows about it because I snuck her a text while in the bathroom… If you ever think you have good news to tell me and she’s not hearing about it 3 seconds after the fact, you have got another thing coming. As much as my boyfriend is one of my best friends, he gets on my last nerve sometimes. It’s always nice to have a girl friend be there and know what’s been going on with you. It’s comforting, stable, and you know that she won’t place judgement on whatever it is you have to rant about.

Personally, I love being able to tell my best friend everything about my boyfriend. The majority of the time she agrees with me, and if she doesn’t, she definitely lets me know why. I mean, the girl isn’t out to get you, especially if you mean something to me. Sometimes, when you are on the inside of a situation, it’s hard to be objective and think about the circumstances unbiasedly, which is where my bestie comes in. It’s nice to have such a good friend bring you back to reality when sometimes your head is stuck in the clouds (or God knows where else). Needless to say, she knows everything about you… I don’t hold back (there’s too much to tell). Below are just some of the things my best friend knows about you.

1. The first time you farted in front of me.

I will never forget, we were in the middle of a serious conversation and you thought breaking the tension would be to let one rip and we both paused and started killing ourselves laughing. I was so shocked that’s how you decided to break the tension, but I must admit, it was absolutely hilarious.

2. That you’re not a patient person.

You mean well and try hard to compromise, but she knows about the fights we get into and when you’re being impatient with me. Sometimes, it’s your way or the highway and sometimes I need reassuring that my voice matters too.

3. That you’re an amazing kisser.

To this day, I still get butterflies in my stomach when you kiss me. My best friend knows (a little more than she should) about your lips and how well you can use them.

4. You get under my skin and I sometimes don’t mean what I say.

We all get into fights with our significant other, and of course we love to vent to our best friend about it and just get it off our chest. But there was a particular point in time where you got under my skin so much so, that I told you that you make me want to be “flesh-less”… Who says that to someone they love? Oops.

5. About your different kinds of laughs.

I can always tell when I said something hysterical because you let out this type of laugh that I don’t hear all that often. You’re more of a “laugh on the inside” kind of guy. So I almost pat myself on the back when I hear it. My favorite is probably when I thought I said something funny (but it wasn’t to you) and you would let out this small puff of air indicating “good try”.

6. When I saw your ex-girlfriend texted you.

I tried to play it cool, I actually didn’t mean to look at your phone when it lit up with a text, but just a natural reaction, I saw his ex-girlfriend’s name on his phone. I tried not to react and excused myself. Immediately, I called my best friend and started my rant about whether or not this should bother me. I don’t want to be the psycho girlfriend who doesn’t give her boyfriend the benefit of the doubt, but I’ve got to have a vent system somewhere.

Definitely not something I like to admit, but after our first date, I told my best friend everything. About how nervous you looked coming to my door, or when you didn’t want to sit across from me at the restaurant, rather beside me, so we became “the couple that sits on the same side of the booth”, all the way to you kissing me good night. So, that same night, we decided that it would be best to creep every social media site you were on.

8. When he said his only way to get through his exam was to cheat.

I saw how stressed out he was studying for this exam he had, but I am very much a “goodie-two-shoe” so when he said he was going to cheat I was taken aback. I honestly wasn’t sure if I should slap some sense into him or just let it slide… I talked about it with my best friend, if it’s my place to say anything, because I don’t want to be a nag, and it’s his school work, not mine. So, I needed to know from her if I was overstepping.

9. That you make me happy; happier than I’m ready to admit.

At the end of the day, I am a better person when I am with you. And at the end of all the fights and smack-talking I do about you, my best friend knows that I am exactly where I want to be and that you’re exactly who I want to be with.

You might not agree with this and maybe feel a bit uncomfortable that my best friend knows every detail about you, but for me, there’s nothing I would change about that. She brings me back to reality when I am out of line, she encourages me to surprise you with an idea I had, she holds me when we get into an argument, and she yells at me when I did something stupid.

She keeps me grounded and level-headed. I feel like we all need a moment of clarity every once in a while, and she does that for me. Like I said before, sometimes we are too involved in the situation, that the “right” or “obvious” answer, doesn’t seem as clear to us, but my best friend always knows me well enough to set me straight and help me admit to feelings for you I may not have before.

How Moving In With Your S.O. Will Change Your Whole Relationship

Why Your Friends Don’t Know You As Well As You Think...