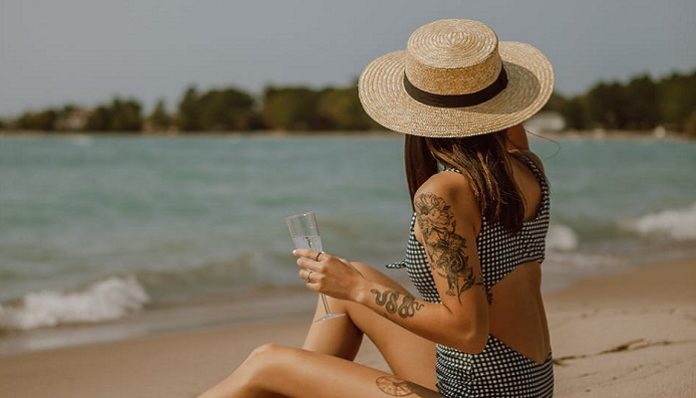 A few weeks ago, I was at the gym, and I overheard two men having a discussion about tattooed women. The first man was relaying how he thought tattoos diminished from the beauty of a woman; that tattoos belonged on men. He went on and on about how ugly they were on women. Just as I was starting to become infuriated, the other man interjected to say that his wife had tattoos, and he thought they were all classy and sexy.

As a woman who has tattoos, I was angry as the first man was speaking. I love my tattoos. I carefully picked what I was putting on my body, knowing full well that they would be there forever. I am happy with my choices, and I think they help accessorize my body perfectly. I am not covered in them by any means, but even if I was, who else is to judge? I happen to LOVE my body, AND my tattoos. I admire the artwork that other women put on their bodies as well.

This is a tribute to all the women out there who have beautiful tattoos. And even the women who have tattoos they regret or no longer like. OWN IT. We are beautiful, and we are JUST as entitled to having tattoos as men are.

Cara Delevigne – First of all, can you say hot? This woman is a goddess. AND HAS TATTOOS. She wears them beautifully.  Cara is seriously one of my idols, as well as an exemplary figure for millenials everywhere. Personally, I would kill to have her bone structure. And her skin. And her tattoos.

Megan Fox – This is a woman who wears her tattoos proudly. They are almost never photoshopped out when she’s on magazine covers or in ad campaigns. Which is saying something, because having tattoos in the modeling industry is usually seen as a downside, and the fact that they don’t retouch them when she’s on the covers of major magazines is pretty powerful. Her tattoos are prominent, and she is proud.

Angelina Jolie – We’ve seen Angelina Jolie transform, and she’s always been an icon. Through every stage of her life, whether actress, model, or mother, she has shown off her jaw dropping tattoos. I love how she’s refuting the idea that you can’t play those roles while having tattoos. I know women who think tattoos are fine, until that woman becomes a mother. Then suddenly it needs to be something shameful? No.

Rihanna – Ri Ri is COVERED in tattoos. And we LOVE IT. This woman can pull off any look. And I mean ANY look. She is sexy, she is confident, and she is inked.

Ruby Rose – As someone who has never seen Orange is the New Black, I can’t personally attest to her being a major woman crush. However, I pay enough attention to social media to know that Ruby Rose is considered a goddess and her tattoos deserve recognition.

Miley Cyrus – I remember hearing about Miley’s first tattoo when I was at the young age of 10. And she has only been adding to the collection since then. Her latest? A yellow ladybug on the inside of her lip. While I personally don’t want a lip tattoo, I applaud her for doing whatever the hell she thinks is beautiful to her body.

Katy Perry – Another woman crush worthy popstar who shows plenty of skin, and plenty of ink. There are a thousand reasons why I love Katy Perry(It used to be a personal deal breaker if a boy I wanted to date didn’t like her), and her ink is just one of them. She’s an inspiration and a trendsetter, and I am more than willing to follow in her wake.

These are only a mere few of the amazing women around the world who have tattoos.

I sometimes can’t believe the negative attitude toward some women’s tattoos. Their body is THEIRS. You can do what you choose; what you think is beautiful. Although some people wear tattoos that I personally wouldn’t wear, or some that I don’t find appealing, it doesn’t matter to me. Because it’s not on MY body. Tattoos are a piece of art, and if a woman wants to express herself with one, then we should celebrate it, not scorn it. Women can have beautiful tattoos, and we LOVE IT.

5 Ways Parents Seriously Need To Get Their Shit Together