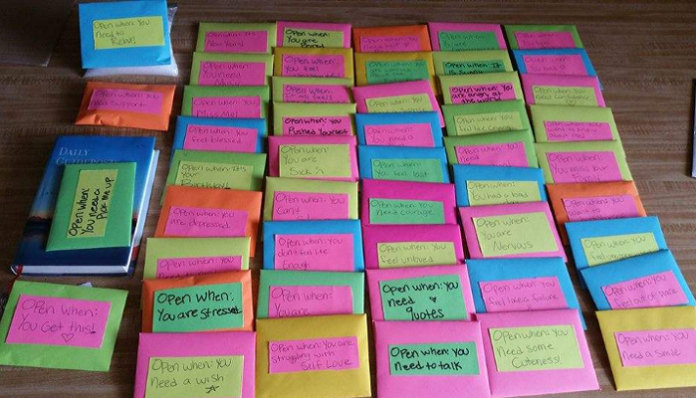 Sometimes, the smallest thing can make the biggest difference. Even if you just lost your job, got a heartbreaking diagnosis, or are just plain worn out from the world around you, small gestures can make everything OK, even just for a moment. “Open When” letters do exactly that, so I recommend you try them.

What are “Open When” letters?

It’s a pretty intuitive and — apparently — popular thing. In fact, Shari’s Berries shared a post back in 2017 with 280 “Open When” letter ideas as well as templates. In the article, they’re defined as “a series of letters with instructions for opening at a later date or time. They can be as general as ‘when you miss me,’ ‘when you’re feeling blue,’ or more specific like ‘for your birthday’ or ‘when you graduate college.’ Ideas and themes can be as creative as you like — the more specific to the individual (including favorite jokes, movies, TV shows and other shared memories) the better.”

Said differently, they’re a set of pre-written cards from you that loved ones can open in certain situations — especially the ones where they need support. Before scouring the internet years ago, I had no idea either. Little had I known, I’d received these in some of my hardest moments. They made such a difference.

When I was a struggling teen dealing with some pretty heavy emotional issues, what lifted my spirits was seeing that I’d gotten something in the mail. I didn’t know who they even came from. However, it didn’t matter. What mattered was that they were filled with encouragement, love, acceptance. In fact, I have kept those letters through everything life has thrown at me and you know why? Because the few cards and letters I received were exactly what I needed to cope with the issues I struggled with.

I’m not going to promise that “Open When” letters will solve all of your friends’ and family members’ problems. They won’t. They never solved my issues completely, but to me, that wasn’t what mattered.  When you’re really down, it means so much to have the support and know someone cares about you.

Moreover, if you live far away from someone, this is an amazing way to keep supporting them from afar. No matter the distance, you can be there — in written form — whenever they find themself in a tough situation but don’t have the strength to reach out. Instead, they can open your letter.

My experience receiving these letters made me want to brighten up someone’s day, to make a difference, no matter how small, in their lives. I strongly encourage you to write a set of “Open When” letters for a person or two in your life. It doesn’t have to be a huge stack — even 2 or 3 is a great place to start. You won’t regret it.

What situations would be most meaningful for an “Open When” letter for you? Tell us in the comments!