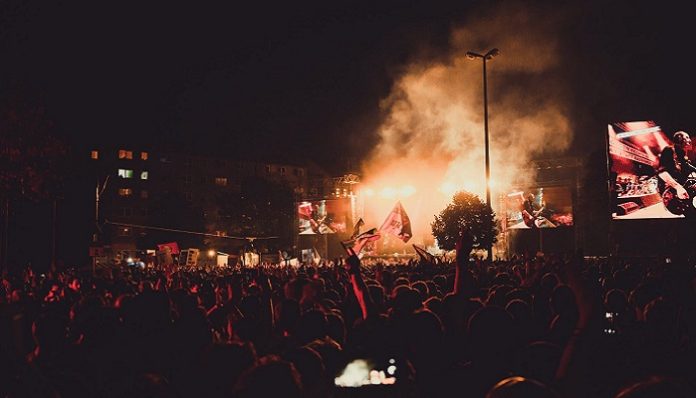 Recently, I was jamming out like the fan girl I am at the Walk the Moon concert. My roommate had scored us some tickets early on, and we made all the necessary precautions to get there in a reasonable fashion. We called for an Uber so we wouldn’t have to deal with parking, we got there over an hour early so we could get decent spots to see the stage and we got pretty friendly with those in the line around us. (We wanted to develop a relationship with the other awesome people who bothered to get there early.) While we did have an awesome time, it was not without some bumps in the road.

There are a few things that really irk me about people’s behaviors at concerts. Like, for example, if you’re late, you should just understand that you probably will not have the best place in the crowd to see the stage. This should be understood and accepted. If you know you can’t get off work until 7 p.m. and the concert starts at 7 p.m., you should safely assume that people have already been there for hours. With that being said – elbowing, pushing and jabbing your way up to the front of the stage is simply rude and unacceptable. You were late, you shouldn’t punish anyone else for your bad timing except yourself. I’ve been standing in this spot since I got here, at the reasonable time, and now I have to stare at the back of your head for the last three songs of the set. Welcome to Asshole City, you’re the mayor.

If that’s not bad enough, don’t be those people that stand dead center, dressed to the nines, and don’t know a single word. At the Walk the Moon concert, there were girls everywhere in backless dresses, beat up sneaks and face paint. Lots and lots of face paint. They, however, only knew the one radio hit song the entire show. They didn’t know the opening band, either, so I couldn’t give them any excuses. Instead, they stood blocking the stage of our favorite band just standing around drinking water because they weren’t old enough for the Anna Sun moonshine. If you aren’t really a fan, you shouldn’t get the best seats in the house. You should respect the fact that you aren’t really a fan, take a side seat, and have all the fun you would have had standing dead center. Trust me, you don’t have enough followers on Instagram/Tumblr to make those second class photos you took somewhat worth it.

Perhaps my least favorite of all the annoyances I have would be the girls who don’t even take pictures of the stage…they just take pictures of themselves. What’s the point of the entire show then? You could have been at any show and taken the same pictures. You could have been at home and taken those pictures! If you’re going to SnapChat your drunk bestie and not even bother to genuinely listen to the music or watch the stage, you should have gotten drunk in your mom’s basement (we all know you’re underage, it’s no secret) and stayed out of my way.

If you’re not of age, too drunk, or too annoying to respect the unspoken rules of concerts and festivals, you really shouldn’t go at all. You can safely assume that there are genuine fans in the audience who are glaring down upon you but won’t say anything in order to not kill the vibes of the other genuine fans. More importantly, they won’t say anything so the professional videographer doesn’t pick up the insults they’ll throw at you. Follow these rules and I promise you everyone will have a good time.

Why Pride Month Is About More Than Rainbow Flags & Parades