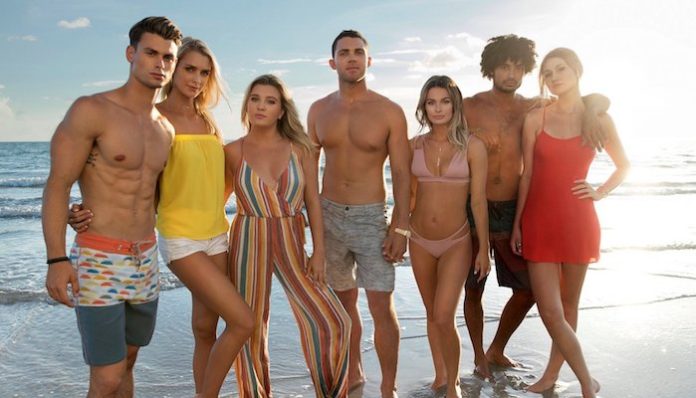 Do you ever sit back and miss the good old days of MTV? Not the actual Music Television Station, but the old programs that you could quote in your sleep like Laguna Beach and The Hills? The moments of Kristin yelling “Stevennnnnnnn” and Lo making sure no one hurt her bestie (and our bestie) LC. How about the moments that filled you with rage when Spencer was being an absolute douche-bag to Lauren on The Hills, or when you wanted to stop Jason from breaking our girl’s heart and convince her to just go to Paris? I mean really, can you go through a break up without saying “Homeboy wore combat boots to the beach!” If you are desperately missing those days and looking for a show to bring back those good old feelings, never fear my MTV bingers. I have found you the program to fill all your drama “reality” show needs and beautiful people to fall in love with, and that is Siesta Key.

I know what you are thinking “I’m too old for this crap now. I grew up with the cast of Laguna and could relate to them. I will never be able to tolerate these young millennials with their juvenile problems.” Believe me, my friends, you will! I went into this saying I will only watch the first episode and make fun of it; we’re now on Season 2 and I need to know everything about these people’s lives. While it might make you question where you went wrong in your lives to not have their mansions their parents own, why your stomach will never be as flat as theirs or how they have more relationship problems in one season than you do in your own life, it will make you feel a little bit better about your life and the lack of drama that occurs in it.

Drama, drama, DRAMA! Who would think that there could be so much drama in an hour long program? Those of us that devoured Laguna Beach and The Hills should know what to expect, but for you newcomers to the soap opera at the beach, prepare yourself for it. This one is hooking up with that one and then that one is punching that one, and then they are hooking up with their original people all over again. There is always that girl who is gossiping too much or that one guy that puts himself in the wrong situations, but that makes for the drama that we like to watch unfold. It is a sweet treat for all your drama needs and a guilty pleasure that will make your head spin!

Is the drama real? Hell is the entire problem real? Who knows. We all thought that Laguna Beach and The Hills were real until that very last episode where Brody and Kristin showed us that not everything was as it seemed. While it does seem as though most of the cast did really grow up together, some of the story lines might be a little bit of a stretch to just create a good show. We also might very well receive an ending similar to the one of The Hills, but for the time being, we can sit back and enjoy the drama from our couch.

Ginger Views: Binge on it immediately! While it might seem that you’re too old to continue watching programs like this, you aren’t. While it might seem that this is exactly what Laguna Beach and The Hills was, it’s not. While you think you might have too many television shows on your plate right now, you don’t and you should make time for this one. It’s worth it to see the drama unfold and enjoy a laugh at their expense.