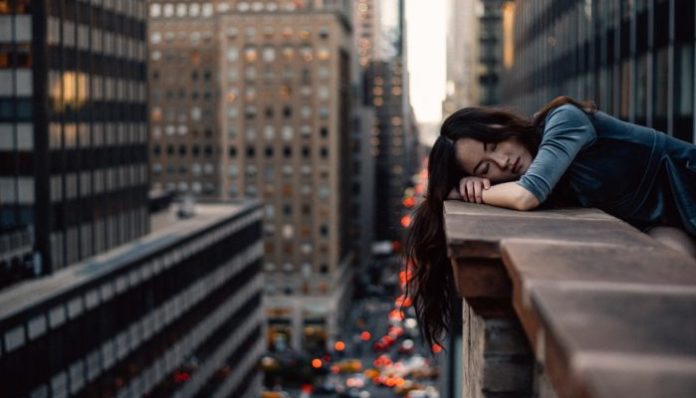 At some point, I realized I had grown too complacent, too comfortable with my life.

And it wasn’t the good kind of complacency, either. My life was unbelievably f*cking boring. I was living with my then-boyfriend and his friends in this oversized sub urban home living the same day over and over. Honestly, it felt a lot like Groundhog Day with Bill Murray and Andie MacDowell. Work, dinner, sleep, repeat. I felt stuck and unmotivated in a situation where I should have felt excited and inspired. Suddenly I felt like I needed a new life.

Oddly, it was really lonely, too. Ever woken up beside someone who could not care less that you were there?

Lonely. I was constantly surrounded by people. My boyfriend, his band, our roommates, friends, occasional family. People coming in and out leaving an endless trail of Chick-Fil-A cups and sandwich wrappers in their wake. I can say with 100% certainty that some of our guests spent more time in our home than I did. But I wasn’t happy. I felt surrounded by people who didn’t know me, yet knew almost everything about me. I felt drowned out by everyone else’s creative energy. Everyone had a story to share together, and I couldn’t help but feel like an underwhelming curl in the current. Complacent. Losing myself in the void, forgetting my own goals and ambitions in the riptide.

Leaving was probably one of the hardest things I’ve ever had to do. And I left everything. My boyfriend, my friends, my sheets, my life. Sadly, even my electric wine opener. Everything. And no, it didn’t really make a whole bunch of sense at the time as I was stuffing clothes and useless shit into bags and steamrolling out of there. I spent weeks crying my eyes out at my new apartment, b*tching to everyone and anyone who would listen. I spent an even longer amount of time trying to get back with my ex, begging and pleading. Desperation is never a good feeling, especially when the other person doesn’t give a sh*t about you.

At first, none of it made sense. I didn’t even fully understand why I did it, why I left. I had this general feeling that I needed something more. Something better. Something that is actually good for me. And, somehow, I got all of that by leaving it all behind. I had to get comfortable coming home to my house, making my own routine, creating a life that belonged to no one else but me.

As weird as it sounds, I feel more awake, more alive, after leaving it all behind. I haven’t felt lonely in a really long time, at least not since starting this new life.

There is something about forcing yourself to recreate your entire identity. So much about yourself is hidden by your surroundings. I shed it all like a second skin and let myself be raw, vulnerable to a new experience. This new life made me realize how wrong it all had been for me.

I’m holding myself accountable for a lot of things I had swept under the rug before. Like, for example, my anxiety problem. Being surrounded by people and their experiences let me ignore my own issues. I was allowing myself to become this crippled, shell of a person while endorsing into the problems and dilemmas of everyone around me. I’m addressing my issues head on now. Now, I’ve been forcing myself to be more aware of my anxiety and how to overcome it. My “triggers” and offsets have become much more identifiable and, as such, much easier to reduce and manage. I’m feeling better, sleeping better, doing better.

I’ve taken charge of my financial situation. Handling money better has given me an ability to actually spend this money on myself. I beat myself up for ordering pizza before, but being more mindful of where my money goes has let me feel more comfortable with spending. It’s not that money can buy you happiness, but when you can buy things without feeling regret and shame… a little goes a long way.

Just yesterday I had a memorable experience cheese tasting. Who the f*ck does that? Me. And I have no regrets about it.

Don’t get me wrong. This breakup has been the hardest thing I’ve ever had to do. When you do actually love someone but need to grow, it’s hard. There were a lot of aspects of our relationship that wasn’t healthy for either of us. One day I hope that we get to meet again as different people. Perhaps not different entirely, but more enhanced and mature individuals who are ready for each other. As they say, if it were meant to be, it would be.

Being left with nothing truly shapes you as an individual. I, personally, had to start from scratch. My path wasn’t necessarily wrong, but it wasn’t leading me to the destination I had always envisioned for myself. And that’s ultimately what your 20s are for. You have this decade of time to scrap something and start over if you need to. The way I see it, you get 10 free years to f*ck up and restart as often as you want. Find yourself. Find the path that’s right for you and leave the rest behind you. If it were meant to be, it’d all work out in the end.

What I Wish I Knew Before I Fell For A Narcissist

Why The Best Kind Of People Are Those Who Get Excited...