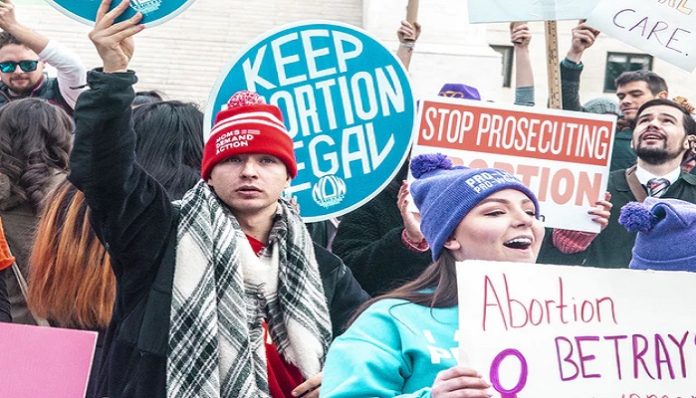 Hi. I am a girl.. woman.. female.. lady.. however you want to label me is fine. I care about my reproductive rights, equal pay, the right to vote, all of it! But this weekend you couldn’t find me in Washington DC, or any other major city, with a pink sign in my hands or cat ears on my head.

Because I am a woman and I made a choice .

Why? Well because I was granted the ability to speak for myself and to make up my own mind and to go about my own business a long time ago. That’s what we are all fighting for, for the right to live our lives freely, without boundaries and judgements from others. So I didn’t go. I exercised those rights and made a decision that I don’t regret.

Taylor Swift was ridiculed via Twitter for not attending any march and for only sending her well wishes over social media. 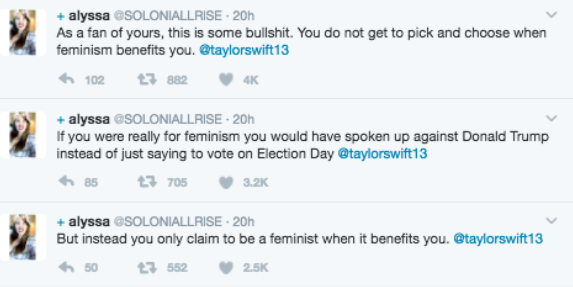 And yes, Taylor Swift does label herself as a feminist, but her not marching doesn’t make her less of one. The thing with this feminist word is that people take it so seriously. A woman or a man can exist, can want equality, can support females, without yelling in a megaphone. You can be a feminist just by acting small and locally to do things that empower women. Not every person needs a soapbox to make a difference.

One thing that actually upset me about the march was that a group of pro-life women were forced out because they’re beliefs didn’t align with the organization behind it.

Our statement regarding press today: pic.twitter.com/z1y9cfFFvY

So, to clarify, at a WOMEN’S MARCH, not all women were accepted. Women that, just like those standing for hours at Trump Tower or at The White House, were trying to get their voice heard and trying to protect their rights, were not permitted to. That is literally the opposite of what the women’s march was trying to do and clearly some marchers didn’t get that.

Because of that, I am glad I didn’t attend. I am a pro-choice democrat who is unaffiliated with a religion and likes men. I have friends that are devoutly religious, pro-life, republican, gay, and a thousand other labels people have pushed upon them. If you identify as a woman or support women in any way, you should have been able to participate in any march you wanted to over the weekend. And you also should have been able to not march without being harassed and shamed.

There cannot be equality if we continue to judge and ostracize people that do not agree with us.

Let Rhianna and Amy Schumer and Emma Watson and countless other female celebrities participate. Let Taylor Swift and myself and the women who were working on Saturday, who spent the day with their children, who simply enjoyed their freedom by doing something else, let us sit out and appreciate the rights we have.

This political demonstration, and all others, are not just places you can take a selfie at to show how much you care. They are meant to really bring about change and to inspire others to look outside of themselves. They are tools that start a revolution, that get people to call representatives or start petitions. That is what matters. It matters what we all do behind the scenes and in our own community to make change happen.