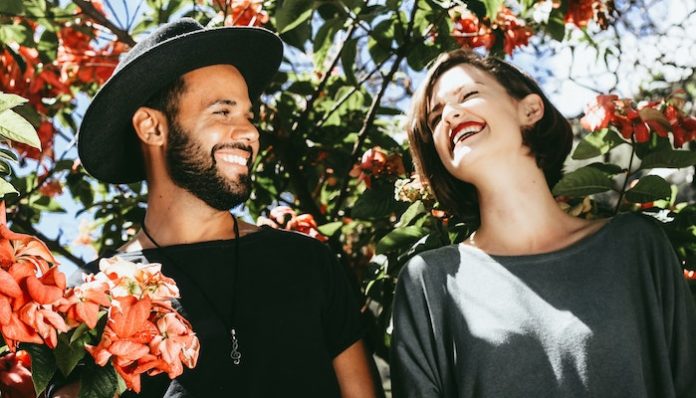 New research has examined the tactics women use to competitively flirt against other women to win the attention of men.

Most straight men could only dream of having multiple women competing for their affections. The research found in this study may help men spot these situations if they’re lucky enough to find themselves in one.

What is competitive flirting?

Women use competitive flirting tactics to not only convey their interest to the men they’re flirting with, but also to let other women know that the guy is theirs.

It’s the kind of activity many of us are used to witnessing or participating in while at a bar on the weekends.

But, through the lens of this study, the actions can be seen almost as a kind of mating ritual employed by women to pursue a mate.

We are all animals, after all, so it’s no wonder women have developed covert ways to show their teeth when seeking a partner.

These tactics likely work both ways, as well. Men certainly have plenty of unique ways of cautioning other men when flirting with women. But, this particular study focuses solely on the actions that women employ.

Women use nonverbal tactics to out-flirt the competition

Researchers compiled a list of 11 nonverbal flirting tactics, that are used competitively, based on the most popular responses revealed by 91 heterosexual women.

In situations where women went head-to-head with other women to win access to a man, these tactics served as a way to vie for attention.

The study identified the specific competitive flirting tactics women use:

These tactics are different from the ones women use in situations where no perceived competition exists.

Other research indicates that the most effective way to flirt with a man is by moving closer to him, rubbing against him, or kissing him on the cheek.

In a second part of the first study, 89 women and 50 men rated the perceived effectiveness of these competitive flirting tactics.

They found that most agreed that touching, initiating eye contact, hugging, giggling at his jokes, and butting in were the most effective ways to win over a man.

The study only accounted for what people perceived the most effective tactic to be, rather than what actually works.

It also takes a somewhat heteronormative approach to dating by failing to account for whether or not competitive flirting exists in non-heterosexual encounters.

Equally, the study appears to only compare the perceived effectiveness of these tactics. It doesn’t analyze what happens if a woman doesn’t engage in competition when seeking a partner.

We spoke to dating coach, Ronnie Ann Ryan, who believes engaging in competitive flirting can be to a woman’s detriment.

“Men get invested in winning a woman over so this creates a conflict if you chase him,” she says. “A great guy will rarely be genuinely interested in a woman who pursues because it eliminates the sexual tension from the start of dating.”

Ryan tells us that competitive flirting can appear desperate to men or other people. Battling it out for the attention of a man certainly won’t win you any female friends.

These tactics may also only achieve short-term results as they rely on tricks and games rather than the pursuit of an authentic connection.

“If you want lasting love and the real thing, be your best self, be friendly and inviting,” Ryan says. “Leave chasing men to other women who won’t appear confident, self-assured, or like they value themselves, the way you do.”