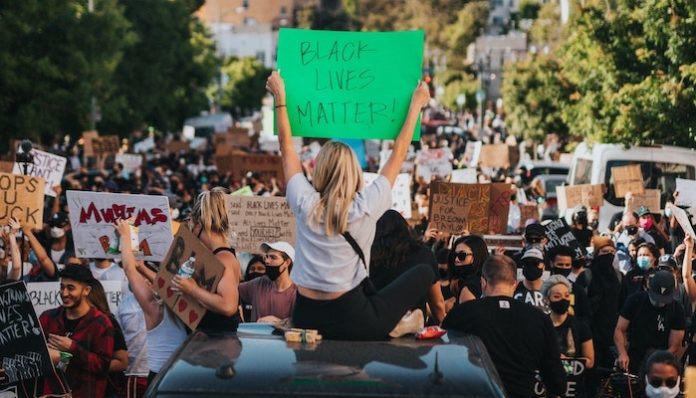 I know from personal experience that all cops aren’t bad people, both my brother and father are police officers. I appreciate all that my dad has provided for me through his occupation, but I will always believe in standing behind my values of equality and social justice.

I have always respected police officers and have made cookies and Christmas cards every year to deliver to the police officers who are working on Christmas Eve. I also have had many positive interactions with my dad and brother’s friends. But, unfortunately, there has been a lot of disagreement in my family based on my views on the need for policing reform in the United States.

However, from my education and life experiences, I also know that there is a serious need for criminal justice reform and better police training due to systemic racism.

I strongly believe in the people’s right to peacefully protest and believe that change and reform have been needed for a long time. No person should ever be allowed to hold their knee on someone’s neck for nine minutes until they suffocate. This should have been known before George Floyd’s death on May 25, 2020. George Floyd’s death is just one example of the many individuals that need justice for their wrongful deaths by the mishandling of police.

I also believe those police officers that may have higher morals than their coworkers who are abusing their power need to speak up when they see injustice, no matter how strong the sense of “brotherhood” is in the force. It should be a basic human right for those that are interacting with police officers to not fear for their life.

I am a strong believer that police officers can take off their badge, but minorities cannot “take off” what causes so much discrimination against them by police.

I am a strong believer in the Black Lives Matter movement, and I am glad that it is becoming “mainstream” and gaining traction because these topics have needed to be discussed for a long time. Unfortunately, with this President and his administration, social change may not be plausible.

I realize that there are police officers who do good in this world. However, there needs to be more acceptance that there is always room for improvement, and we need to look at the ways that the police force can be improved. This could be through more extensive training, reformed training, or drastic changes in the way that policing is handled in this country altogether.

These officers’ use of deadly force should be condemned no matter who you are because nobody deserves to die in the way that Breonna Taylor, George Floyd, Sandra Bland, Trayvon Martin, and Philandro Castile have –– among many others.

As the daughter and sister of a police officer, I encourage you to fight for change that is making a difference, whether you are out there protesting, signing petitions, calling/writing your local lawmakers, or donating money.

It is also important to note that all Black lives matter, whether we are talking about Black male lives, Black LGBTQ+ lives or Black women’s lives. Another important thing you can do is to remain educated and educate those around you. A few documentaries I found extremely informative and powerful were “13th” or “When They See Us” on Netflix.

Never stop fighting for those who are oppressed and marginalized.

If you are interested in learning more, here are resources to support:

The Movement For Black Lives

NAACP: We Are Done Dying Campaign