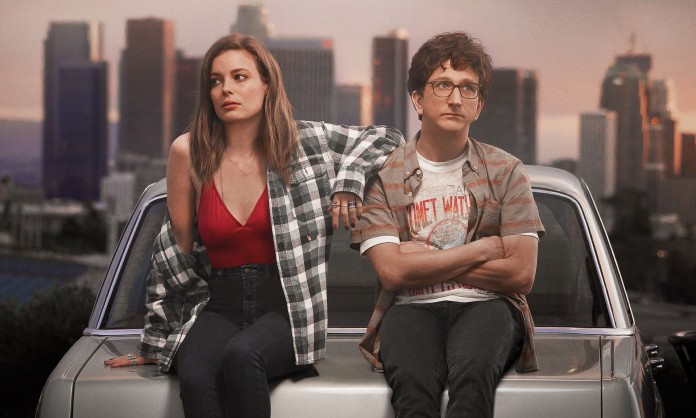 There’s nothing I love more than snuggling in at the end of a long day with my husband to watch some Netflix. However, as any couple would know, there’s always a debate that must occur about what you’re going to watch that will no doubt end in one person highly annoyed and less engaged in the show than the other.

I don’t know about anyone else, but to me, agreeing on a show is actually really important for both of us to get the most of our quality time together. If one of us isn’t enjoying themselves, it puts a damper on the whole experience for us both.

So, even though you might be obsessed with Pretty Little liars and feel like you’re dying to see the next episode or he feels like he has to insist on yet another episode of Mad Men, save those for your solo evenings. Here are 7 shows you’ll both love binge-watching as a duo.

The Office is pretty much the greatest show of all time. It’s a remake of the not-so-successful UK version surrounding the offices of Dunder-Mifflin Paper Co. Their boss is wildly inappropriate and the mixed-bin of employees includes; a salesman in love with the secretary, a crazy cat lady, an accountant who can’t do basic math, and a beet farmer. You’re guaranteed to fall in love and binge watch all 9 seasons within a week.

Master of None takes an honest look at dating culture in modern society. Dev is just a regular guy living in New York City. He’s an aspiring actor who spends his free time hanging out with friends and searching for love. It’s one of the best Netflix Original series out there and you’re both going to love laughing through each episode.

The Big Bang Theory is one of the top television shows currently on-TV and it’s for good reason. The show revolves around 2 physicists who are friends, coworkers, and roommates. A hot new girl moves in across the hall and as one of the friends pursues her romantically, we are introduced to 2 more of their quirky friends. The show is hilarious and you’ll love rooting for your favorite couples throughout the series!

Assuming you haven’t both already seen this entire classic series, it’s a great one for a couple to binge-watch together. The show revolves around, as you can guess, friends. There are 6 of them, all living in New York, with super different personalities and lifestyles but they have one thing in common, they’re all awesome. Chances are you’ll be able to identify both yourself and your partner in at least one of the characters. Enjoy 9 seasons of watching them laugh, cry, and fall in love.

If you love Judd Apatow’s work (and let’s face it, who doesn’t?) you’ll love this series. It’s one of his earliest projects that should’ve gone on way longer than it did. It centers around a brother and sister who are in high school during the 1980’s. There are two main groups, the Freaks who are popular but a bit deadbeat, and the Geeks who are well…geeks. The show confronts all the typical “high school issues” of sex, drugs, drinking, and growing up, in a funny but realistic way. You’ll love watching Seth Rogen and James Franco in their first project together!

This show is the perfect combination of romance and humor that every couple needs. Long story short (and it’s a really freaking long story), a guy named Ted decides to tell his kids the story of how he met their mom. The show centers around him and his friends as they navigate adulthood and try to make sense of their lives while settling down. It’s a show anyone can like because it offers something for everyone.

This is Netflix original series takes a look at the way we date. The show focuses on two characters (one guy, one girl) to get their unique perspectives on relationships. Gus and Mickey are both going through messy break ups when the show begins. The characters wind up meeting and becoming friends in the midst of rebuilding their lives which of course, soon becomes more than a friendship. The show is fairly new but has already been incredibly successful with both their male and female audiences. It’s sure to be a hit for both you and your partner.

Technology plays a major role in people’s lives in this day and age. One of the best examples of that technology is television but I don’t see why that has to be something that separates us from the people we love. Choosing shows you both enjoy doesn’t have to be a battle or a constant compromise. You will no longer have to “Netflix & Chill” without the Netflix (in fact, with shows this good, you might not even want to chill.) Give one of these awesome series a chance and settle in for a night in you’ll both love!