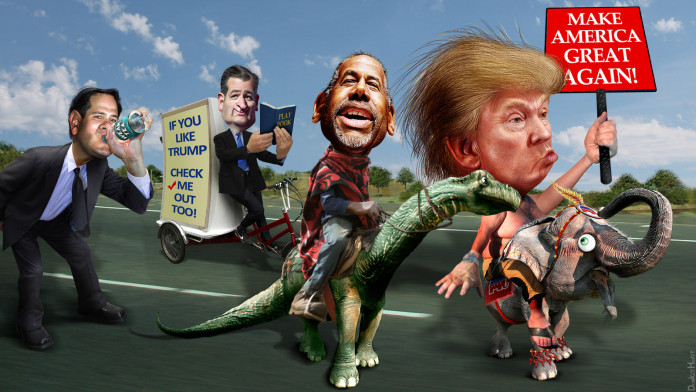 The drama of the Presidential race has reached a breaking point this month, and it’s bringing out the worst in everyone. Just this week, a totally viable option for President Donald Trump was quoted as saying,

“I love the poorly educated!”

Last week’s Republican debate was even worse. Knowing it was the last debate before Super Tuesday, the candidates clearly felt the pressure to secure some big wins, even if it meant downright bullying one another.

Watch as Marco Rubio, smiling to himself in satisfaction, brings down the house and riles the crowd against Trump:

This is the first time I've actually seen Donald Trump humiliated on a GOP debate stage.

I’m sorry – are we in high school?

These days, it feels like the Presidential candidates have devolved into a high school social scene, a circus of judgmental comments and throwing shade.

In light of this madness, we bring you: the remaining Presidential candidates as their high school stereotypes.

Rubio and Cruz clearly presented a united front last night in their attack against Trump — looking like Crabbe and Goyle as they turn against Malfoy. Two undeniably educated men (who will never cease to remind you of it), they’re a pair of Prep school boys, wearing suits and ties as they make fun of public school kids. But don’t ever dish back some of their attitude, because they will whine like this and run home to mommy.

It pains me to waste any more words on Donald Trump. He is hateful, loud and generally uninformed. Trump is the assh*le that falls asleep in the back of your math class and then, gets the teacher fired when they try to give him detention. (Which also sounds like Malfoy, now that I think about it.) He’s the bully that gets too aggressive in social settings and probably feels entitled to hit on girls in the hallway.

Yet, no matter how often you scoff and roll your eyes, this lacrosse bro still doesn’t get that you hate him.

Say what you want about where Hillary Clinton has speaking engagements or how much she gets paid for them, but she’s a very serious person. Clinton’s the kind of lady that would raise her hand in social studies and ask, “But when will we cover female genital mutilation?” If I’m sticking to Harry Potter metaphors, Clinton is Hermione Granger, assuming of course that Hogwarts dealt with such gender inequalities as we do.

Bless his heart, 74-year-old Bernie Sanders is just everyone’s grandpa that used to be a radical “back in his day.” In high school, Sanders was the guy to come into class late, drop his books all over the place and reek of the bowl he just hit – but he’d still know every answer. He reminds me of loveable Hufflepuff Neville Longbottom with a particular interest in Herbology…and social justice.

Although Christie is no longer in the race, he tried his best to jump back in the spotlight last week, when he spoke publicly to endorse Donald Trump. Come on, Christie! It really hurts me to watch you try so hard.

However today’s Super Tuesday results come in, the winners will definitely take a back seat to all the candidates’ drama – and there’s still over eight months of this bullsh*t. When you can today, take a moment to revel in the idea that any one of these buffoons could actually become our President.

Dollars and Sense: 5 Tips for Saving Money After College