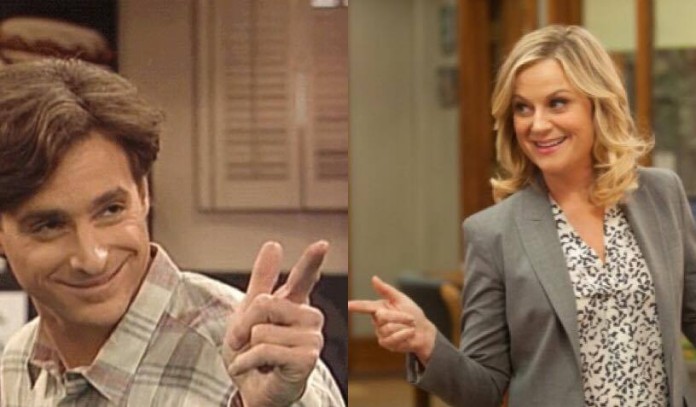 Have you ever noticed how you get so invested in TV shows that you feel like you know the characters on a deeply personal level? You watch them go through heartbreak, triumphs and failures, and see them grow. So, is it any wonder you find yourself seriously wishing you could somehow intervene in their life? Encourage them? Set them up on blind dates? It can’t just be me…

I think it would go something like this. Here are the top 8 couples you never realized belonged together because they were on different shows.

Both Gilmore Girls and 7th Heaven ended successful runs in 2007 but we can’t help watching reruns. Both David (David Gallagher) and Rory (Alexis Bledel) went through teenage and young adult years on their respective shows. Growing up took them from sweet, innocent teens, through some slightly wild years. They both dated some questionable people and made some poor choices. But in the end of the series, they ultimately were on paths to becoming great people. Rory, an overachiever of sorts, and David, a bit of a slacker may have balanced each other out well.

The Big Bang Theory has been a fan favorite since it’s 1st season in 2007. Tiny Fey’s Netflix Original series Unbreakable Kimmy Schmidt has a huge fan base amping up for it’s 2nd season this Spring. What do these two shows have in common? A weird, slightly inexperienced character. Kimmy (Ellie Kempar) and Raj (Kunal Nayyar), both share a mutual desire to fall in love but for their own reasons, haven’t had the chance. Both these characters are super adorable and are great to their friends. Kimmy’s inability to understand the world around her since it’s all so new, would serve the couple well when dealing with Raj’s obsession with his dog and mildly inappropriate friendship with Howard. Raj’s kind nature would be useful while he helps guide Kimmy into the 21st century.

Now, I know that Leslie (Amy Poehler) found true love with Ben and I fully ship this couple to the ends of the earth. However, if you watched Parks and Rec from day one, you also waited patiently for Leslie to find the one and couldn’t help but wonder who that may be. If I could borrow from another show, that would be Danny Tanner (Bob Saget). Both characters are super pumped about the most random things (Leslie’s got her waffles, Danny’s going his house cleaning). They both seem progressive yet traditional in all the same ways and are passionate about their careers.

Joey (Matt LeBlanc) and Annie (Allison Brie) are both super sweet characters who never really found the one. Sure Joey dated around a bit, but never anything long-term where we could root for him. Annie had her relationships as well, but nothing was a great fit. Joey’s a little too lax and Annie’s a little obsessed with perfection so they would balance each other out. They are both kind, eternal optimists and would make a great couple.

How perfect would this be?! Samantha (Kim Cattrall) and Barney (Neil Patrick Harris) were both major players in their respective shows. They had all the tips and tricks for their friends when it came to sex and relationships but never wanted to settle down themselves. It would be adorable to see the two players tame each other and live happily ever after.

I know Poussey (Samira Wiley) is in prison and Emily (Shay Mitchell) is barely out of high school but humor me here. They are in very different circumstances but have some similar qualities. (Plus Emily was in prison once guys, remember?) They are both kind people with big hearts. They both have been known to pursue people who won’t return those feelings and get hurt. They also both had army-dads and would relate to some of the challenges associated with that. Sometimes when you match up two people who have been through a lot, you end up with a beautiful thing.

We’re still getting to know Dev (Aziz Ansari) but he might make a good match with Max (Kat Dennings.) Max is a hard-working, smart-mouthing waitress in New York and Dev is a fellow New Yorker trying to sort life out as a 30-something actor. Neither have had the best luck in relationships but cling to their amazing friendships to make life awesome. They’re both hilarious and laid back which would make for an awesome time together.

Erin (Ellie Kempar) and Morgan (Ike Barinholtz) are characters that both often took a back seat to their friends/coworkers’ lives. Morgan’s relationships never got serious and Erin’s were mostly weird. She makes a good pair with Pete but since Morgan still needs someone, screw Pete! They’re both a bit odd and slower than the others but in the cutest way possible. Their dates would be all kinds of awkward adorableness and who wouldn’t love that?

You can now check getting overly involved in TV characters’ lives to the point where you mash-up shows to help them find happiness of your to-do list. You’re welcome.

Featured Images via Full House and Parks and Recreation.