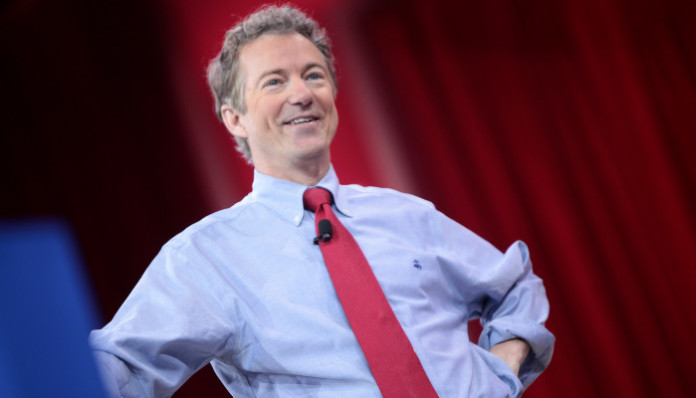 After Donald Trump’s most recent display of bravado this week, the Democrats followed up last night with a debate of their own. NBC News and YouTube welcomed Hillary Clinton, Bernie Sanders and Martin O’Malley (wait, who?) to the stage for nearly three hours of useless banter.

Maybe, we’re just hearing too much about the candidates these days, but I personally was bored to tears an hour into the debate, tired of hearing Hillary yell at Bernie, Bernie yell at Hillary and no one yell at Martin O’Malley.

Republican candidate and 90’s Justin Timberlake impersonator Rand Paul, however, stole the show with his minute-by-minute commentary of the debate proceedings. His tweets ranged from serious critiques of his opponents statements to straight up sassy attacks on Democratic candidates. And the Internet loved every minute of it.

In case you missed it, we’ve narrowed down Paul’s tweets to our top 10 favorites to liven up your Monday morning.

Are they going to ask the Democrats tons of questions about Donald Trump or is that just for us? #DemDebate

Hey, at least he’s willing to call out problems between both parties’ debates.

.@MartinOmalley is seriously happy about his plan to ruin our economy, I'll give him that #DemDebate

Though O’Malley is a relative unknown, Paul still took fire…even if it is a backhanded compliment.

.@BernieSanders just bragged about getting a D- grade. And he wants to fix education. #DemDebate

Right there with you, Bernie.

At least he gets that anyone who watched the debate probably made it into a drinking game. It’s a long weekend!

Help the candidate who can beat anyone on this stage, DONATE to my campaign tonight! https://t.co/78WPMcbQwP

A tweet-storm would be nothing without a shameless plug.

First Commercial break. Maybe I should have skipped the #DemDebate too? https://t.co/59z2nWp0L3

I want to hear @MartinOmalley weigh in again, he seems less angry than @HillaryClinton and @BernieSanders #DemDebate

Anyone else think that #DemDebate halftime show needed a band?

Anything to liven up the last three hours.

I think I heard @berniesanders say, loudly, "THE DEBATE IS OVER" so goodnight everyone! #DemDebate

Even Bernie didn’t want to be there!

Say what you want about Paul’s shot at winning the Republican nominee, but he was the real winner of tonight’s debate. Hey, maybe if this whole Presidential run doesn’t work out, he should consider a future in comedy.

What Most People Don’t Understand About Writers

5 Black LGBTQ+ Memoirs You Should Add To Your Reading List