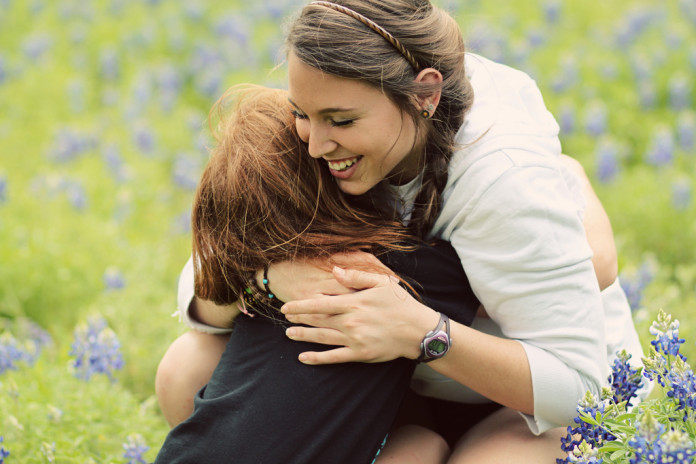 My sister is pretty much my opposite in every way. While I’m a self-proclaimed morning person, she’d rather sleep until 2pm. I’m the classic type-A-control-freak but she’s all laid-back and chill AF. I could never rock her edgy-slightly-hipster style (complete with nose piercing), and she would die if she had to wear anything out of my navy-and-pastels wardrobe. We’re only two years apart and basically best friends but don’t let our cute sibling Instagrams fool you: having a sister is actually the worst.

First of all, sisters know how to push all your buttons. Growing up, they knew just what to say or do to put you right over the edge. They can do it better than anyone else can because they know you so well. They probably know you better than you know yourself. Which is also annoying because you can never fake anything around them. Sisters always know if you’re mad or upset about something, no matter how hard you try to pretend otherwise. Plus they’re the ones to call you out on it until you fess up. Might as well be honest with her right from the start.

And the honesty thing goes both ways. Because you know your sister will always be honest with you, even if you don’t want to hear it. She’ll be the first to say that she hates that dress because it makes your boobs look small or that your boyfriend is kind of a douchebag. And worst part is that she’s always right. Then, after you return the dress and dump your boyfriend, you realize that you want her opinion on everything because it’s the only one that really matters.

That’s just one of the ways she challenges you. She’ll call you on your sh*t if she knows you’re lying or question your decision about something if she doesn’t agree with it. It’s not that she’s judgmental; your sister just wants what’s best for you so she’s going to ask you the hard questions. And while sometimes you wish she would just get off your back and let you live, you find yourself reconsidering what you thought or did, secretly tucking her advice away for the future.

And probably the number one reason sisters are the absolute worst is the fact that you can’t imagine life without her. She’s the best friend you’ll ever have and no one else will ever be able to compare. She’s the worst because you love her to death and would do absolutely anything for her. Even if you fight or get on each other’s nerves, you know that she’ll always have your back, too. No love can ever come close to that between sisters.

Seriously, my sister, Krista, is my best friend. But trust me, she’s also the worst thing that’s ever happened to me. ♥

4 Ways To Stop Constantly Comparing Yourself To Others