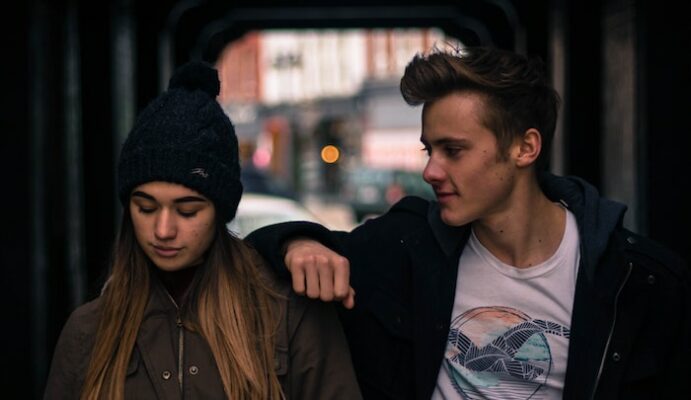 Loving a narcissist is an almost-relationship.

Judge me if you will, but I liked him, despite his avowed player-ness and he liked me — or at least liked me enough to suggest I was a woman nonpareil, the kind of female he’d marry if I were more available and if he was more open to the idea.

We flirted for months, kissed in secret, stole away for little bits of time. I fell for him — hard.

Three years later, I still have it bad. He’s not geographically available, I’m not technically available, and even if he was and I was, I have a suspicion (based on bald-faced facts) we wouldn’t be that much more official.

He might call me a girlfriend, but I’ve known him long enough to know that even the ones he does give the moniker aren’t exactly his one-and-onlies.

But, yeah, he has more options than me. And his behavior toward me, it goes hot and cold. We email — sometimes frequently, sometimes barely. I’ve pulled away, he’s gone away. We wind up talking again, and every time, I think he’s come to see me as important and worth treating with proper attention and care.

Every time (and I know it’s my fault in a way for believing it wouldn’t happen) I’m left feeling like he’s utterly indifferent to me. (Even if he says otherwise.)

I began to wonder recently if he’s one of the narcissists I’ve read about. There are more than a handful of Instagram accounts (and websites and articles) devoted to the type: they lovebomb you with their interest, their affection, their proclamations that you’re like no one else.

They may, in ways, triangulate (i.e., tell you about the other people they’re involved with or have been, making you think you get them in ways those others don’t). They make you feel crazy, wondering if you did something to upset them. And they discard you. Some of them badmouth you, gaslight you, insult you, abuse you.

I had — still have — a hard time pinning my guy down.

He shared a lot of narcissistic traits and I often feel pretty bad, but I can’t say he really was cruel to me in any outright way. And we never had a real relationship, so was it fair for me to get upset when he grew cold or uncommunicative?

Was it the same as being a discard? After all, he still tells me how much he respects and admires me, wants my friendship, and acknowledges that beneath that friendship is an attraction and connection that won’t die, even if we don’t act on it the few times a year we see each other for a few hours.

No, he’s not a narcissist… I think. Just a bad communicator, like he says. But I’m not a bad communicator. I might not lay it all out, but he’s a smart man and I know he must know that I harbor feelings and hope and plenty of hurt.

He knows I’ve practically shut the door on him many times because hope hurts. Even if I go silent, he eventually returns. But I know — and he knows — that he doesn’t care the way I do. So why can’t/won’t he just let me go?

So, I turn back to the narcissist label.

Narcissists have this in common: they each require a supply. It comes in different forms but narcissists love attention, both positive and negative. For many of them, a supply takes the form of an adoring person on whom they can rely to simply keep wanting them. (And yes, narcissists often ask to stay friends with exes.)

But then I go through the checklists and wonder, is he really a narcissist?

Recently, I figured out the truth about how I stay trapped in my infatuation. Anytime I go into a tailspin, I think it’s with two disparate hopes.

One, that he’ll say, “Look, it’s not like that for me. We’re never going to happen and not just because of our situation. We have to cut each other loose.” Or, two, that he’ll reassure me in some way that buoys my heart.

And when I write him, prodding in a way for him to shut the door for good, it’s always with the knowledge that he will reassure me, to keep me around for another day.

There it is, by the way, the reason you’re reading: The person you love (or think you love) is a narcissist if you know you can reach out — in anger, confusion, sadness, whatever — and know they will somehow say, “No baby, that’s not it at all.”

You can and should read about the other signs; it might help. But if time and again, you feel lousy and forgotten and, time and again, you know you can be told that’s not the case at all, they are a narcissist. Maybe not the outright worst of the bunch, but torturing you in a way all the same.

I realize this is a cruelty made worse because it makes you feel like you’re in the wrong. It makes you think, “I shouldn’t have even asked. I’m wasting their time. I’m acting needy. I’m doubting their affection.”

But sorry (and I say this to myself, too): doubting is natural in plenty of healthy relationships but if it’s a theme in yours, you’re not with the right person. No one should keep you wondering if you’re worth the effort.

So if you reach out and they say, “Oh, baby, you know how much you mean to me” (in whatever terms suit them) and you buy it, and if a few weeks or months later, you’re again noticing they’re barely in your life enough to know what you do each day, or even each week, each month, you have to ask yourself, “Am I enjoying this?”

Stop believing in them on the off-chance that it’s as real for them as it is for you, no matter what they say. If you feel unloved and unvalued, stop thinking, “He does like me, he does value me, what if I’m wrong about him and he does care about me the most and those magical first blushes of love and romance were all true?”

Stop reaching out knowing he’ll make you feel it again. It’s a drug and you’re looking for a fix.

When you’re down low in despair and know you can get the hit that gives you a high, you’re in love with a narcissist.

Maybe they sound nice and they say all the right things and tell you you’re still special even as you wonder how many other people they say it to. It’s not his fault he’s like this, you think. He’s hardly a monster. But it feels monstrous.

The only way to end the cycle, I’m afraid, is to go no contact. Cease all communication. Block them on social media. Change your email address or your phone number. Avoid places where you might bump into them. And don’t reach out for the hit of reassurance you know they can offer.

Or, you can weather the storm of their whether-ness, and cling tight to all those fragile what-ifs, and get drunk on the trickles of the attention they do give, and be hungover when there’s nothing left to drink.

I apologize for mixing substance metaphors, but it’s important I get through to you, whatever your potion.

So, last time: if you find yourself going around to the back of the bar to tap them on the shoulder and say, hey, bartender, do you have anything left for me to sip because you know they’ll manage to at least pour you a shot…

Well, you’ve got a drinking problem and a glass permanently half-empty. Cut them loose if you ever want to feel free again. Find a bar where you’re the only customer and a bartender who’s happiest serving only you. Get drunk on real love.

Photo by Trinity Kubassek from Pexels

4 Reasons You Should Always Fight For Your Career