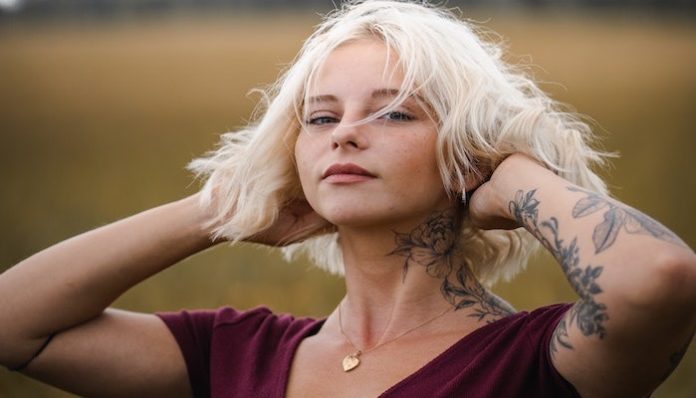 My body was on loan from God, much like a leased car. And like a leased car, use of it came with a lot of rules and restrictions that I had to adhere to lest there be a hefty penalty to pay down the road. There were rules about what I could eat and drink, how I could dress and accessorize, how I should present myself, what activities I could engage in, when and how I could enjoy intimacy, and on and on.

But that’s not all.

Around the time puberty was supposed to hit, I was taught by the Mormon religion to make decisions about my body with my future husband in mind.

I was told to preserve my purity for him, to ask myself before crossing a line if my future husband would want a woman who had done such a thing, to imagine what it would be like to one day confess my sins to him, hoping he would want me anyway.

When I was 19, I removed five earrings and a curved bar in my navel because according to my church, they were unbecoming of a woman of God.

Apparently 19-year-old women were mature enough to be trusted with marriage and motherhood but couldn’t bear the weight of responsibility that came with choosing to put a few tiny holes in their flesh. I’d fought and begged for some of those earrings — because my body belonged to my parents, too — so when the directive came down regarding them, I was reluctant to comply, to eradicate that bit of hard-won bodily autonomy, but I lacked the sense of self-possession to understand why.

Even outside of the religious context, I was very aware that as a female, my body was public domain. Opinions on it abounded. It seemed that one of my primary responsibilities was to present myself in a way that made other people comfortable at all times. Never too skinny, never too fat, never too prudish, never too exposed, never too trendy, never too old-fashioned, never too gaudy, never too plain. If someone offered feedback, I was expected to take it seriously and accommodate them. It didn’t matter if I disagreed. These people had to look at me.

That is how I gave up my power.

It started when I shaved my head. I did it for charity, but the kindness was ultimately to myself. It was liberation. Out in public, people were visibly uncomfortable when they looked at me. I could see the questions in their eyes. For some reason, maybe because I was already exhausted with all of the explaining involved in ending my marriage, I decided I did not owe them an explanation. They could think what they wanted. They could be uncomfortable. And they didn’t have to look at me.

From there, it was baby steps.

Pretty underwear. A tank top. Tight jeans. It felt like empowerment and scandal, wearing things I hadn’t in ages, things I’d been told not to. I delighted in showing skin I’d been covering for a third of my life, realizing that it held no damning power.

Then I went dancing and moved my body in ways that had always been forbidden. I got sweaty and tired and sore, absorbed in the music and the physical release.

I kissed a stranger, for no reason other than I wanted to — and though I’d expected to, I felt no guilt.

So I kissed another one. And then a few more. When I was ready, I went all the way.

Unsurprisingly, that step was not simple. Some part of me still didn’t know if my own permission was enough. I’d spent so long deferring decisions about my body to somebody else, I didn’t feel like I could make them on my own. I turned to friends and support groups, looking for someone to say it was fine, but they all said the same thing: It’s your choice.

I chose to proceed. As my partners asked, “Can I…” and “Is this okay…” I was taken aback. They didn’t just want compliance, they wanted consent. It was my choice. As they continually and consistently sought out my yes, I became aware of all the times in my life I wasn’t allowed a no.

Over the next couple of years, I systematically broke nearly every rule about my body that someone else had made on my behalf.

I drank wine and I slept naked. I threw away my scale; if I was going to really own my body, I had to make peace with it.

I vowed to never again promise someone thinness or prettiness, to stop feeling as if I wasn’t eligible for acceptance any other way. I committed to learn not to starve myself in order to gain a sense of control over what happened to me. My body was not going to be a battleground. I allowed myself to eat well, and sometimes, to eat terribly.

Also, I bought clothes I liked and refused to wear anything that felt like concession: no more sleeves in the swelter of summer, no more layers designed to shroud my body in shame. I kept my hair short, I dyed it dark and teal and purple, and I perfected a sultry smoky eye.

Oh, and I wore no makeup. I went hiking and to bars, concerts, and movies — alone. Sometimes I dated… and other times I made it a point not to. I said yes and I said no, over and over and over, whenever I wanted to, until it came as easily to me as breathing.

It was a complicated process, learning to be in charge of myself in this way. There was indoctrination to undo, there was past trauma to heal, there were boundaries to create. I gave myself permission to answer to no one, permission to ignore any input I hadn’t asked for, and permission to screw up gloriously. From that point forward, I was the only one who could decide what was healthy and appropriate for me.

I commemorated this shift by doing something I’d wanted to do for 15 years, but believed I wasn’t allowed to: I got a tattoo … and before I did, I didn’t ask anyone if it was okay.

When it was finished, I looked down at my shoulder. I couldn’t stop staring at it. The pigment glistened a deep black, the skin barely swollen and tender. It was just a tattoo — some artfully injected ink  —but it symbolized so much more. It was proof — hard evidence that at long last, the only person who had any say over my body was me. For the rest of my life, it was my choice.

Photo by Dave Goudreau on Unsplash

8 Simple Things All Guys Need To Understand About Flirting