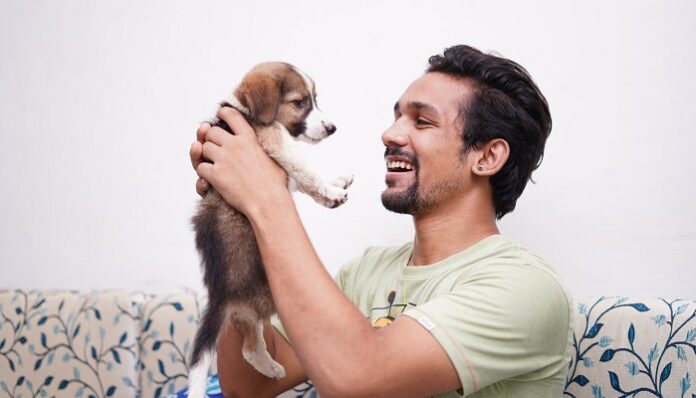 Most of us take relationship advice with a grain of salt, but one thing we can agree on is that you can’t change a man, especially when trying to learn how to save a relationship. But if you want a man who “behaves,” according to life coach Sloan Sheridan-Williams, women should train men like a puppy.

Now, before you get offended, of course you shouldn’t actually treat a man like an animal (that would be quite demeaning)! But as crazy as it sounds, changing your behavior to train your man the way you would a puppy might actually improve your relationship.

Here are four dog-training techniques you can also apply to your man.

1. Give your man a long leash.

When you pull the leash too tight on your man (i.e., don’t allow him to have new hobbies, are suspicious of his new friends, or constantly demand to know where he is all the time), you may actually cause him to work harder to pull away from you. Why? Because he feels overcrowded without enough to burn off his energy.

Like dogs, men are full of energy. So if they feel under-stimulated, they act out at home while you are away or when they interact with other… you know, “puppy owners.”

The best way to ensure that your dog (and your man) comes back is to allow him a long leash. This will give your guy an opportunity to explore without feeling controlled. When it’s time to come back, begging or pleading won’t be necessary — he’ll happily return on his own.

2. Be brief and clear about what you want.

The best dog trainers know that you have to give short and uncomplicated commands to your dog so that they know exactly what you want. Now, you can’t exactly boss men around in the same way that you would your puppy, but the lesson to take from this is you want to communicate your needs and desires in the shortest and most straightforward way possible.

Women by nature are more discussion-oriented than men, so they would rather communicate through dialogue, discussions about their emotions, choices, and problems. However, doing that may only confuse men more without giving them clear instructions about what you want.

3. Don’t overdo it with the punishments.

Sheridan-Williams suggests that a puppy owner (i.e., girlfriend or spouse) should only reward good behavior, and ignore bad behavior.

Dogs live in the moment. Dogs react to situations. They do not think ahead or plan out bad deeds. Therefore, the type and intensity of the punishment must encourage the dog to listen — no more or no less. Anything more is overkill and will actually do more harm than good. On the other hand, if you do not punish your dog at all, he will never learn.

In relationships the same rule applies; when you punish your partner too severely or act like you don’t trust him, you inevitably push your partner away, or at the very least create complacency in him. Mention any bad behavior to your partner and communicate exactly why it bothers you. Then let it go.

4. Be consistent in your behavior.

When you treat your dog well, he will become very possessive. If you happen to stray from your routine of walking him, playing with him, feeding him regularly, he will begin to wonder if another dog is receiving the same wonderful treatment.

Men are the same way. If you suddenly stop being affectionate, caring, and nice to him, he may wonder if you are possibly seeing someone else or have just lost interest in him. Be consistent in your relationship behavior; though, you should also be flexible if circumstances change.

Whether you have a puppy or a boyfriend you’re frustrated with, hang in there and have patience. The love, joy and companionship between the two of you will far outweigh any problems you’re facing now trying to communicate and understand each other’s needs.

Photo by Yogendra Singh on Unsplash

6 Simple DIY Projects That Will Spice Up Your Home This...