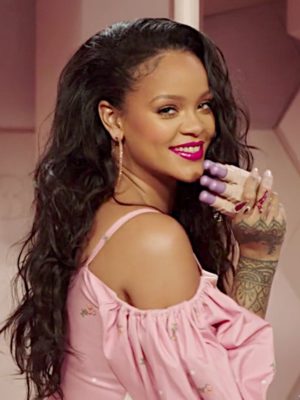 In the last three years, Rihanna has birthed a number of projects, but could a new child be up next? This singer and business mogul has already gifted society with her stellar makeup line, FentyBeauty, and an up-and-coming fashion line SAVAGEXFENTY. So she already has a lot going for her. Evidence proves, however, that a new baby could very well be on the way as well.

The singer attended her annual Diamond Ball last Thursday and baby speculations have been swirling after her performance and the interview that followed.

While giving an interview with Essence, she said the following:

Obviously, she could just have been making a general statement. Maybe she was referring to her future as a mother. Still, people are dedicated to the idea that she is, in fact, pregnant.

The “evidence” was also dissected even further online when clips of her outfit/body surfaced. Some fans felt that she looked bigger in the belly area. Whether she’s pregnant or not, this is rude to say and just plain mean. People are always going to express their opinions, though.

Other fans chimed in to dispel the rumors. They shared a video where she is seen taking a sip of wine. However, other fans argued that her mouth was closed or that it may not even be an alcoholic beverage.

So, is Rihanna pregnant or not?

Long story short: We still don’t know with certainty. She could be bloated, she could have chosen not to wear Spanx (like every celebrity does for every occasion), or maybe her body is just changing. She hasn’t confirmed or denied the rumors, but that still doesn’t mean we all should analyze her body’s shape. Just because an outfit fits her a certain way does not indicate that she’s pregnant.

At this point, the only “child” we can confirm she’s working on is her new album! The singer announced last week that she will not be performing at next year’s Super Bowl, as she still has to finish her album first. This, alone, sent fans into a craze. Did you know that  it’s been almost four years since we’ve heard new music from her?

So, maybe the pregnancy rumors are all just one big publicity stunt for the album. Or, maybe she’s actually expecting a child. Or, perhaps people pay way too much attention to every little thing celebrities do.

What’s your verdict on this story? Tell us your opinion in the comments!