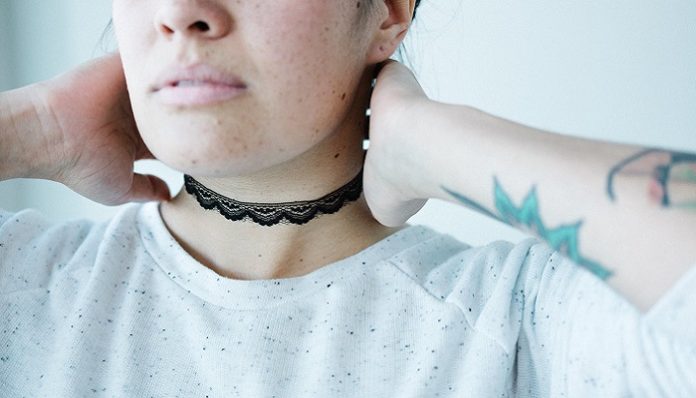 Remember the 90s, when black tattoo chokers were ~totally~ in? Everyone from Britney Spears to your next door neighbor wore one. It truly was a fashion staple and it seemed like no one left the house without this accessory. Fast forward to 2016, where chokers have made their debut again into the ever changing fashion world, and it seems as if this trend plans on staying for a while.

I absolutely love that chokers have made a comeback. I recently saw my best friend wearing a black and gold foil one from Topshop with her outfit. It was beautiful. I immediately fell in love and purchased the same exact ones she had and wore them with whatever outfits I could. I felt edgy, yet thought the gold foil and black design added a chic touch. This past year, the trend really took off again and I saw everyone wearing ones from the simple black velvet ones to more intricate ones with jewels or tiny pendants.

The return of the choker is back and I personally am thrilled. I knew I couldn’t be the only one ecstatic about this return, so I asked a bunch of millennials, guys and girls, what they really thought of it.

Here’s what the girls thought:

“I wore them when I was younger, and love that they have so many different styles now. They make any simple look, bold and pop.” – Amira, 21

“I always think it’s so cool when old trends come back and you can look through your closet and find something you used to wear when you were younger. Also, it’s super simple, but brings a lot of outfits together!” – Julia, 20

“I’m a big fan of chokers and think they are adorable when done right! Especially ones with stones or beads. They definitely aren’t for every outfit though.” – Sarah, 21

“I think that a few people can pull it off and make it look stylish and chic, but for the most part it’s a no from me. The trend is so overblown in my opinion, and I’m tired of seeing it everywhere and on everyone.” – Anita, 21

“I don’t like it .To me, it’s one of the trends that should have stayed in the past. Always bringing up trends from the past just proves we’re unable to come up with anything new and different.” – Mara, 20

As for the guys:

“Some girls can pull it off, but I’m not a fan of girls who wear it everyday…once in a while is alright.” – Tyler, 22

“I haven’t seen anybody wearing them, but from the pictures I have seen online I think they are kind of too intense…” – Liam, 21

“I hate it! I just think it looks very uncomfortable for girls.” – Elio, 21

“I don’t have any strong feelings one way or another. If you like wearing them, wear them. If you don’t, then don’t. It won’t affect my perception of anyone.” – Tom, 21

There you have it! Most girls totally love this returning trend, but others have a lot of mixed emotions. Some even think it’s a total flop. As for the guys, they either completely dislike it or are pretty neutral. Whatever you think about this trend, I only know one thing for sure: the return of the choker doesn’t seem to be going out of style any time soon.

Featured image via Burst on Pexels

Keep Calm: 5 Ways To Make Peace With Getting Older

NYC: A Late Night Guide To The City That Never Sleeps