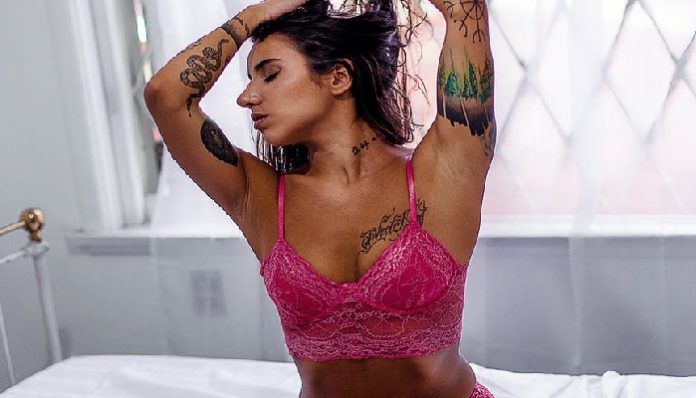 We’ll get straight to the point, ladies. Guys like us in our underwear. This isn’t news to anyone. When you’re trying to be sexy for your boo, are you going to show up in a mumu or next to nothing? You know the answer to that, I’m not going to bother elaborating.

Every guy has different opinions on what they like their ladies to wear to bed. And sometimes, it might surprise you. I went lingerie shopping with a girlfriend before Valentine’s Day, and she told me that her very tame, seemingly vanilla husband, liked leather and fringe. It shocked me, but hey, everyone likes what they like and I totally respect that.

The whole experience got me curious. There is always going to be that guy who likes something totally out of the box. He’ll ask you to wear a floor length nightgown because that’s what he finds sexy but I wanted to know what the general consensus of males aged 18-25 was, on what their preferred flavor of lingerie is.

I gave them 4 options, and 4 colors, and then asked their ages.

Only 1 guy, aged 24, said that he preferred garter belts with thigh highs, specifically in red.

The majority, (7 guys) said they preferred just a bra and panties. And each one of them, with the exception of the 23-year-old who said he likes pink, agreed that black was the best color.

Honestly, I was surprised by these answers. When I imagine being really sexy, and when I think of lingerie, my mind goes to garter belts, thigh highs, corsets, and fuzzy handcuffs. So, it really came as a shock, that I’ve totally missed the mark! It looks like I need to completely revamp my lingerie collection.

My husband was one of the guys that I asked this question to, and even though I thought I had a pretty good idea of what he liked, since I am married to him, his answer also blew my mind. He told me that he prefers nighties or babydolls the most. When I pried a little more, he admitted that the babydoll he had in mind as his favorite was the one that I wore on our wedding day, but that if he really thinks about it, he prefers a sexy bra and panty set.

Here I am, with a drawer full of nighties, corsets, and garter belts, and all my husband wants from me is what I wear everyday under my clothes.

On the one hand, this will make my lingerie shopping escapades much cheaper, and my wallet (my husband’s wallet) will remain fuller. On the other hand, I honestly feel sexier in full-on lingerie than a simple bra and panty.

I guess, in the end, what really matters is that you feel confident standing in front of your boo thang in whatever YOU want, and that it’ll make you feel sexy. Because if you’re not confident in what you’re wearing, it doesn’t matter whether or not it’s the sexiest outfit you’ve ever worn, it won’t help you seduce anyone. So, while I think it’s important to know what guys like, since half of the reason I wear lingerie is for him, I think it’s equally as important to wear whatever makes you feel sexy.