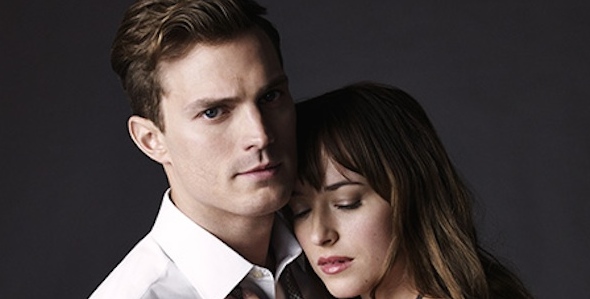 I have two major issues with Fifty Shades of Grey and don’t know if they can be resolved in the film adaptation. Surprisingly, neither of them has to do with the overt sexual content. It always surprises me that sex is handled with two extremes. It is either bad, evil, and should be hidden. Or it is beyond great, euphoric, and should be everywhere. One of the best explanations I’ve found of this phenomenon comes from the interesting indie flick Daydream Nation:

“You’ve been brainwashed by puritanical a**holes who think sex is a sin. But then again, your little gerbil-sized brain has been reprogrammed by the media to believe that sex is the be-all, end-all. So now you’re stuck, right? ‘Cause on the one hand you love to f**k, but afterwards you feel overwhelmed by guilt & you’re not sure why. Maybe it’s because sex is neither as good or as evil as you’ve built it up to be.”

Sex is neither as good or as evil as we have built it up to be. Nearly all of us have sex. It is a thing we do. It feels good. Then we move on in our lives and cook and clean and work and raise children or write blogs.

Writing about sex is not new. As an English major, I would like to say my research for this article was more steamy than I’m used to, but sex permeates literature of all time periods. Sex is a part of our lives, so it makes sense that sex is a part of our culture. Why must this one common facet of human life be left out of literature? I read books containing drug use and don’t scurry over to the nearest street corner to buy crack. Just because I read a book that has alternative sexual behaviors, does not mean I must engage in bondage with a rich, powerful CEO named Christian Grey.

My two problems with Fifty Shades go beyond the sex.

1. Is this actually a book? A book people read?

Anybody else who has read the book now knows that my poor eyes have viewed the phrases “yes, sir,” “holy crap,” “my inner goddess,” and “stop biting your lip” approximately 52,384 times. Or was it 52,385? I don’t know. It was hard to keep track. The author of this wild hit managed to create all this fuss and STILL regurgitate the same phrases throughout twenty-six chapters. It is stunning, truly, just how often “holy cow” can be used in and outside of the bedroom.

I am saddened that a poorly written book with immature character development and little description (beyond the size of Christian Grey’s…bank account) has stayed on top of charts for so long. Sex is beautiful and it can be written about beautifully. This is not beautiful, it’s inadequate.

2. I personally cannot and will not accept man’s domination of women.

Anastasia Steele and I have much in common: we are English majors, we love the Pacific Northwest, and we are quite skeptical of domination. Sorrowfully, we must separate over the mere fact that a man ordering my meal and demanding that I eat all of it is a deal breaker for me. As is stalking. Christian Grey’s domination over Anastasia Steele OUTSIDE of the bedroom, or “The Red Room of Pain,” leaves my stomach in knots:

Christian is still nowhere to be seen, and Mrs. Jones is checking the contents of the pantry.

“Please.” I smile at her. I feel slightly more confident now that I’m dressed.

“Of course you’ll have something to eat,” Christian snaps, glowering. “She likes pancakes, bacon, and eggs, Mrs. Jones.”

“Omelet, please, and some fruit.” He doesn’t take his eyes off me, his expression unfathomable. “Sit,” he orders, pointing to one of the barstools. (1)

“How did you feel while I was hitting you and after?”

My question surprises him.

“You really want to know?”

“Oh, trust me, I’m fascinated.” And I can’t quite keep the sarcasm out of my voice.

He narrows his eyes again.

I blanch. “Are you going to hit me again?”

Phew … my subconscious and I both breathe a silent sigh of relief.

“I like the control it gives me, Anastasia. I want you to behave in a particular way, and if you don’t, I shall punish you, and you will learn to behave the way I desire. I enjoy punishing you.” (2)

This dialogue does not turn me on – it makes me angry. I’m not talking about a spank on the butt during a rowdy sex session or fuzzy handcuffs. I’m talking about Mr. Grey’s loves: flogging, caning, painful beating. Men still punish women all over this globe. And the whole damaged man storyline is a sad attempt to turn Christian Grey into a hero, and Anastasia Steele into his dutiful caretaker who nurses him back to humanity. This is not a novel concept, it is a common one, especially in abusive/codependent relationships.

I realize this is fiction. Just as I mentioned before, I don’t need to become a crack addict after reading a book about crack. Likewise, if women enjoy this book, I know it does not mean they support abuse. Equality has allowed women sexual freedom as well. I could almost go as far as saying that part of me is happy the economy is being boosted by the sale of sexual product marketed toward women for a change. But I can’t quite say that. Why? Because an impressionable, young, pretty virgin is seduced by a powerful, sadistic man who likes to use her inside and outside of the bedroom for his pleasure. Sounds to me like a typical fantasy geared toward men.

Fifty Shades of Grey didn’t do it for me. It was not sexually stimulating and certainly not mentally stimulating. With an abundance of literature at my fingertips, I would rather spend my time reading something well-written and creative. Some story in which beautiful love and wild sex is mutually respectful and beneficial. Some story in which a woman is strong, interesting, sexual and not swayed by the obsessive desires of man. I’ve heard that story too many times and have seen it in the lives of too many women. It’s old news.