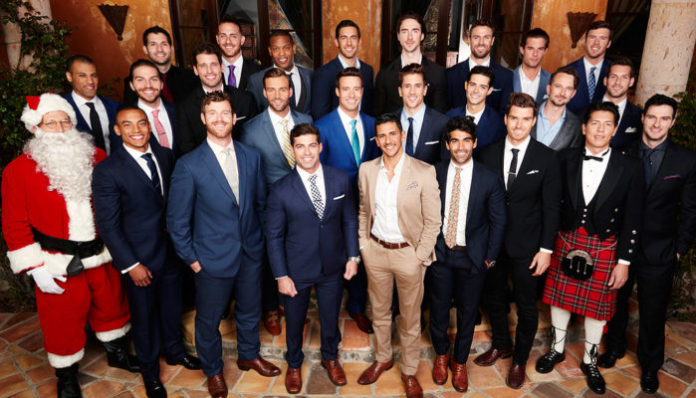 Our long national nightmare is over and the Bachelorette family is once more a fixture in our lives. While tonight’s premiere had a clearly compelling theme of JoJo’s quest for love, she didn’t fail to mention the word ‘love’ about a billion times in her opening remarks. We get it girl, you love love.

The former Bachelorettes all gathering together to help calm JoJo’s nerves was cute but Kaitlyn needs to chill. Your season’s over, let it go. If JoJo really wants some advice worth her time, she’ll schmooze her little ass over to Benny boo and ask him what we’re all really dying to hear. How does it feel to ask someone to marry you 24 hours after telling someone else you loved them? You know, cause I’m hot shit now and I may find myself in that situation with this lineup of guys *way hotter than you* chasing me.

While the rest of Bachelor Nation is eagerly sitting around their TV’s watching JoJo’s every move and listening to her and her contestant’s every word, I’m sitting here f*cking writing this shit with my homegirls wondering why the actual f*ck am I doing this again? Kids, that’s what we call setting yourself up for failure, or disappointment, or possibly definitely both.

For all you newcomers, get ready for a ride. The Bachelorette is just like The Bachelor but with way more sports metaphors. Right off the bat we see a quite diverse array of male eye candy gracing us with their presence. Everything from nerds, to mythical characters, to “hipsters”, to incredibly hot football players stuck in the shadows of their older brothers (no not Eli and Peyton Manning…too soon?). To get you up to speed with this season’s lucky lads, we’ve brutally ranked JoJo’s contestant from eh, you’ll do to oh honey, you’re kind of pathetic.

AKA THE FOOTBALL STAR

Josh Murray 2.0. To a tee. Brother of famous football player. He’s gonna go reeeeeal far. Top 4 for sure. First REAL kiss of the season. Ass of steel. Best thing about Jordan? His brother. Worst thing? He’s not his brother.

This guy has a Wentworth Miller vibe and I dig it. But terrible pun alert: “I hope JoJo’s the one who lights my fire.” He may have lost me with that one.

AKA THE COUNTRY BOY

Swoon. War vet. I’m calling Top 4. AND HE CAME IN ON A UNICORN?! Soul mates. JoJo’s in love already…and so are we.

Brought the acapella group, all the guys are threatened already. It’s gonna be super awkward when the guys are serenading them in the fantasy suite.

Hot marine but all the guys make fun of how short he is…well, we have to admit…he is pretty short. Even JoJo wouldn’t sit all the way on him when he tried to do push ups with her on his back. If it were me, I’d be afraid of snapping him in half as well, little one.

AKA THE BUFF TECHIE

His sad story is a racist father. Came in on a motorcycle. Plays the “bad boy”…we hate him already.

AKA THE FORMER PASTOR/CURRENT PENIS FIXER

Says he pumps them up and gets them excited. You can’t make this shit up. “Hard” business, “draining.” Penis innuendos galore. Also, creepy pedophile mustache. EW can’t believe JoJo gave him a rose. May we all pray on the sole fact that Olivia go the first impression rose last season, and well, she was left crying on an island. #CastAwayPartII

Tried to be cute and funny, failed miserably. Got the first kiss by playing a game and JoJo would clearly rather be getting a bikini wax than kissing him.

AKA THE FORMER COMPETITIVE SWIMMER

A man who has lived more of his life in a Speedo than Michael Phelps. Oh, and apparently he likes to eat flowers…? Andddddd this little bikini boy claims he is a hopeless romantic, aren’t you all.

Probs not a great start with having the same name as JoJo’s ex (Chad Bro Chad). So awkward I wanted to stab my eyes out. Clearly not a talker. And is really disappointed in the quality of his competitors. F*cking f*ck, WHAT ARE YOU DOING HERE?!

AKA THE KILT GUY

Sad day for Canadians. Scottish below the waist…yikes.

AKA THE BUSINESS OWNER

He owns a boxing club and he is a bible thumper. Oh and currently he’s lazering off all his tattoos, which if you ask me that screams he’s a quitter.

Clearly just here to gain exposure for his music.

Santa got bored on his vacay. The guys that are here for the “right reasons” are mad he’s not taking this seriously.

AKA THE BACHELOR SUPERFAN

Ewwwwwwwwwwww. Just feel uncomfortable. Don’t think he’s here for the “right reasons.” I mean, Superfan? DOES HE HAVE A MINOR IN STALKING AS WELL?

Vinny is a profesh DJ…aka DJ Vinsane. And he’s a barber, just look at how perfectly straight his hairline is. How he’s still single, the world may never know. *eye roll*

Super cute. Prince Ali Aladdin. Not much else to this one yet ~mysterious~.

How you can professionally be a hipster? Because I have no f*cking idea. I just image him wearing skinny jeans chilling in his local Starbucks trying every item on and off the menu while viciously ranting about each item in a stupid pointless review being a snob and some shit like that. He even looks like your typical Brandon, what the hell is up with that?

Dammmmn Daniel, you’re a mess. His job is being Canadian. First impression was *cringe*. Had to fast forward through all of him. The belly button pusher. He’s shamed an entire nation tonight.

Returns for fake out and literally no one cares. What was the point of this mini heart attack again? You likely made at least 3 men pee their pants tonight, and all to awkwardly tell JoJo good luck? Hey family friend, you couldn’t have done this ya know…over coffee, a few months back? F*CKING NOPE, had to be right before the first rose was given out. ABC, f*ck you.

Now what did we take away from last night’s episode of The Bachelorette? There’s a whole lotta mediocre and two unicorns. JoJo’s voice kind of reminds me of someone who still has their braces on, and she touches her hair far more than any sanitary person should, but hey…she’s stunning and the most down-to-earth Bachelorette we’ve seen yet. Hopefully they all get continuously wasted throughout the season and fight each other to keep us entertained until she has to choose between Jordan and Luke. Fight to the death? Eh, that may be a little violent…f*ck it. I’m #TeamJordan and if you aren’t, then you’re every shade of wrong.

JoJo better work her way through these men like A$AP (ROCKY), because this shit is exhausting and mama needs a drink. Woof. In the wise words of Sir-Mix-a-Lot…”they only talk to her because she looks like a total prostitute.” Too far?

This season I’m looking forward to the lies, backst(abs), and guy on guy DRAMAAAAAAAA, as are the all of you so don’t you dare judge me. Scroll down to take a poll on what team you would pick if there ever was a fight to the death between Jordan and Luke.

Check back next week for the recap of the next episode! The Bachelorette airs Monday (8 p.m. ET) on ABC.

5 Life Lessons I’ve Learned From Being A Dad To 3-Month...

3 Steps To Finding Your Motivation Again