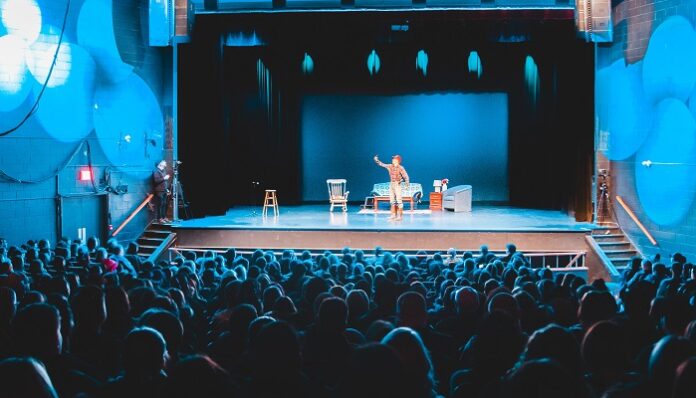 To kick off the beginning of 2023, I decided to challenge myself by pulling an all-nighter and writing a 10-minute script in less than 24 hours, despite having no previous script writing experience. You might be wondering how I found myself in these circumstances.

A local theatre in Madison runs the Bartell Ball Drop Blitz every New Year’s Eve. There, writers, directors, and actors work on six different skits. They meet for the first time 24 hours before New Year’s Eve, which is when they must showcase their work on stage.

I was concerned about how it would go. I decided to end a three-year relationship with my boyfriend 24 hours prior to my all-nighter. However, I didn’t get much chance to think about the breakup before we started drawing directors and actors from a hat. We all gathered around and I asked the actors about their previous experience, skills they could bring, etc. I noticed all of them had experience doing comedic roles, which inspired me to build a script around those three characters participating in a comedic showdown.

I was grateful to have such contrasting actors to play the contestants.

Because we had an uneven amount of actors, one actor was in all six skits, but had small roles in each one. I made him the host with the intention that he would win the competition where the actors would make jokes such as “He always finds his way into everything.”

The actor with stand-up experience played a boomer comedian. The character did anti-jokes and had a harder time accepting comedy that wasn’t his own. I had worked with the second actor previously and knew was great at impressions, so I made him be a comedian that specializes in impressions. I would insert places for him to do impressions, which led him to our third actor.

This was a young LGBTQ actor who specifically requested a sarcastic, witty role similar to their last role, Wednesday Addams. I did the most work on that role because I didn’t want this role to be another cliche Gen Z stereotype that is often portrayed in modern media as unintelligent. I wanted them to be the one outsmarting the older comedians with their wit instead of constantly being the butt of the joke.

There was one conversation in particular where I had all the characters open up about their experiences of what led them into comedy.

We learned that the character who did impressions was insecure, which is why they used impressions of other people as entertainment.

The sarcastic character had issues with bullying, so they used sarcasm and wit as a barrier to defend themselves. The “boomer-humor” comedian character had a chance to open up, but instead made it a joke because, in my head writing the character, he didn’t feel comfortable opening up due to the culture he was raised in.

We had to choose a prop, and my director and I aimed for the guitar. As I am a musician myself, I wanted to make sure I incorporated my love of music into the script, so we had a segment where the cast had to do musical comedy. I made sure to put jokes in there that other musicians would be able to catch onto. One character in particular did an Elvis impression and the other two characters played a song called “If I Only Had  A Punchline,” which was parodying “If I Only Had a Brain” From The Wizard of Oz.

Although it does sound like everything just went together, I had some difficulty figuring out dialogue in the beginning. I knew with it being a comedy, there had to be non-stop laughter, so I constantly tried to picture how the characters would roast each other to help come up with a conversation.

I tried to put myself into the characters’ shoes and think about what that specific character would say. From there, it was almost like I was having the conversation myself.

The best part was eventually seeing how things hit the stage and hearing the audience’s reaction. Laughter filled the room and I realized I’m glad to kick off the new year by saying I tried something new. It’s funny how we always say we don’t have time to try a new skill because life gets in the way. However, you’d be surprised how much you can progress if you give yourself a few hours to try it.

Why We Need To Learn To Just Breathe