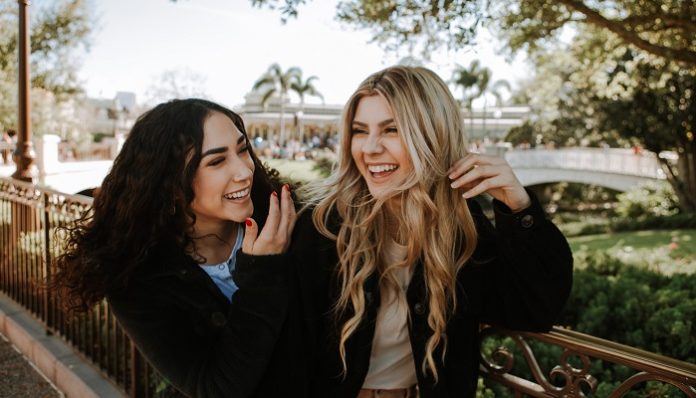 “Hey, I saw you in Capitola last summer,” I said to the girl standing closest to me in the pool. Although I spotted her as someone from school, I didn’t speak to her at the time. Junior high school social etiquette can be as strict as anything in Jane Austen’s time, and we’d never been properly introduced.

But now, feeling like a sausage stuffed in a black regulation bathing suit, and trying to not succumb to an anxiety attack, I was willing to break all the rules.

The girl, Lauren, confirmed that she was in the beach town about an hour away from where we lived. Without her knowing it, just talking to her calmed my anxiety. And from that initial meeting, a friendship that has lasted well into adulthood was born.

Lauren has been the biggest witness to my life, and me, hers. No one knows me better.

I’m closer to my best friend than my boyfriend of 15 years. Andrew and I might live together, but we’ll never have the same kind of history that Lauren and I have. There’s just something about someone who has seen you go through puberty that bonds you forever.

Lauren is the first person I call with any crisis or big news. During our friendship, we’ve shared our happiness, laughter, sadness, births, deaths, achievements, failures, and everything in between.

Andrew doesn’t know why just saying the words “jungle juice” will make Lauren and me erupt into laughter. Andrew wasn’t backstage that night of the junior high play. He didn’t unexplainably pretend to be drunk on that sickeningly sweet fruit punch. Nor was he there when Lauren and I found my dad passed out drunk in our driveway.

Lauren knew my dad well, as he often liked to discuss his worries about me with her — things like how I couldn’t type or that I ate too quickly. I don’t have to give her the backstory on most of the things that have happened in my life.

She knows that the driveway incident was a one-time occurrence and that he wasn’t an alcoholic, even though it appeared that way. The truth is that it’s a hard story to share, and I’m not certain if I could convey to Andrew the embarrassment I felt (and still feel) for my father.

My father died long before Andrew was in the picture, and there’s no way for Andrew to ever develop a real appreciation for him. We can never share my dad, my brother, or any of my friends who passed away.

Andrew isn’t comfortable when I show a lot of emotion. He doesn’t like to see me upset or crying. He feels powerless to do anything about it. My best friend knows to just let me feel what I’m feeling without judgment. And Andrew will never help me heal from a broken heart, especially if he’s the one who caused it.

There’s an expression that says “men will come and go, but you always have your girlfriends.” The quote should be “everyone needs at least one best friend to help you through the tough times.”

Lauren and I have been friends since we were 13. We’ve seen each other grow and change, yet we remain thoroughly ourselves. We don’t have to show a more positive version of who we are because we already know all the flaws, failures, and foolishness of our true selves.

When we met, I went by Chris. I didn’t become Christine until I was an adult.

A few years ago, Lauren friended a woman on Facebook whom I considered my worst high school enemy. I got very angry and acted as if Lauren had committed the most horrible betrayal. She unfriended the woman to appease me. I soon realized how incredibly foolish I was being, then friended the woman myself, and encouraged Lauren to re-friend her.

I admire Lauren for her beauty (even with the Barbra Streisand perm during our senior year), intelligence, talents, and parenting skills. She’s also more well-traveled than me and more sophisticated.

Once when I was in my early twenties, I visited Lauren in San Francisco and we went to the famous Zuni Cafe for dinner.

“What’s porcini?” I asked Lauren pointing to the menu, knowing that she had traveled in Italy extensively so she’d know.

I liked pork, so I ordered it. We were both surprised when I was served a huge mushroom that took up most of the plate. Lauren graciously traded her entree with me and ate her fungi with gusto.

When friends make a mistake, they own it, make amends, and the story goes into a history that binds them together.

In many ways, Andrew and I are as close as we can be. But he’ll never know my whole story, the one that Lauren knows, and honestly, that makes me a little sad. Andrew knows Christine, but he’ll never know goofy, stars-in-her-eyes Chris.

However misused the phrase “best friend forever” is, in our case, it’s true. From the pool to the grave, our friendship will be unwavering and emotionally sustained.