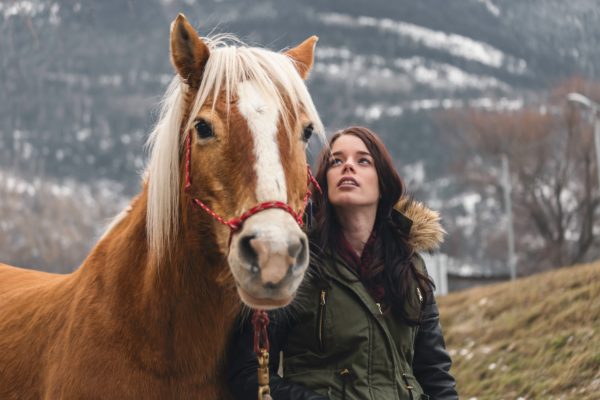 Unless you are an equestrian, horseback riding may seem like just one of many sports out there. But to me, it was  much more than a sport; It was my life. I began taking riding lessons as a young girl and rode competitively until I was 19 when a freak accident halted my riding career in its tracks. For 4 years, I fought an internal battle between fear and the urge to ride again. Ultimately, I chose to ride again, and I am so happy I did. Here are 6 things I learned from getting back in the saddle that could open your eyes to your own life even if you don’t ride horses:

Everyone deals with trauma differently.

When I got injured, I developed a fear of horses because I had never felt such intense, physical pain before that day. I had nightmares of the accident for months.  As I recovered, I still wasn’t ready to return to the barn, and that’s okay. Everyone processes trauma differently and heals at their own pace. Forcing yourself to do something you aren’t ready for could hurt you more than it helps you.

Life is too short to live with regrets.

If I had never decided to ride again, I would have regretted it. I  know I would have always had a tinge of doubt in my mind that I made the wrong decision, and wondered what could have been. Instead, I’ve opened the door to new opportunities where I can excel in the equestrian world. When the old version of me looks back on her life one day, she’ll be glad she pushed through the fear.

I didn’t realize how much I needed an outlet.

I love my job, but working full-time hours all week can be mentally and emotionally draining. Most days, I would work my 8 hour (or longer) shift, and come home and collapse on the couch until bedtime. Now, I wake up early in the morning to watch the sunrise as I ride. I’ve noticed on the days I begin with riding, I’m more productive and overall much happier. I had no idea how much I needed the outlet to relieve stress and let my daily anxieties wash away.

You can have more than one goal in life.

Since the accident, I told myself that it was too risky for me to start riding again. I had other goals that I wanted to pursue, such as advancing my career and eventually starting a family. I was scared that if I had another injury, all my other goals would be jeopardized. Through this journey, I’ve learned I can still achieve those goals, while also continuing to do what I love.

I learned to forgive.

It’s been said that forgiveness is the best thing you can do for yourself. For a long time, I blamed the horse for what happened to me. However, I now realize the horse didn’t mean for me to get hurt. It was simply a freak accident that was no one’s fault, and I’m happier since I’ve let go of this mindset.

Don’t let other people hold you back.

This is your life to live, and you have to do what you need in order to be happy. While it’s important to be kind to others and listen to what they have to say, you are in charge of deciding what is best for you. Many of my family members were nervous to hear I was riding again, but they are still supportive of my equestrian dreams because they know it makes me happy. If the people around you truly love you, they will support you in the pursuit of your dreams, too.

Ultimately, I learned it is never too late to follow, or return to, your dreams. For me, living a life unfulfilled is much scarier than the risks associated with doing what I love. So, whatever it is that you may be missing or hesitating on, I encourage you to get back in the saddle, whatever that might mean to you. It doesn’t matter if it’s been 4 months or 4 years like me; it’s never too late to rediscover what makes you happy.

What Veterans Day Means To Me As A United States Navy...