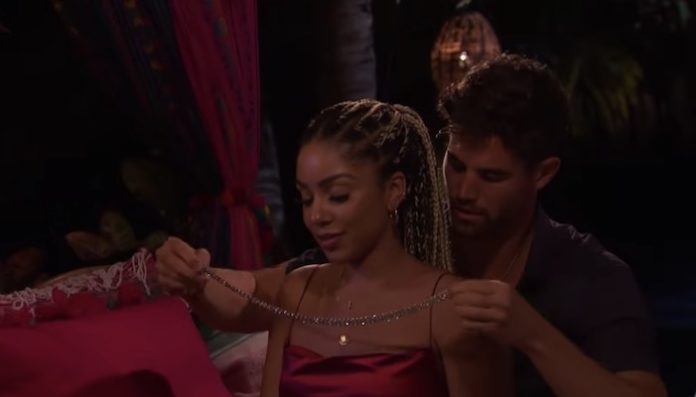 Tuesday’s episode of Bachelor In Paradise was far from boring! Once again, the drama continued and I’m hooked.

The episode started with Thomas and Aaron finishing their heated argument over Tammy. While Thomas didn’t seem to care for his enemy’s feelings, it’s clear Aaron was seriously hurt over Tammy’s actions. I don’t blame him, she did say he could trust her, and still shared a kiss with his nemesis. But, we also know that connections change quickly in paradise, so we can’t be too surprised over what Tammy did.

We then saw Chasen pull out a shiny Cuban chain for Deandra, a “grand gesture” that was clearly meant to one-up Karls gift.

All I can say is, Deandra was racking up the jewelry! Being mature, she returned the bracelet to Karl, and he handled the rejection surprisingly well. Karl wanted the best for her, and was supportive of Deandra’s decision. However, Karl was fuming over Chasen’s gesture and confronted him.

“When she figures you out, you guys will be done” he said to Chasen, and well – he wasn’t wrong. Throughout all this drama, Ivan was there to support Deandra, and I have to say I love these two as a couple.

In the mix of the jewelry brawl and the Tammy love triangle, Tre had a chat with Tahzjaun. He admits that he doesn’t see the two working out as a couple and packs his bags to go home. I respect Tre for leaving once he knew his time was up.

While couples were falling apart, Riley performed a song he’s been writing for Maurissa. They are moving fast and I love it! Riley seems genuine about his feelings for her, and Maurissa seemed to be truly moved by the song. I mean, who isn’t a sucker for songs? Maybe Karl and Chasen should take notes from Riley.

As the night progressed, Lance Bass interrupted the party to say goodbye and made a quick announcement. The first-ever Bachelorette in Paradise entered the show, and it was none other than Becca Kufrin! The boys who didn’t have a rose promise were relieved to see they may have a second shot.

Becca had conversations with everyone and began to decide who she’d be handing a rose to. However, throughout this Tahzjaun was packing her bags, and made a swift exit into the limo. It’s too bad paradise didn’t work out for her and Tre. They had a strong start but it just dwindled after Riley arrived.

After Tahzjaun’s exit, the rose ceremony began. Connor, Karl and drum roll please… Chasen were all booted off the island!

I do feel for Karl and Connor. These two boys deserved love, and unfortunately, they didn’t find any connections. As for Chasen, I was skeptical about his intentions. Remember, he used the term “smoke show”; need I say more? I was surprised but also not shocked that Deandra didn’t pick him. Oddly enough, it’s clear that the necklace was the last straw. In the end, Deandra picked Ivan, a decision I totally support. I actually had a gut feeling she’d choose him, it’ll be very interesting to see how they progress.

The next day, Tia, who had her heart broken by Colton, made a grand entrance into paradise. She pulled aside Kenny, which made Demi fume with anger. The girls began to insult Tia’s looks, specifically her hair and Demi flaunted over how her’s is better. If we’re going to insult anyone, it should be Kenny not Tia who has no clue of anyone’s relationship status. To add more fuel to the fire, Tia asked Kenny on a date. Demi was ready to pounce and Tia kept saying she was genuinely scared of Demi.

Meanwhile, Abigail and Noah had an essential chat about their relationship. Abigail questioned whether their connection was more of a friendship and that really rubbed Noah the wrong way. I’m nervous about the future of this couple. If they don’t start communicating properly, I could see it ending soon.

But, back to Kenny and Tia, they had a very odd date. Has anyone ever heard of naked volleyball? Me neither! Kenny stripped naked, Tia just took her shirt off, and they played volleyball against another naked couple. It was… interesting. As the date went on, Kenny and Tia both shared a kiss. Let’s just say, the wrath of Demi won’t be pretty!

Oh, and If you didn’t think things could get worse, Kendall showed up in the last few minutes of the episode. How rude of them to make us wait till next week! It looked like Kendall didn’t even say hello to anyone else on the beach and went straight for Joe. “Hey butthead,” she says to Joe, who’s probably having a mental breakdown, and poor Serena, no one wants to be caught between exes.

Let’s hope this week goes by fast because I cannot wait much longer! See you then!!