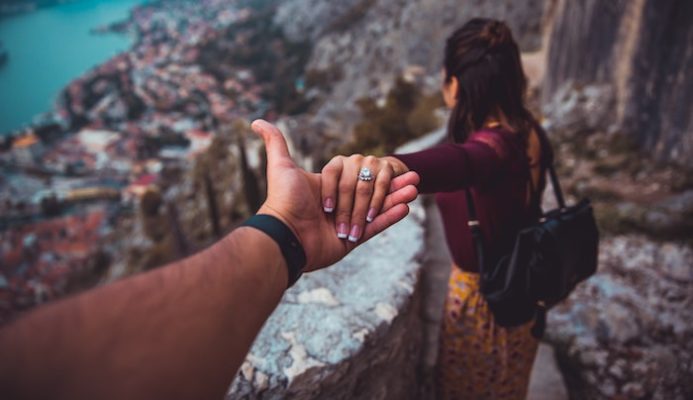 I used to think I was cursed. Or, maybe it was some kind of big, cruel, karmic joke. When I found out, over and over again, that my ex married his girlfriend after me. It had happened so many times that it stopped surprising me, and I came to expect it even. My break-ups were followed by wedding announcements because all of my exes married the girls they dated after me. In a few cases, there was even some disturbing overlap… My exes ended up marrying the girls they dated while they were still with me. Like I said, cursed.

I spent the majority of my twenties engaged (ring and all) to a man who refused to set a date. He said that I pressured him into proposing and that he didn’t even believe in marriage anyway. Marriage was just a piece of paper and you could wipe your butt with a piece of paper. Weddings were an idiotic waste of money, he said. Eventually, we broke up and I was heartbroken, but not nearly as devastated as I was when a few months later I found out that he’d already married someone else and had a baby on the way! It turned out that he actually did believe in marriage… Just not with me, and that’s a tough blow to the ego.

Remember the scene in When Harry Met Sally when Sally calls Harry crying because her ex got engaged. “She’s supposed to be his transitional person. She’s not supposed to be the one!” Just like that!

In my case, it didn’t just happen once. It continued to happen, over and over again. Apparently, my exes didn’t have “transitional” people, and there was something about me that drove them straight into the arms of their soulmates.

Once, a man told me that he was in love with me (direct quote) and less than a week later, without telling me he was doing this, flew another woman to Paris where he proposed to her with a three-carat diamond that he obviously didn’t get at the last minute. They are happily married to this day. I see them cavorting all over the world on Facebook on a daily basis and he still can’t understand why I was upset.

I also helped another ex — actually, now that I think of it, I helped two other exes — pick out an engagement ring for women who were definitely not me. One guy even used my finger to size the ring. True story. In that case, luckily, I wasn’t all that tore up about it because our breakup had been mutual and friendly and I really liked the new girl. But still!

I can’t even tell you how many emails and Facebook messages I have received over the years from guys I dated who wanted to share their good news with me. They all went something like this: “I just wanted to let you know that the (day, week, month) after we broke up, I met the most amazing woman, and after a whirlwind romance (completely unlike the one I had with you, obviously), we are getting married!” Then they’d toss in a line about how sweet I was, so they knew I’d be happy for them (Really? I’m not that sweet), and how I was a great catch and would eventually find someone, too. These emails made me want to go on some kind of a crime spree, and because I’m good at exercising self-control, I usually didn’t answer them back.

Eventually, I finally did find a man to marry me.

We’ve been together for fourteen years now, though I’m almost positive that if we divorced he’d remarry within six months, while I’d spend the rest of my life alone in a house full of cats. So I think I’d better stick with him. Still, I can’t help but wonder what was behind this bizarre phenomenon. At the time I didn’t feel very good about myself. I took my exes’ engagements as proof that I just wasn’t good enough for anyone. I thought I was a fat, ugly, uninteresting, a failure at life. I couldn’t not keep a man, or make a man fall in love with me enough to drop to one knee and beg to spend the rest of his life with me. Now I know better.

The fact that I was incompatible with these guys was in no way a statement about my own self-worth. Some people just aren’t right for each other. That doesn’t mean that either one of them is unlovable or defective. It just means we weren’t a match, or at least not the kind of match that should last a lifetime.

Besides that, I’ll admit that I wasn’t always the best at picking boyfriends. Some of these guys were straight-up jerks and would’ve made horrible husbands anyway because they were mean, shallow, and self-centered. I honestly pitied some of their fiancées.

Looking back, the fact that I didn’t end up with them was an enormous blessing. That still doesn’t explain the timing, however. It wasn’t like these guys were eventually getting married after dating me, as most people tend to do. They were literally marrying the first girls they dated after me, and there was a clear pattern going on, so what on earth was it about me that made them marry other women?

A few cases were probably just coincidences. Most of this happened in my late twenties and early thirties, which is the average age for people in my demographic to get married. But after all these years, I may have a better understanding of what was going on here.

I believed that the transitional woman was supposed to come after me, without realizing that, in fact, I was the transitional woman. The guys I dated, for the most part, were coming down from their college years, and the hard partying, playing days of their early and mid-twenties. They were finally getting ready to settle down and become established in careers, but they weren’t quite there yet.

With my gentle spirit (that sweetness they all referenced), I helped these men make the transition from sloppy-drunk, college girl hook-ups to a more sensible, domesticated life.

In other words, I guided my boyfriends through the transition into actual adulthood. Because I exerted a calming influence over their lives, I taught them to have more mature relationships. I got them ready to be halfway decent husbands (I hope, anyway). It wasn’t a job that I had knowingly signed up for, but in retrospect, I’m glad I could be of service, in spite of the occasional bouts of angst and heartache it caused me. I’m no longer sad that all of my exes married their next girlfriends.

I’m actually kind of glad they all managed to find someone, and so did I.

How My Crush Made Me A Better Person Even Though We...

I Wear Black To My Friends’ Weddings So I Can Mourn...