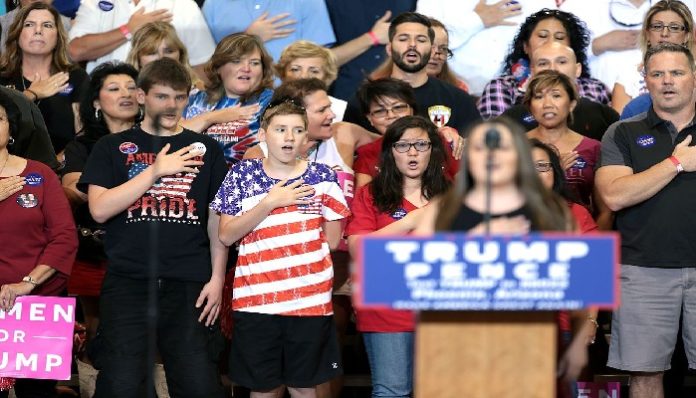 When Donald Trump first announced his presidential candidacy, we all thought it was a joke. But now, with his campaign propelling him towards a likely Republican nomination, it isn’t so funny anymore.

While Mr. Trump has said in the past how much he cherishes women, many of his beliefs and recent statements prove otherwise. Calling us bimbos and fat pigs, cracking inappropriate jokes about our place in society, and disregarding our wants and needs as women.

Is that the kind of man you really want running our country?

And yet, according to a Washington Post analysis, Trump’s female support is 28%, a number that shocks me. Because if you’re a woman voting for Trump, you may as well be saying the following things:

Trump has repeatedly reduced professional, successful women to their looks. He once told a female reporter, “We could say politically correctly that the look doesn’t matter, but the look obviously matters. … Like you wouldn’t have your job if you weren’t beautiful.” Perpetuating the belief that women are only good for their bodies is demeaning and discredits what we work hard for every day and our achievements in our careers.

Going off of #1, Trump sees women as the lesser sex. His frequent remarks regarding women’s sex lives and bodies make it clear he thinks we are more suited to trophy wife status than CEO. With women still only making 77 cents to the dollar, we need a president who will champion our cause and fight to provide us the opportunities and respect we deserve.

Trump is pro-life. That should say it all. By voting for him, you’re giving a sexist man control over your personal rights. You’re allowing him (and the government as a whole) to choose what you can and cannot do as a woman when it comes to your body. It’s more than just his stance on abortion though. Trump’s priorities do not favor women and our rights; instead, he is focused on building walls and cracking inappropriate jokes.

4. I admire qualities like arrogance and selfishness in a leader.

From his constant bragging about sexual conquests to his egotistical remarks, Trump cares about one thing: himself. He’s all about what HE wants (and what he thinks you should want too). His self-serving attitude doesn’t bode well for how he will run our country as he’s sure to overlook the needs of women and minorities in order to fulfill his own absurd desires.

Our country was built on freedom, on the people choosing our leaders, on the liberty to have our own political opinions. However, conservative or liberal, green party or tea party, Democrat or Republican, I think we all share one common goal: to make our country the best it can be. And I’m not sure how electing Donald Trump achieves that goal.

On Father’s Day, I Celebrate The Memories Of The Father I...