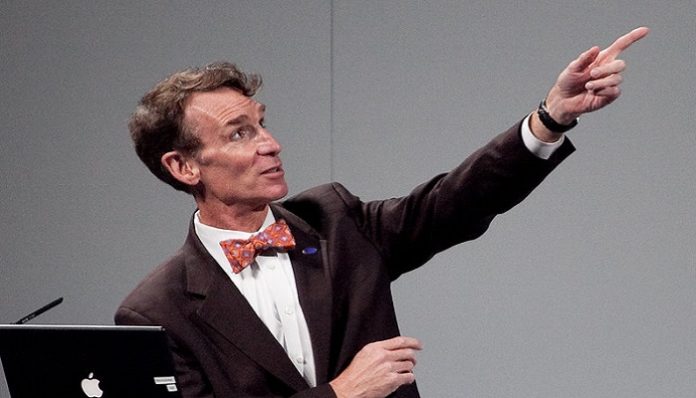 You know something is really wrong when our beloved Bill Nye “The Science Guy” is pissed!

Recently, the famous science celebrity appeared on Last Week Tonight With John Oliver. The host dedicated an entire episode to environmental matters, including the Green New Deal and carbon pricing. To help him explain these complicated science matters, Oliver enlisted the help of Nye. Nye delivered an amazing performance throughout the last half of the episode.

During his appearance, Nye droped the F-Bomb more than once while discussing the problems with our planet today.

Not only did Nye’s candid, graphic language create audience laughter, but it also blew up Twitter. Millennials grew up watching sweet, smart Bill Nye The Science Guy at home and in science class. It’s hard to imagine any of our childhood idols swearing, especially ones like Bill Nye.

Regardless of your feelings on Nye’s profanity, global warming is a very serious matter that we continue to ignore. According to NASA, “the evidence for rapid climate change is compelling,” and occurring roughly ten times faster than average ice-age-recovery planetary warming. We’re experiencing less snow, less ice, and melting glaciers. The result means rising sea levels.

Nye’s facts about the rising temperatures are spot on, too. NASA says that the average temperature on Earth rose exponentially over the past 35 years, with each year since 2010 shattering heat records. NOAA records indicate that since 1880, the three warmest years on record are 2015, 2016, and 2017.

Bill Nye is right: the Earth is literally on f*cking fire, yet nobody seems to care.

The path towards saving the planet won’t come from Baby Boomers or even Gen Xers; we’re the ones who need to step up and figure this sh*t out. While banning plastic straws sounds all fine and dandy, that’s not going to do nearly enough to turn the tables. The biggest way we can impact climate change is by limiting the use of fossil fuels and replacing them with renewable energy. We can apply pressure to major corporations both as citizens and consumers. However, all of this requires investing our time and energy to this cause.

Some Millennials are making important life decisions based on current climate conditions, though. For example, many young people are choosing to have fewer children or no children at all due to the ticking clock of climate change. Some young adults are becoming increasingly politically active as well.

However, many people our age seem more concerned with turning major world issues into memes than actually making waves towards change.

Where do you fall on the climate change spectrum? Are you willing to stand up and curse to wake the people around you up? Or will you sit in the background, laughing at the GIFs coming out with Bill Nye’s stunt?

8 Life Lessons I Learned From Dating A Transgender Woman