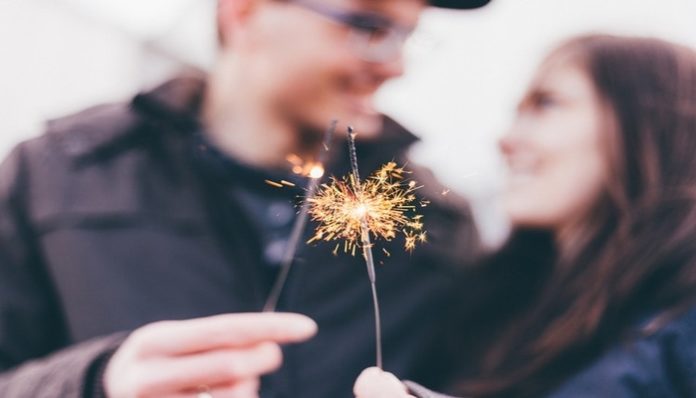 The first time I saw you, you were standing by the door on New Year’s Eve, celebrating one of the best times of the year. It wasn’t the loudest, biggest celebration, but it was probably special enough for us. We were both on holidays, in a city so beautiful and cozy.

We stayed at the same hostel, so I guess we can both agree that we know exactly how to travel cheap.

There you were, holding the door for a friend, keeping me from getting out as I was desperate for a drag. I can’t speak for you, but I’m pretty sure I caught your eyes as you  apologized for taking too long to move. You smiled, just a little, probably just to be polite, and then you went on with your business, and I went on with mine.

The next time I saw you, a few hours after that brief encounter, everyone was gathering in the common room for the New Year’s countdown. This time, we didn’t just smile at each other.

I remember you laughing out loud, probably already a few beers in. You were talking to a group of people you’d probably just met. I joined in, and we started talking as well. And not long after we exchanged names, we danced and sang and laughed.

And then we needed more drinks, and you offered to come with us to get some because you were out of drinks yourself, only to realize I was out of cash for cigarettes. You bought a pack and promised to share it with me. I smiled, and God, do I hope you noticed it.

And then we talked more, and I got to know a little bit more about you besides your name. We started talking about where you’re from, where I’m from, what we do, and what we were doing in the city. Our conversation flowed freely; we blurted out random shit without having to think whether they were stupid or not because, well, we could blame the alcohol and the fact that we were strangers.

I found myself just spilling out everything I don’t normally tell strangers. At some point, I became too self-conscious, thinking that maybe, I was being too much, but you were just there. You were all ears and all eyes. You disagree but you were never condescending. Not once did I feel judged.

And then we laughed, and we danced, and we drank. We made fun of a lot of people together, judging a couple we both convinced ourselves was about to break up. You knew all the words to every song until Ed Sheeran played. We both agreed that his songs were shitty and cliché.

And you kept singing Billy Joel’s “Piano Man,” which instantly became the song of the entire holiday. And of course, we belted out “Bohemian Rhapsody” because, why the fuck wouldn’t we?

We turned a peaceful New Year’s Eve into a loud, fun party, which was exactly what I hoped my New Year would be, in a city I don’t know a lot about.

But the cheeky universe added you to my picture.

I welcomed 2019 with a stranger, but that night didn’t feel strange at all.

And then we were, walking in a city filled with snow, holding hands. And it felt safe, warm.

And then we shared stories over coffees and pizzas and beers and cigarettes. I shared a whole lot of me that led you to thinking I was the strangest woman you’ve ever met, and I didn’t really understand what you meant by that, I just took it a compliment nonetheless.

Then, we kissed, and damn it, you kissed like you meant it.

You kissed like you’ve known me all your life.

And then we looked straight each other’s eyes and smiled and laughed and went out for smokes and fist-bumped because somebody could’ve caught us, but no one did.

And then I asked you to tell me the secrets you don’t usually share, and you told me everything you could. Then, I found myself sharing a big chunk of my soul with you. Although it was freezing as f*ck, I felt warm because you listened.

Spending the night with you was wonderful, but then, it was time to part ways. We said our goodbyes and hugged it out like we had known each other forever.

Now, those cliché songs are all we have left, but they still put a smile on my face every damn time. I go back to that moment we met and everything becomes wonderful again.

I can’t help myself from thinking, though: We were strangers who became one-time lovers for a magical night of fun. If you weren’t miles and time zones away from me, do you ever think we could have worked?