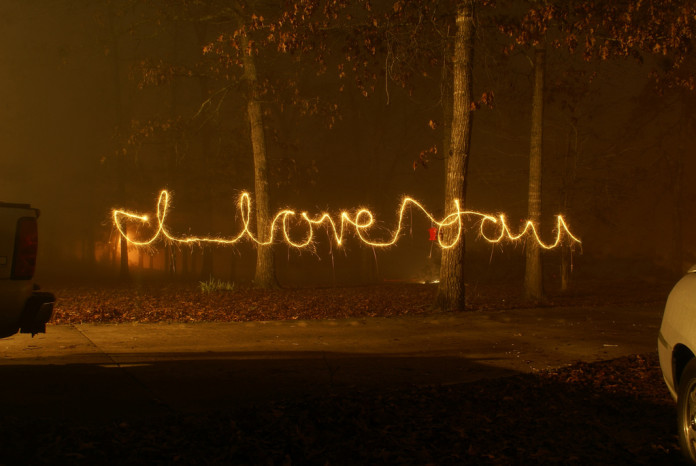 Till this day I’ve never said ‘I love you.’

As a soon-to-be 21 year old, I’ve yet to say those three magic words that link you to another person for the rest of your life. But, even so, maybe the person you say ‘I love you’ to is not your soul mate, maybe you won’t marry them, maybe the two of you won’t even be together come next year but – in the very moment those eight letters escape your lips – you are emotionally naked with that person who, regardless of the future, will always have some piece of your heart.

Yikes. That seems scary… but is saying those eight letters really as nerve racking as it seems?

Maybe love works that way, too. In the beginning, things are scary and overwhelming. That highway seems way too big with too many speeding cars. You can’t possibly dodge all of that traffic or weave in and out of lanes. You might crash and burn or even collide with a tree or another car. But then you glide off of the exit ramp and, by some miracle, there are no trees or burning cars in your way. You forget about the speed limit and keep up with the flow of traffic. Your fingers relax on the steering wheel and you notice your favorite song is playing on the radio. You made it past that first and will never look back.

It seems silly to me that saying ‘I love you’ for the first time is so built up and dramatic. Magazines write about it, stressing the “right” time and the “right” moment – as if there’s ever a right time to express how you’re feeling. Girls and guys alike obsess over who says it first, determining the pros and cons of being that person. But if you really think about it – after you say it once – don’t you just say it casually again and again? It is only that first time that carries any real meaning or weight. That first time that carries any responsibility of real, raw, naked emotion. I could have said ‘I love you’ before. But I didn’t.

Because of that vulnerability, because of that fear of the unknown, which encompasses every first time, I chickened out. I took a turn away from the highway when I could’ve easily gotten right on.

No matter what we do in life, the first time is scary. But if you really take a second to think about it, us 20-something year old college girls have already gone through a lot of firsts, which, following the initial butterflies and stomach pits, are now easy and natural. So take the plunge. Dive right in. Say ‘I love you’ even though you’re scared.

Because if you never get on that highway, you’ll never get anywhere.

How To Protect Yourself From Falling Victim To Fake News

5 Things We Should All Ask Our Grandparents